I have my nerdy Excel chart which plots my actual weight vs my target weight on a week by week basis. My target is a healthy 2lbs loss a week, which if you look up any weight-loss plan you will see is the ideal amount of weight to lose a week. I am happy with this slow steady approach as I have dieted before and dropped weight quickly, but put it back on as quick as soon as I fall off the wagon.

Looking at my chart, you can see I have had a steady loss (if you ignore the bumps in the road). I had two weeks were I put on weight and a few weeks where things plateaued a bit but I’m going to put that down to the fact it was my 30th birthday and the weeks were filled with late nights, dinners out and lots of drink. 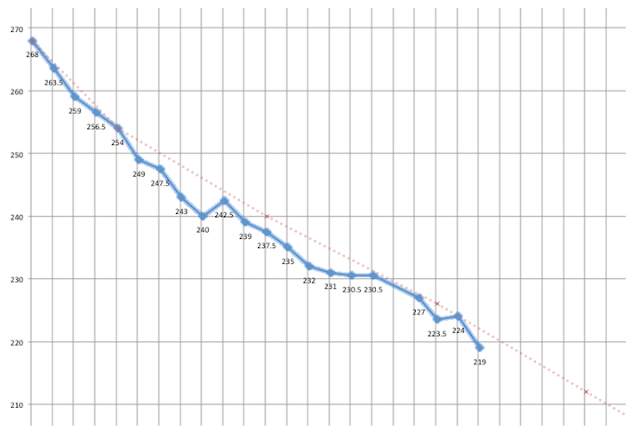 My last weigh-in before Christmas was the 18th of December where I weighed in at 16st 6.5lbs (230.5lbs) – the exact same as I had weighed in the week before. I remember leaving class feeling really disappointed in myself and as I drove home from Weight Watchers that evening, I thought to myself:

Christmas is coming… I have two weeks off work… I have no excuses!

That night I made myself a promise that for the two weeks off, I had no excuse NOT to do something every day. With that in mind, Christmas was a success… I lost 3.5lbs over Christmas thanks to my dedication and trust me, that wasn’t through dieting over Christmas. I indulged my greedy inner Chocolate Monster with plenty of Roses, Irish Coffees etc and had a great Christmas!

How my indulgence worked in my favour was due to my starting daily exercises.  Anyone will tell you I am the laziest person… like in the world… EVER! I drove down to the shop which is just around the corner, I wouldn’t walk across the road unless there was a Supermac’s on the other side. I’m plain and simple lazy! The weight I lost before Christmas was all done without a single bit of exercise.

I downloaded the Nike+ Running app for my phone which allowed me to track distance, route and the time it took me to complete a walk. I also made the the decision not to drive to wherever I was going to walk. I found this key in having an exercise routine. Anyone from Galway will know that the Prom in Salthill is a hotspot for walkers, joggers, rollerbladers etc as you have about a 4km route from car to kicking the wall at the end of the Prom and back.

The prom is scenic, has wide footpaths and ample parking so is ideal for a walk. My problem was the 20 minute drive from my house to Salthill which can take longer depending on traffic. The local area around where I live is lovely but not as scenic, has narrow footpaths, no street lights and is… dull. As soon as I told myself to get over that, I found myself walking one of two routes daily – one which clocked in at 4km through the village and is street-lighted the entire way. The second is 6km but there isn’t a single street light so could only be done during daylight.

When the new year rolled in, I found myself back at work (I work 8.30-6.00) so it was dark in the mornings leaving for work and dark in the evenings when I got home. This meant I could only do the 4km route through the village for my own safety.

It was during my first week back at work I saw a post on Facebook from a local fitness shop (Amphibian King) who were starting up a ‘Couch to 5K’ type program every Saturday morning. Hand on my heart I promise you – I have never ran for anything or anyone before in my life but thought, hey – If I can start running then I’ll get in and out from doing my exercise quicker (I’m lazy remember, so the thoughts of getting exercise in quicker than usual appeals to me!)

On Saturday, January 12th – Myself and my friend Emma turned up at 8am for the first session of the ‘Couch to 5K’. We walked/jogged 3.1K in just under 27 minutes. I remember coming back from that session wrecked – so much so I fell asleep on the couch at 9am for two hours afterwards. My body was probably gone into Toxic Shock Syndrome!

The following week (January 19th), we ran 3.7K in 33.5 minutes as the jog/walk intervals had gotten shorter. The following Saturday, I didn’t attend the ‘Couch to 5K’ session so made up my own (cause I’m a pro now at all things running!) and I covered 6K in just under 50 minutes. That nearly killed me though – partly because I brought my dog along who zig-zagged in front of me the whole time. How I didn’t end up crumpled on top of him in the middle of the road, I’ll never know!

Yesterday (the same day Galway flooded), I put on my running shoes and high-viz jacket and took off into the night… I ran 5K in 37 mins 10 seconds. My fastest 5K ever… in my entire life! At 30 years of age, I’m embarrassed my fastest 5K is 37 minutes… At 30 years of age and having never run 5K before, I’m so proud of myself! 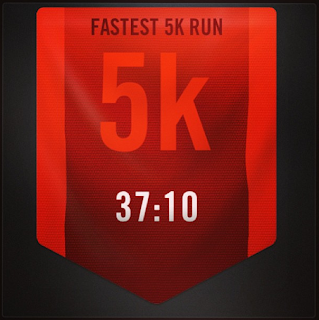