on July 29, 2015
I wasn't too bothered about taking part in this years Ring of Kerry cycle but come pre-registration day FOMO got the better of me and in a last minute rush of blood to the head, I phoned Aisling and we signed up. She didn't even have a bike, I had to dig mine back out from somewhere in the back of the shed. We went on two cycles prior to the 180km Ring which in hindsight is probably the dictionary definition of 'How NOT to train for something'.

I had been in Brussels on holidays the week before the cycle so I came home two days before the cycle stuffed to the gills from one too many Aperol Spritz and delicious Belgian chocolates. Myself and Aisling were planning on heading to Killarney at 3pm on Friday in advance of our intended 6:30am departure time the following morning. But unfortunately for Aisling, it wasn't meant to be, she turned up at my door on Friday evening looking like death warmed up ever so slightly. With a heavy heart Aisling went home to duvet while I drove the three hours to Killarney with the music pumping and the windows down, bike in boot.

I got to Killarney just before 7pm where I finally got to meet the wonderful Derick (@chefyd) and Edel (@dellers) at Registration. We even had time for a selfie before I ran off to meet the gang from work as we were all staying together in Neptunes Hotel. It was early(ish) to bed as they decided to aim for a revised start time of 6am. I was kinda flummoxed as my original plan all along had been to trudge on with Aisling but suddenly I was facing the prospect of cycling it on my lonesome. The work gang had been training together and had their own plans for the day so I didn't want to be holding anyone back (bearing in mind this was going to be my third cycle this year!) 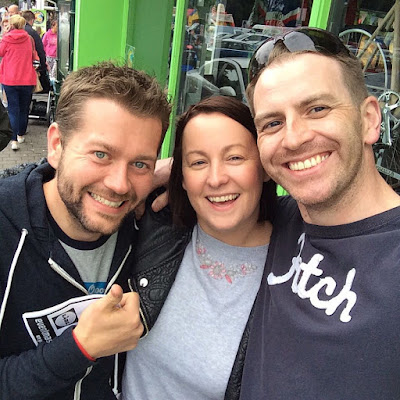 My alarm went off at 5am and following a quick breakfast in the hostel, we got a quick photo of the work gang at the start line and we were off... By the first kilometre I had lost everyone from work (dammit!) but I happily peddled on. The experience this time around was so different to last year as I knew what was ahead of me. I still took in the fantastic atmosphere and had the chat with loads of cyclists as I made my way around the first 60km to the food stop in Caherciveen. 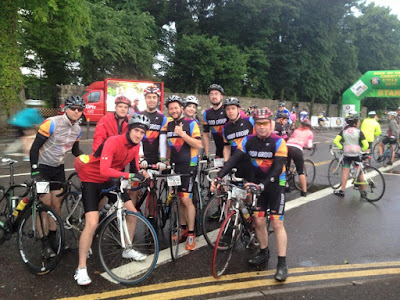 As I parked my bike, I met Joe, Caitriona and Barry (from work) who all had cycled the first 60km on their own. We must have been only minutes apart. The work kit is great as you can spot it a mile off but as it had been raining, everyone was wearing jackets! After a quick 15 minute stop, the four of us headed off together. Myself and Joe lost Barry and Caitriona about 5 minutes in to the second leg of the journey. I was so glad to have company for this section as I felt I needed the distraction (Thanks Joe!). 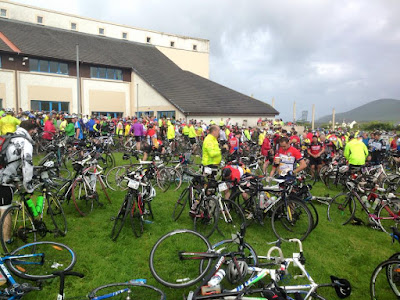 As we reached the Coomakista Climb (90km), we met back up with Barry and climbed the peak together. The views from the top made the climb (which seemed so much longer this year) worthwhile. After a small pit stop (and water refill) we enjoyed every bit of the downhill ride and cycled together to the food stop in Kenmare (140km). This is the main difference I find with cycling versus running - it's so much more social. We could talk, stop, grab a Nature Valley Bar (they were everywhere!!!) - there was no major panic or rush to finish and every time someone fell behind, we waited. 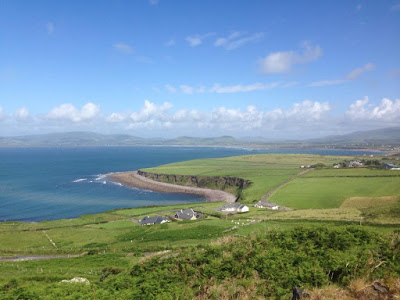 The view from the climb up Coomakista 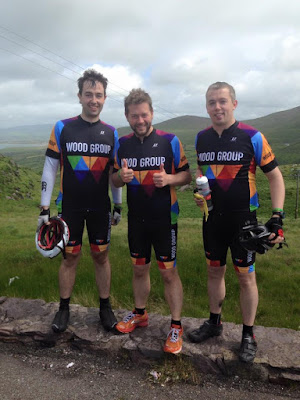 Taking a break at the top...

The food stop in Kenmare was like a mirage when it finally appeared (the signs kept claiming Food Stop Ahead which lead us to believe they meant just up ahead, not another 15k ahead). Again we were spoiled in Kenmare with enough sandwiches, Jaffa cakes and tea to feed an army. It was after 2pm and we knew we just had the climb to Molls Gap to get over and it was plain sailing home. The climb was tough, a lot tougher than I remembered it being - maybe I was tired, or my lack of training was showing but I've never been as happy to get off the bike at the top. We had time for a quick selfie with the lads and then we freewheeled down the far side of Molls towards Killarney. 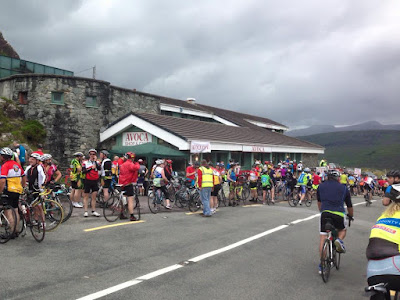 At the top of Molls Gap

We finished just before 4pm which ironically meant I completed the Ring about 15 minutes faster than last year. In reality, the stops weren't as long as last year but still, I while I was quite chuffed to get my finishers certificate, I was happier to get a pint at the bar in the finishers area. The Ring was yet again enjoyable and something I'm glad I did but if I'm honest, it didn't have the same magic as it did for me last year. Maybe it was because I was missing Aisling, or maybe because I hadn't put any work into training for it so I didn't have that inner sense of accomplishment like I didn't last year, so much so, once I got back from Kerry, I put the bike straight back into the shed where it'll more than likely stay until FOMO kicks in next year and I sign up again for the 2016 Ring. 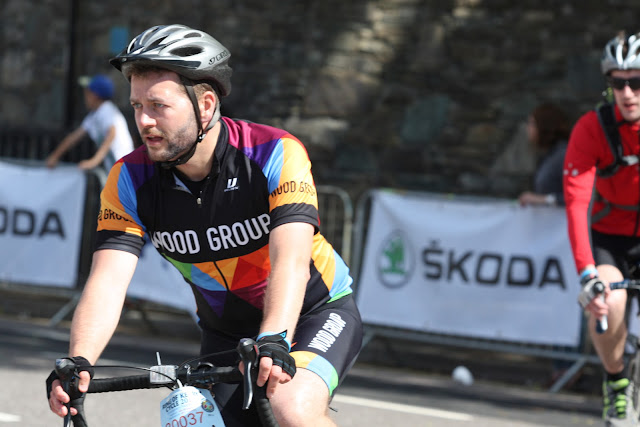 BOOM! Coming in for the finish! (Pic by Killarney Camera Club - Link) 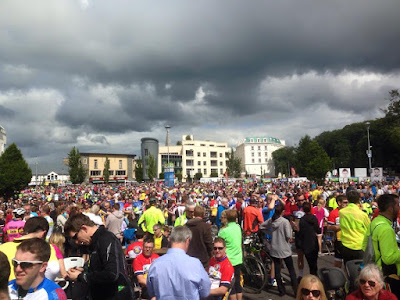 As I've said already, the thing I love about cycling is the social aspect to it - and nothing like 11,000 cyclists to make a city come alive. Killarney was buzzing Saturday, and after dinner with the work gang, we hit the town which was buzzing (and wedged). I got to meet the handsome Alan (@alanjdaly) who had also cycled the Ring and his equally dashing other half, Samuel (@huntersr86). We spent the night dancing to the most random tunes (think Wyclef Jean followed by Maniac 2000) in the most random late bar. I fell in the door of the hostel after 3am wrecked... but happy. 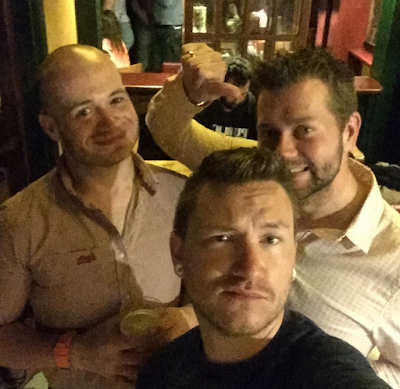