on October 02, 2016
Considering the fact Run Galway Bay is the largest road race in Galway, Its kind of funny that I've never run it. This race attracts huge numbers across its three distances (10K, Half & Full) and is always at the start of October and is one of the last big races in Galway of the year. I actually only signed up for this race last weekend (I won a free entry on their Twitter) and decided to roll my scheduled long run into the Half so planned on going out and taking it easy for 21km around Galway Bay.

I made my way to Claddagh Hall (start line) for around 11:30 as most of the 10Kers had finished (they started at 10am) and some marathoners were passing by doing loops (they started at 8:30am). The route consists of a 10K loop from Claddagh out along the Prom through Salthill and out to the Barna Rd before doubling back. The Half has a single lap of South Park (1.1km) and the Full had two laps (2.2km) before heading out on the 10K. Sounds complicated but really was quite straightforward. 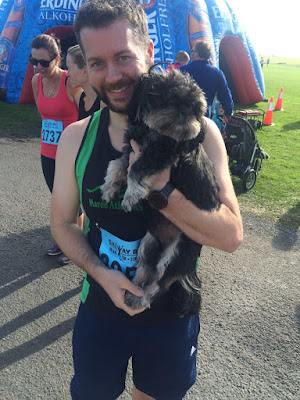 Hanging with Toby before the race start!
(Check him out on IG: www.instagram.com/tobyonhenrystreet) 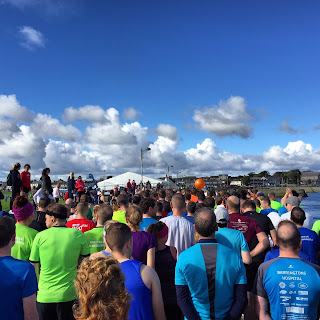 The Half Marathon started at 12:15 and after one loop of the park, we made our way out along the prom and into Salthill. Honestly, the kilometers were rolling by without much thought so I wasn't going to question it. The route was packed with runners in both directions which made the run quite pleasant as you always had something to keep your attention. I was conscious of my pace as I was consistently hitting 5:00/km which is faster than my planned long run pace (around 5:30/km). I think actually the 1:45 pacer losing his balloon half way around helped be ease back a little as I wasn't trying to keep him in my sights. 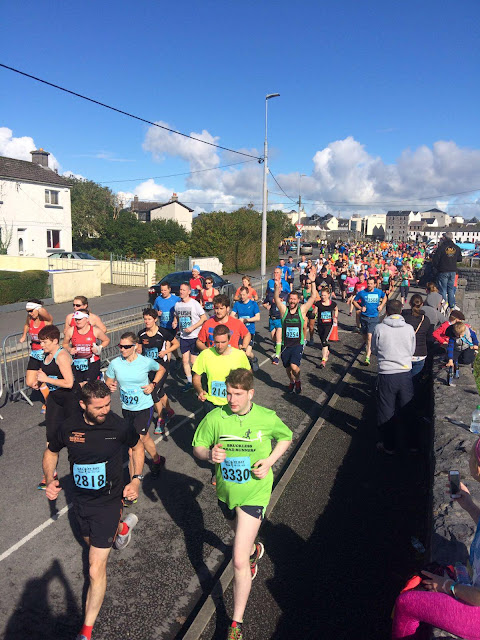 Snapped by Lisa (thats me with my hands up)

We looped back around by the Finish Line at around the 11.5km mark which was actually the only low-light of the entire experience. Having to pass the finish line and know you have the same loop to do again is kind of disheartening. I don't know how the marathoners did it four times! As I made my way back out the prom (12/13km) the lead male was already on his way back past me. They were actually the things that made this race special. I passed friends and fellow Maree AC members on route a few times which is something that rarely happens in a race.

Before I knew it I was down to the last 5km as I made my way back in along the prom. At this point I knew I was in trouble. I committed the biggest sin known to runners, I broke the 'Nothing new on race day' rule in that I was wearing brand new shoes as last weekend, my old pair kicked the bucket when the insole shifted and left me with a large blister on the side of my foot. I said I'd try new shoes on this run but 16km in, I could already feel the blisters on both my feet. Ouch.

The last five km passed as quickly as the first five as I made my way back to the finish line. I crossed the finish line with a chip time of 1:47:23 - delighted! The finishers tent was crammed with cake, coffee, water, sandwiches and beer but I was more concerned with getting back to the car and taking my runners off than I was about cake (first time ever thats happened I reckon!) 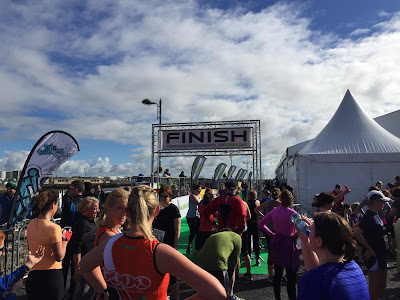 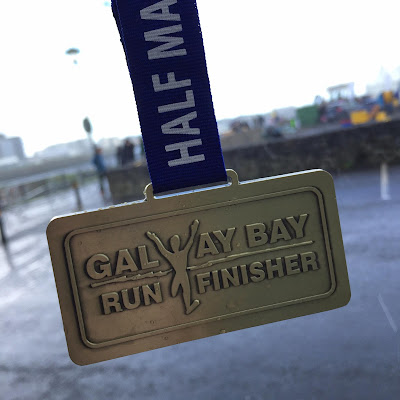 Overall, this was a thoroughly enjoyable event, excellently organised and well worth doing. From the O'Hehir's lady giving out sweets at the end of the prom, to the marshalls, the route, the crowd and the overall atmosphere, I'd definitely recommend this for anyone next year. The sun even came out for us (its October and it felt more like June). My only gripe was what seemed like the random start times but I'm sure this decision was made from logistical point of view (the best way to spread out the runners over the day instead of crowding the course at any point with thousands of runners).

I have one last long run next weekend (32km) and then its taper for Dublin Marathon at the end of the month. I always love the training after its done but when you are in the middle of it sometimes its hard to see the woods from the trees. Am I looking forward to Dublin? I don't know... Was I looking forward to Galway Bay? Not really but I did really really enjoy it. Never second guess how a run will go on any day! 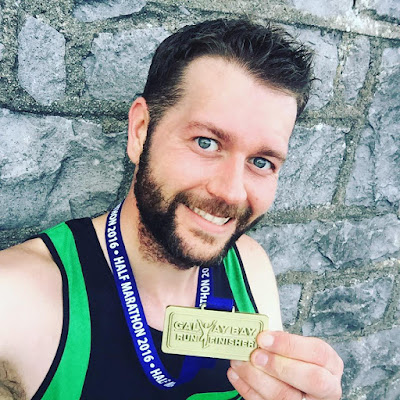 Half Marathon #16 in the bag - next stop: Dublin Marathon