When the going gets tough...!

on January 05, 2017
Disclaimer: If you are looking for an inspirational weight-loss post, I'm afraid this isn't going to be it. This also isn't a pity post, I just wanted to come back online and write out how I'm feeling as I've always found this blog a great way for me to be accountable to myself.

I have been absent from the blog for the past two months - Here's a quick overview: I ran the Dublin City Marathon at the end of October, went to New York on holidays, celebrated my birthday, enjoyed the run up to Christmas, still went out for a few runs, stopped going to weigh-ins, fell off the wagon, ate, drank and partied. It was all fun and games until this Tuesday just gone (Jan 3rd), when I went back to work and back to Weight Watchers for my first class in seven weeks.

I was up 13lbs. That's 13lbs on top of the small weekly weight-gains that had been creeping on in the latter half of the year but I hadn't really been paying attention to. This meant, as I stood on the scale on Tuesday evening looking at my weight: 15st 2lbs I've realised that I've only let myself down, I've slipped up badly! 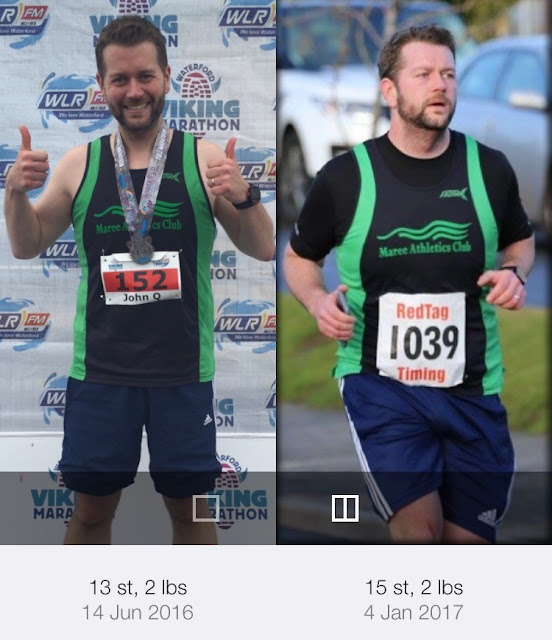 The pic on the left (above) was taken in June this year just after I crossed the finish line after the Waterford Marathon with a PB (3:46). The pic on the right was taken at the Fields of Athenry 10K on Stephen's Day. I actually don't even know what to say - I'm annoyed with myself. I'm disappointed that I let myself slip so far backwards while at the same time I was aware of what I was doing along the way.

Not only have I been carrying around extra pounds, I've also been battling big time with a negative mindset/attitude towards myself - both of which have been weighing me down in more ways that one. The funny thing is, I know exactly what I would say to a friend in the same boat but for some reason, I don't know why I can't tell myself.

The fact that I've done it before (lost weight) doesn't make this any easier. I've said before and I'll say it 1000 times: The first pound is as hard to lose as the last. Unfortunately Losing weight doesn't mean that it's gone forever and on the same hand, gaining weight also doesn't mean its forever! If there is one thing I know to be true, its the power of starting now and taking things one step at a time. I'm not going to stare half way down the corridor at where I was, I'm going to focus on the next step.

On Tuesday I faced the scale. Yesterday I laced up and went out for my first run of the year. Today I'm facing you guys with the blog. I know there is no quick fix solution. I know I'm not happy heading in the direction I've been heading in so thats why I'm dusting myself off, turning myself around and focusing on just taking the next step. 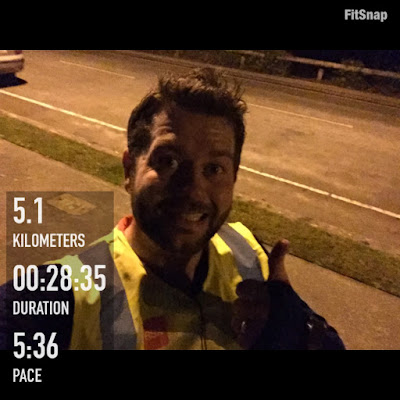