on October 23, 2017
Rewind back to this time last year, entering the ballot for the Chicago Marathon (one of the world majors) seemed like an excellent idea. I couldn't believe it come December when I secured a place - it was like my Christmas present to myself. Of course my training intentions were honourable at the time - I was going to train hard, run fast and smash some new running goals along the way. The reality however, was very different and I found myself boarding a flight to Chicago three days before my tenth marathon with only a fraction of the milage planned under my belt and the bare minimum of training coupled with a mind weighed down with doubt and worry about how the race would unfold.

On the Friday morning, myself and my aunt made our way out to the Expo thanks to the free buses they had put on. It was my first time in one of those trademark yellow american school buses so that in itself was Bucket List territory. The expo itself was pretty easy to navigate and work around. After I collected my bib, we walked around the stores and stands of the main hall, chatting to other runners and taking it all in. There is something so special about a huge marathon, you can feel the anticipation in the city air with the amount of runners in activewear with their clear plastic backpacks queuing in Starbucks or walking around tourist sites. 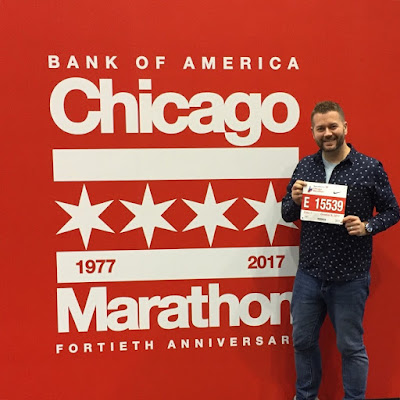 Bib collect at the Expo


After the expo, I spent the next two days hanging out with my aunt exploring Chicago. We went into full-blown tourist mode and visited essential tourist stops like The Bean, The Cheesecake Factory and The Art Institute. I had been tweeting a fellow runner, Stephanie, about the marathon as she was over for it too. She suggested we meet up for dinner on Friday night which was a lovely touch to an already epic break in the Windy City. 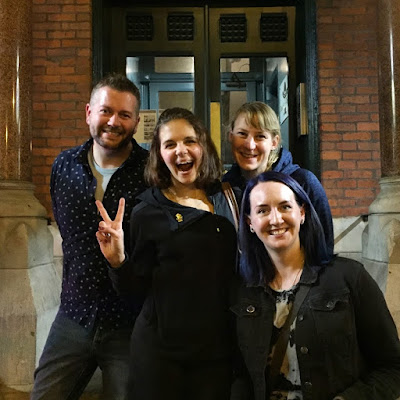 
Over the rest of the weekend I made sure I was fully carb loaded thanks to one too many pancakes, a real Deep Dish Pizza along with numerous stops into dessert places like Ghirardelli's. There was plenty of glasses of wine, milkshakes and cupcakes just to make sure I was fully fed. I was in bed at 10pm Saturday night in anticipation of Sunday's 26.2 miles which I wasn't 100% confident I was going to finish, but my belly was full (and happy). 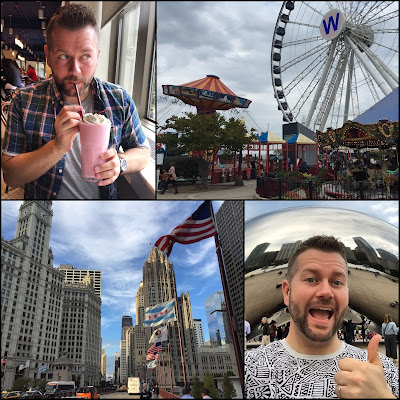 Exploring the City before the Race

I woke at 5am Sunday morning, had breakfast in my room and left the hotel at 6am. Security was beefed up around the start line, which I didn't particularly mind in the wake of everything going on in the States at the moment. I decided not to bring a bag to the start line as I couldn't deal with the thoughts of bag check afterwards, so with just $10, earphones, my phone and a transport card in my pocket, I cleared security and found my way into my starting pen, Corral E, just before 7am, all set for my 7:30am start time.

The start itself felt anti-climatic, possibly because of how I was feeling myself. My plan for this marathon was to run half, walk half - split up however I felt. I had imagined I'd run about 10k, then walk alternate kms after that seen as the furthest run I'd clocked up in training was 10 miles (16km). The first few miles took us through the inner city centre where crowds lined both sides of every street with signs and buckets of supporting words for the runners, and this was all before 8am in the morning. 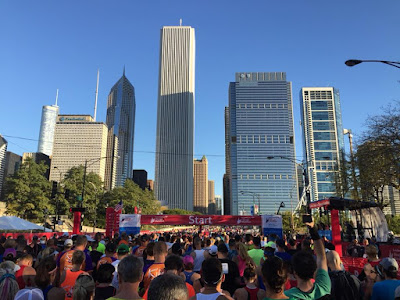 Just about to cross the Start Line...

Things started to heat up early on and once we'd escaped the high-rise buildings, I could feel the sweat starting to pour. I was taking things pretty easy, clocking up about 6 minute kilometers, so once I hit 10 miles, I was delighted. I decided at that point I'd run up to half way and then walk from there. If there is one thing I know about races, its that they are not the place to try something new. I hadn't run beyond 16km, so why push it. I crossed half way with 2 hours 10 on the clock and I knew at that point I could just walk to the finish (All runners must complete the course in 6hr 30 to be considered an official finisher - so even though the finish line would be open for hours, I needed to cross the finish line within 6hr 30). 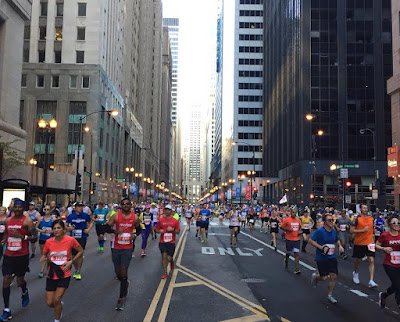 The remaining half of my Chicago marathon was absolutely amazing, and if I'm honest, it completely opened my eyes (and mind) to a side of the marathon I had never experienced before. I really enjoyed every minute of what I was going through. I never thought I'd ever be able to say that but it's true - I loved soaking up every bit of the route as I made my way back to Grant Park. Temperatures continued to rise (it was high 20s) early on - so I took my time and stopped at every water stop, I thanked the volunteers, high 5'd kids in the crowd and smiled at supporters as I walked the 21km to the finish line.

I took photos of the signs that made me smile, got a selfie with two drag queens singing Abba and took photos of performers as we went through Chinatown. I became very aware of the fact that its usually at this part of any marathon before, I've only focused on the end and never really taken it in like this before. I allowed myself to kick back and truly take it all in, as the next time I'm here, I'll be running it all non-stop. 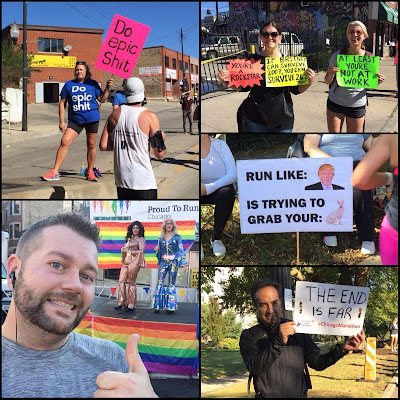 Another thing I've never fully experience before was watching the 'fall-out' from a marathon as I was in the back half of the field as I hit those at 20+ miles. I passed people crying, some limping. I saw one guy using a collapsable chair like a crutch to move himself forward. Watching other people dig deep as we all edged closer to the finish line was actually really inspiring. The best part however, in a sea of over 45000 people, I found Dani, a Boston woman I've been following on IG for years. So random, so perfect. I obviously took a selfie before she headed off and I walked the last few km home. 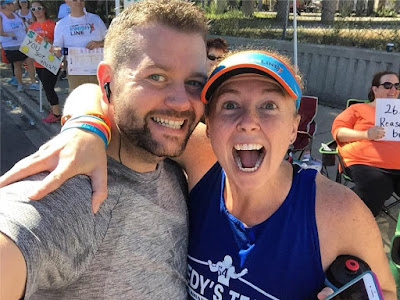 I crossed the finish line 5 hours 34 minutes after I crossed the start line. There are hundreds of inspiring quotes about marathon running out there but one of my favourites stuck with me as I collected my finishers medal at the far side of the finish line. A marathon is actually hundreds of miles training before a 26.2 mile victory lap. Part of me feels guilty and ashamed to have let this opportunity go to 'waste' but thats when I realised... Here I was after crossing the finish line, finishing the distance, without a bead of sweat on me. I'd gone the distance, all 42.2km of it, without much training. That in itself is rather incredible and although its not advice I would ever recommend to anyone, I'm actually rather proud of myself that I completed it. 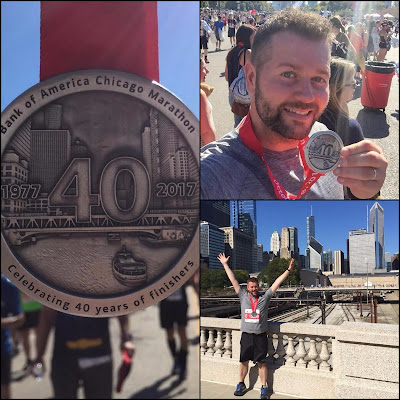 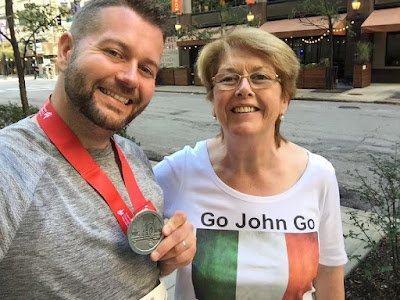 With my #1 supporter, my aunt!