on July 04, 2014
Despite having originally signed up for the 160K route and then changing to the 96K one, I was still quite nervous heading down to Ballyvaughan two Saturdays ago for the Tour de Burren cycle. I had planned on being at the start line early in order to have my bike ready and prepped however after a delay leaving home and then an unplanned petrol stop, I ended up getting caught outside Kinvara as the 9am cyclists took off. I arrived in Ballyvaughan at 10:15, signed in and got to the start line with minutes to spare. 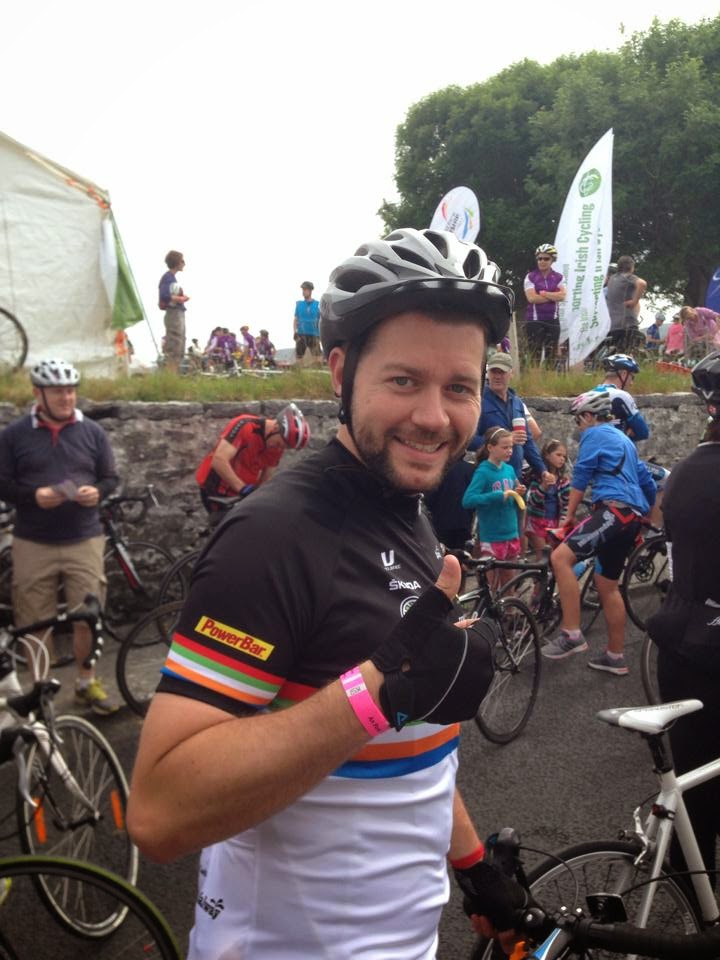 Waiting for the whistle

The whole thing seems to start effortlessly (so round of applause to the organisers). The route started by heading back along the N67 towards Kinvara which had a few small surprise hills along the way. It wasn't until we hit the Galway border and I realised we were turning up the Corker Hill. Bloody eck! Hills really separate the men from the boys in that, I quickly realised how little (i.e. no) training I had done. Thankfully I pushed onward and got to the top without having to dismount the bike.

The next 15km was a super cycle where I quickly picked up on the social etiquette of cycling on busy (well, busier) roads. I loved hearing people shout 'Car UP' or 'Car DOWN' as we made our way to Carron (the water stop at 30K) and as soon as we left I started in the ritual of alerting other riders to the presence of cars. It became apparent after about 5 minutes though that you do not need to shout 'Car DOWN' on a straight road where everyone can see. I can be such a gimp at times. 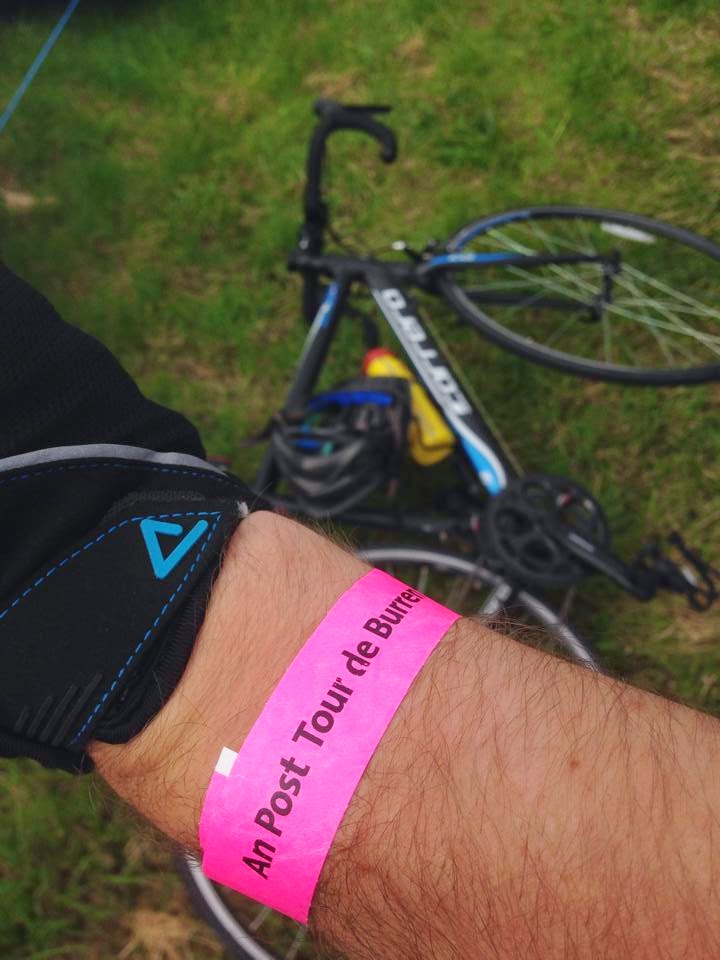 After the water stop I pushed on knowing that the next 30K was going to be the hardest. I still had Corkscrew Hill somewhere between me and the food stop - and I wasnt going to let any hill get in the way of this cheesecake everyone seemed to be talking about along the way. The one thing I loved about this cycle was the chats I was having with randomers the whole way around. I talked to two girls in Cycle Against Suicide jerseys about their experiences, I spoke with a man who was taking part in this as his first ever cycle. He told me why he started cycling and how much he loves the Burren. 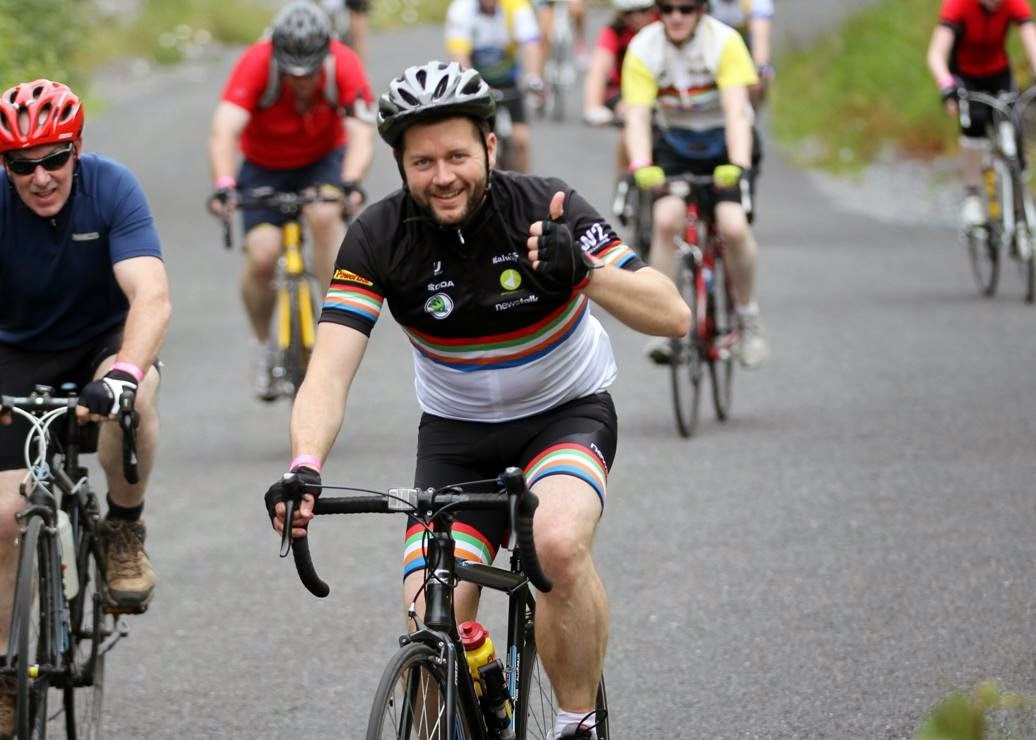 The 40K to 45K segment of the journey was all downhill. I loved it - I loved the speed, loved the view, loved the minimal effort required. A guy who passed told me Corkscrew was coming up so to enjoy the ride, and sure enough, as soon as we passed Ailwee Caves, we came back onto the main Ballyvaughan - Lisdoonvara road heading for Corkscrew Hill.

The worst part of the whole cycle was the Strava sign at the side of the road which read: 'Segment Start: Corkscrew Hill. 4.7KM', Are you kidding me? Don't tell me how long its going to be! I always though the Corkscrew was a cute (but lethal) hill I've only ever seen from the comfort of a car. Sure enough the gradient increased gradually passing Gregans Castle where myself and another rider contemplated popping in for a cuppa.

We started the Corkscrew climb and honestly it really wasn't as bad as it seemed. It's horrific when you can see a long straight road infront of you but sometimes not seeing is better - it gives you hope that the next incline MAY be the last. It usually isn't mind you, but it could be. I kept on motoring on as each cyclist gave words of encouragement to others as they passed by. One lady told me the food stop was just at the top of the hill. I knew she was lying but I admired her motivation pep talk. 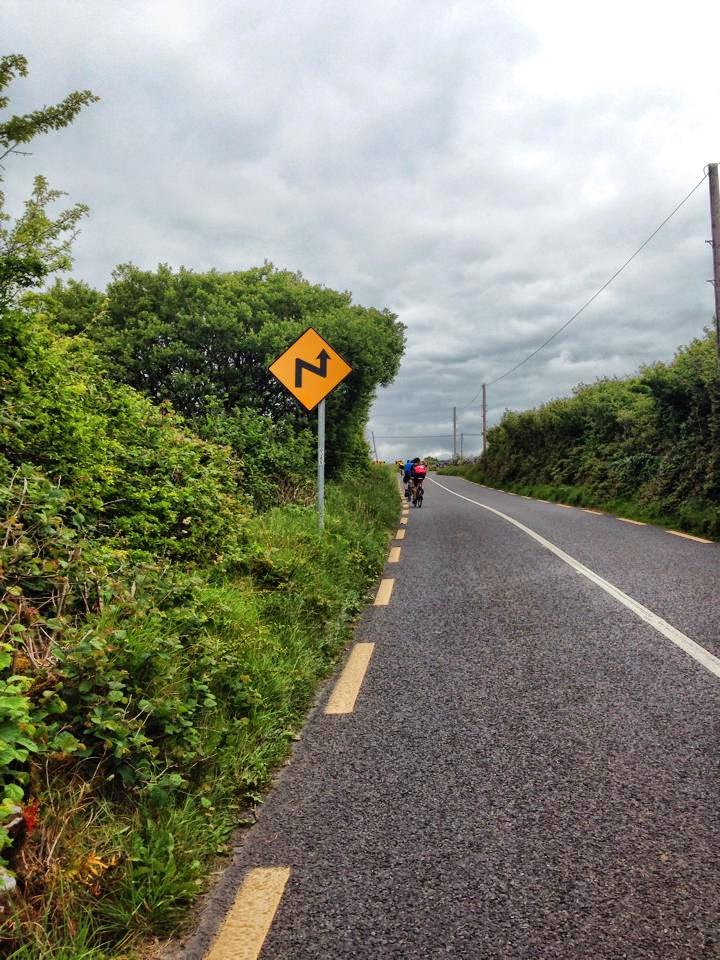 Heading up the Corkscrew

At the top, it was a smooth 8K downhill ride into Lisdoonvarna - which was starting to feel like a desert mirage as every sign I passed seem to keep saying I wasnt getting any closer to the village. I pulled into the Food Stop and walked straight into a gang of cyclists from work. I met Caitriona (who I cycled most of the Connemara route with), Daniel and Ronan. I will admit it was nice to see some friendly faces after a pleasant enough 60K, I knew I had a relatively flat journey ahead of me but my energy levels were starting to wane. 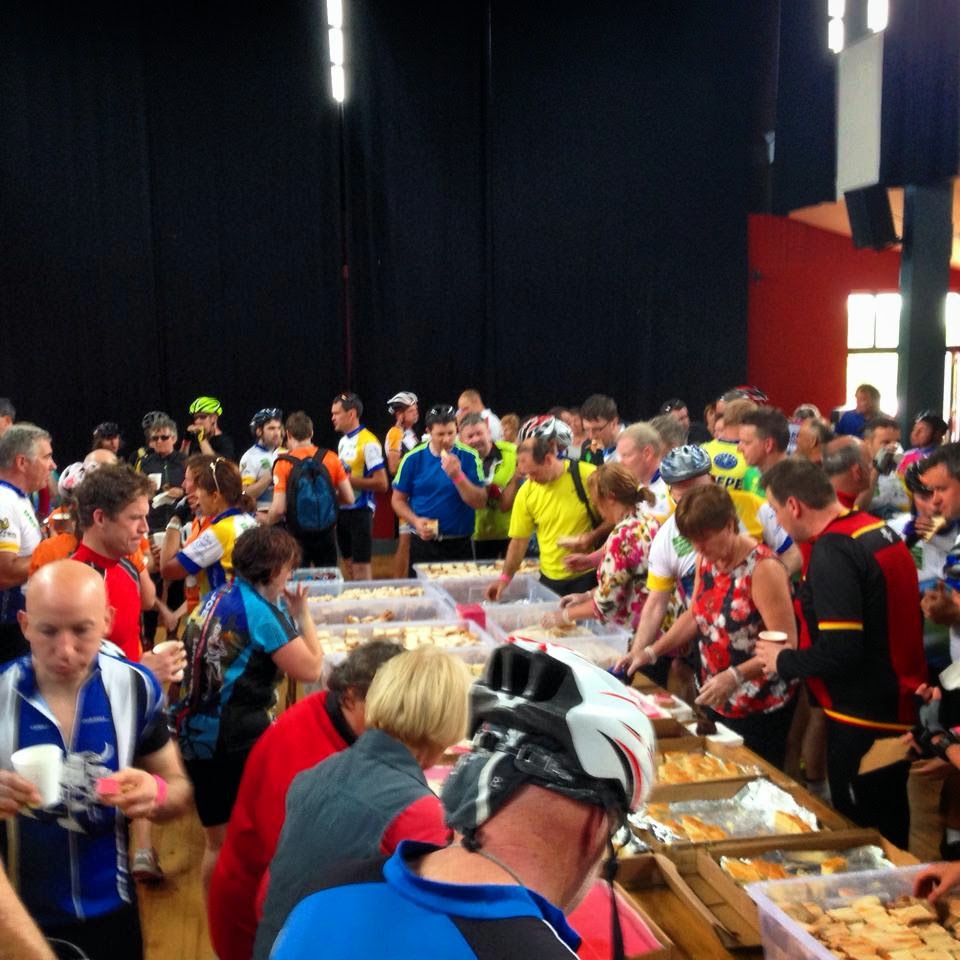 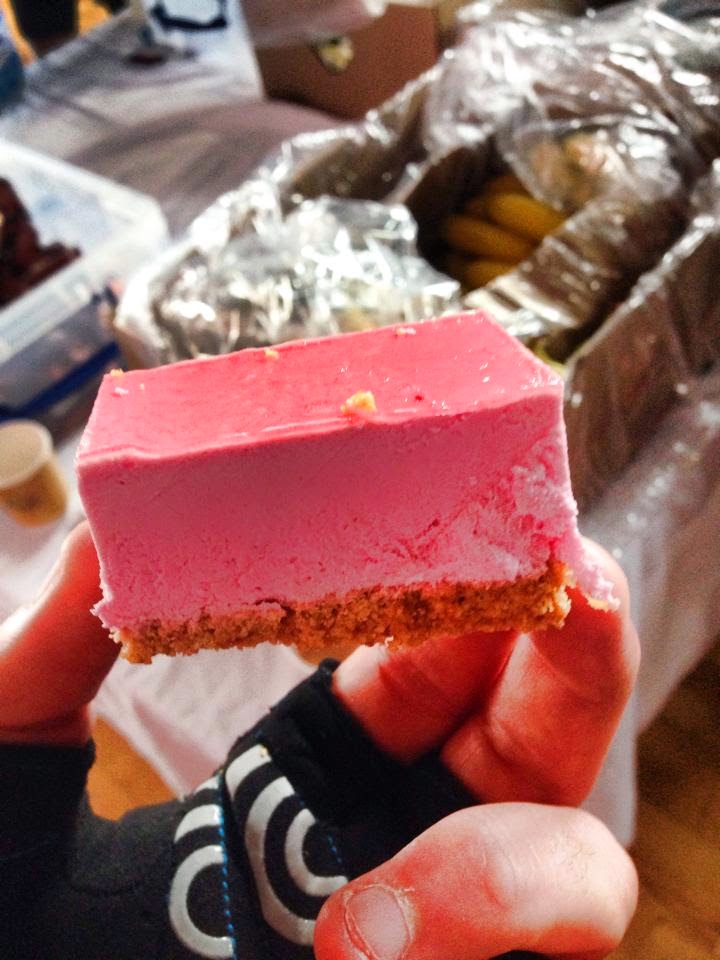 After refueling both my belly and my water bottle, myself and Ronan headed back off on the road as he said he'd ride the remainder of the journey with me back to the finish. I've never been happier. Chatting the whole way back, the journey around my Doolin and Fanore flew as we came back around the Clare coastline and back into Ballyvaughan about 4 hours 30 minutes after we left it.

96KM later, we were greeted at the Finish Line tent by Catherine from Clare Sports Partnership who had a giant hug for me :) HB were handing out free ice-creams so clearly I needed to devour one before myself and Ronan headed to Monks as he had been dreaming of Chowder all day. 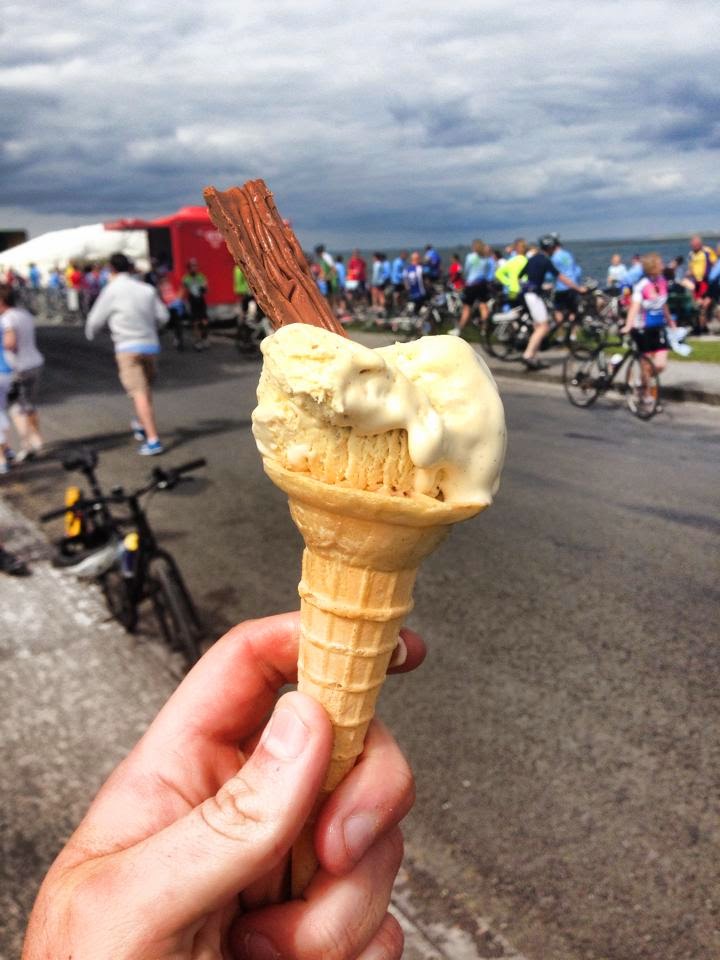 The flake was the best part...

I absolutely LOVED my first cycle around the Burren. Yes parts of it were a challenge but parts of it were simply breathtaking. People would pay thousands to travel to see parts of the world like it and we completely take it for granted and its right at our doorstep. Maybe its the Clare blood in me but I honestly think there is nowhere more beautiful than the Clare coastline. One of my favourite drives is the one down to Fanore so experiencing it on a bike was something I'll never forget.

The 160km cycle escaped me this time but its definitely something I am going to add to my Bucket List for next year.