on February 18, 2016
The 2016 Gorgeous Gort 8K took place last Sunday, on Valentines Day... so I couldnt think of a better way to spend my day than doing something I love (running) with Aisling (my activity wife!). We arrived in Gort before 1pm where we collected our race bibs and red race t-shirts. As it was Valentines, the organisers had a special couples entry where the first couple home (collective time) would win a prize. We joked about winning but then the fear of being found out would have probably sent waves through the Galway Running community.
😂😂😂 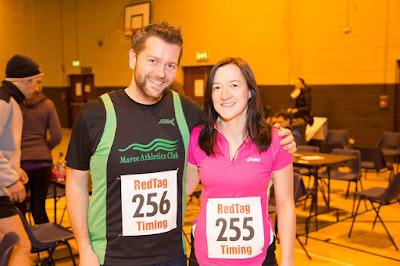 The race started at 1:30pm from the main road. I'd taken part in this run back in 2014 so I knew the route and knew what to expect. The weather was perfect for a run and as soon as the race started, I took off like the clappers. My goal was just to Sub 40 (under 5:00/km) but when I hit the first km marker at 4:21, I figured I was better holding back instead of going for it and dying later on.

The route brought us through the square in Gort and out the Tubber Road before turning left (3km) and back onto the Ennis Road (4km). I have a high dislike for races that bring you so close to the finish line but you aren't finished, this one sends you to the right (and uphill) just before the finish line as you run the final 3km on country roads before re-joining the Loughrea Rd and through the village into the finish line. 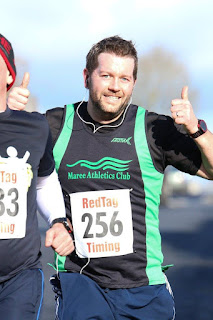 At the 7km mark (Pic taken from SGAC's Facebook)

It was a tough enough 5 miler but I was happy to keep my pace under 5:00/kms (except for the hill at the 5km mark) and I finished in 38:13. Aisling crossed the line one minute later (knocking over two minutes off her last 8km race and clocking up a new PB for 8K). We didn't win the couples prize (raging) but we did leave Gort happy out after the amazing feast in the hall. 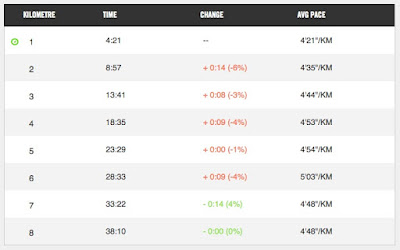 Also worth mentioning, we both had new runners on so who knows if it was the power of Brooks, the weather, the route or the Valentine's mood in the air but something definitely powered us both to run a great 8K. I have the Quilty 8K next weekend and my aim is to break 38:13 - I just need to remember to chill out and not take off too fast. You'd imagine I'd have learned to pace properly at this stage but I think the eternal optimist in me continues to believe I can do better. 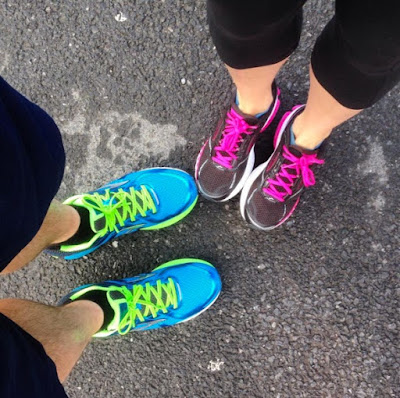 Me in my new Brooks GTS 16 and Ais in hers