on April 24, 2016
Myself and Phil signed up for the Longford Royal Canal Run partly for something to do on a Saturday morning (why not) but mainly because I need to get my ass in gear as its only nine weeks to the Waterford Marathon and I was looking for a bit of challenge. My last Half was in Athlone over six months ago and although I've been clocking up a few 21km+ runs lately, these haven't been under race conditions so I was really looking to push myself a little. 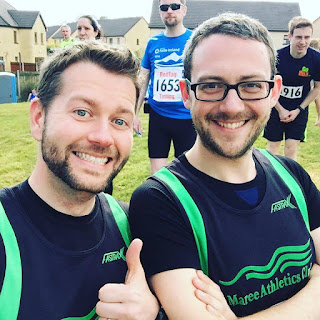 Myself and Phil ready to do loops!

We arrived in Longford just after 9am and made our way to the Canal where the Ultra marathoners were already on the course. The Royal Canal Run is a 5.3km loop around the Royal Canal just outside Longford town. The Ultra (10 loops) started at 8:30am, followed by the Marathon (8 loops) at 10am. The 200 Half starters their way (about 500m down the canal) to the start shortly after 10:30am while the 10km (2 loops) headed up the canal to their start. 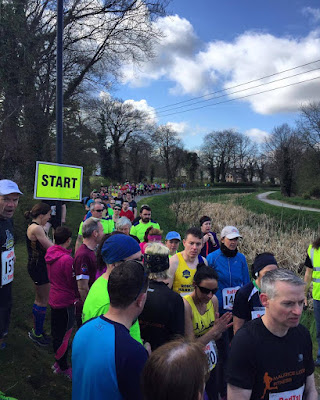 The Half Start Line

We started shortly after 10:30am and I took off alongside Phil for the first kilometre but knew I wasn't going to be able to match pace (4:45/km) so told him to head off. About 2km in, we looped back over a footbridge and made our way back down the far side of the canal. The flat, gravelly footpath was perfect and relatively uncongested as the 500 runners looped the course. The first lap was great to get your bearings, each time we looped back I could clock Phil ahead of me.

We passed the finish-line and water station at the start of each new lap. I was happy enough maintaining my sub 5:00/km pace. The finish line had a marquee and PA system blasting music which was a lovely motivator as you passed it each side of the canal while looping. Lap 2 was steady as the sun started to come out and warm up the day. Lap 3 was relatively quieter as all of the 10kers had finished and left the course.

The unique thing about this event was the fact you were doing laps which I found a great motivation as you were constantly overtaking people (and being overtaken) by others who you had no idea how many times they were on their run. It reminded me Sixmilebridge in that respect as while I felt tired on Lap 4, the person you were running beside could have been on Lap 7 or 3, could be PB'ing or struggling and I simply had no idea. As I hit the finish line on my last lap, I passed Mirko who was doing the full and had another 4 loops to go. I've never been as happy to stop running! Overall I was happy with my splits, the majority of them staying under 5:00/km (Not bad for a guy who was out at a black tie work function until 1am the night before). 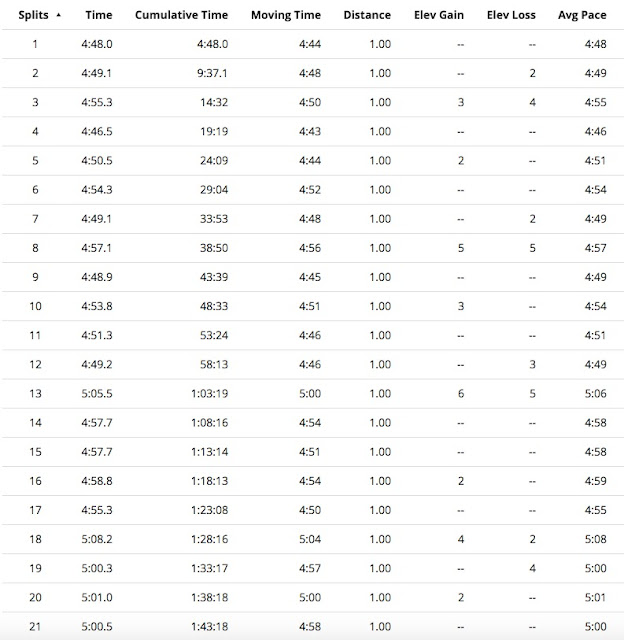 My official finish time was 1:44:09. My wish was to do 1:45 so all in all, my day was a success. The course was perfect, the set up was ideal and I simply can't recommend this race enough. It was worth the drive up from Galway and we got a super medal and t-shirt to boot! Next up for me is the Galway 5K series which starts this coming Tuesday. I might try squeeze in another Half between now and the Waterford Marathon but I think my weekends will be spent doing long training runs (unless anyone has any ideas for me!)

Side Note: I'm kind of over spending big bucks on race entry (unless its something special) so when you compare events like this to other larger events such as the Great Limerick Run (which is twice the entry price) - it really makes sense to turn-up, run and support such wonderful great local races when at the end of the day - a run is a run! You get out of it what you put in and as long as you are happy when you reach the finish line, regardless of your finish time, then you know you've had a great run! 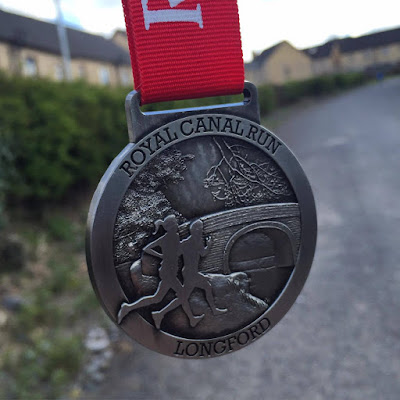