on June 26, 2016
I headed across the country to Waterford early enough Friday to ensure we'd get there in plenty of time. After a lunch stop in Lismore, we made it to Waterford around 4pm where I stopped off to pick up my race pack in WIT and what a pack it was... Two t-shirts, crisps, water, multivitamins, flapjacks and a bag. I love a quality goodie bag and this one definitely didn't disappoint. I was parked and in the hotel before 5pm where I had the evening to relax before Saturday's 9am start. 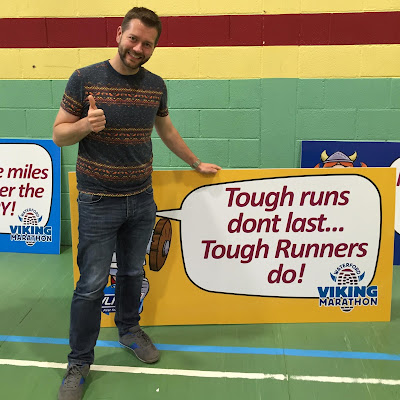 The Registration Hall in WIT

I woke at 6:30am and followed by (now typical) pre-marathon ritual. Had coffee and breakfast in the hotel room and showered, which may seem pointless but I like to be fresh at the start-line. We left the hotel about 8:40am and walked to The Mall, where the start line and hundreds of runners were already gathered. There were 2000+ runners across all three events (Full, Half and Quarter) each identifiable by their bib colour. Full in red, Half in Blue, Quarter in Yellow. 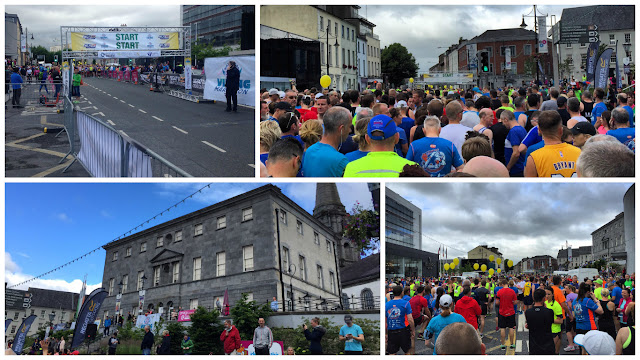 The race started bang on 9am as the WLR radio were reporting live from the start line where the countdown started bang on the 9 o'clock news. The first two miles were in and around the city, turning up side streets and back on the quays before doubling back and heading around People's Park and back into the city centre for the next mile or two. The route was dotted with great bands who kept the spirits up as we followed the red, blue and yellow arrows around the city. 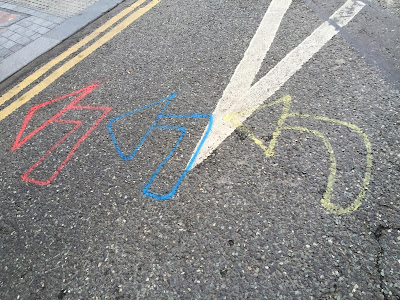 Red for Full, Blue for Half, Yellow for Quarter

Out around the 5 mile mark, a guy beside me started chatting to me and honestly this was a godsend. We hung together until around mile 11 just talking about work and running etc. He was a far better runner than I was (his PB is around 3:15, mine was 3:51 from back in 2014) but we maintained conversation as I was slightly wary of the pace I was maintaining over this distance. I was clocking around 5:15/km which I knew was way too fast but decided against my better judgement to ignore and plow on. 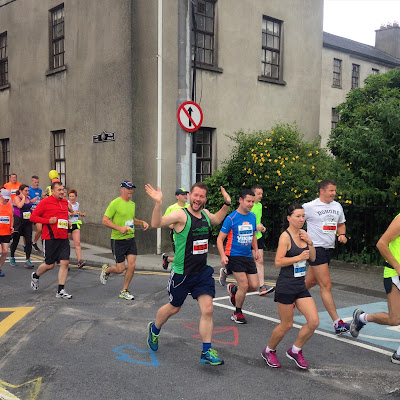 The road to Tramore was just perfect. The weather conditions were spot on as we made our way off the main road and up a side road and passed over the half way mark at 1:51. At this point, I was still ahead of the 3:45 marathon pacers (but only just) which I couldn't believe. At 23km, we turned left and ran straight down to the beach in Tramore where the course got a little confusing as we made our way along the promenade with other runners coming towards us who had already completed the loop of Tramore.

It was here, around 27km the 3:45 pacer and group of about 6 runners with him passed me. I decided I'd keep them in my sights as we made our way back on to the promenade and back on to the main road back into Waterford. Here we hit the 20 Mile marker and I couldn't believe how well I felt, my watch read 2:50 - it was at this point I realised 'Bloody Hell... I could PB this!" - I had one hour to cover the 10k that stood between the 20 mile marker and the finish line and I just ran, one foot in front of the other as I made my way back into Waterford.

The marathon field was quite small (I overheard someone say it was around 400 runners), which meant once the Half's left us at Mile 10, runners were quite spaced out but not as much as other marathons I've run like Tralee where I remember only one other guy in front of me for most of it. I overtook a few people on the way back to the city but had lost sight of the 3:45 pacer.

At Mile 23, we re-joined the route the Half Marathoners originally split from us and it was quite desolate as I made my way up along the River Walk. People had started walking (which is always really hard to motivate yourself through) and I ran with one guy who had to stop because his calves started seizing. We turned into Waterford Nature Park at Mile 24 (just 3km to go) and I saw one guy buckled over vomiting. The end of a marathon is an absolute beast of a thing, you are running on empty, really digging deep. My pace had slowed (by about 15/20 seconds to 5:35/km) as I ran around the park pretty much solo.

I hit 41km with 3:40 on my watch and I knew I was going to PB. It actually lifted me so much, I returned to form and clocked up a 5:15 kilometre as I made my way into the Waterford RSC and onto the race track there where we had to do a lap of the track and across the finish line. I did it - I ran a personal best wherever the hell I pulled that one out of! Even my watch congratulated me... 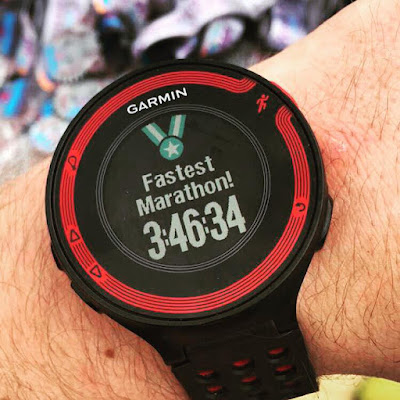 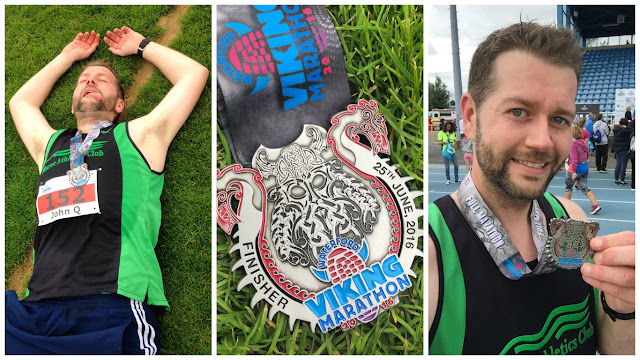 Waterford was an absolute gem of a course and one I'd recommend to anyone. Not because of how well it worked out for me but the support around the course and the sheer volume of water/gel/energy drink stands was incredible. With water every 2 miles (and in bottles not plastic cups), and so many supporters out with tubs of jellies/orange slices, no runner can say they were left needing anything out there. There were plenty of porto-loos dotted along the course and loads of volunteers guiding the way, I honestly cannot fault the efforts that went into organising (and delivering) what was quite simply, a fantastic marathon. 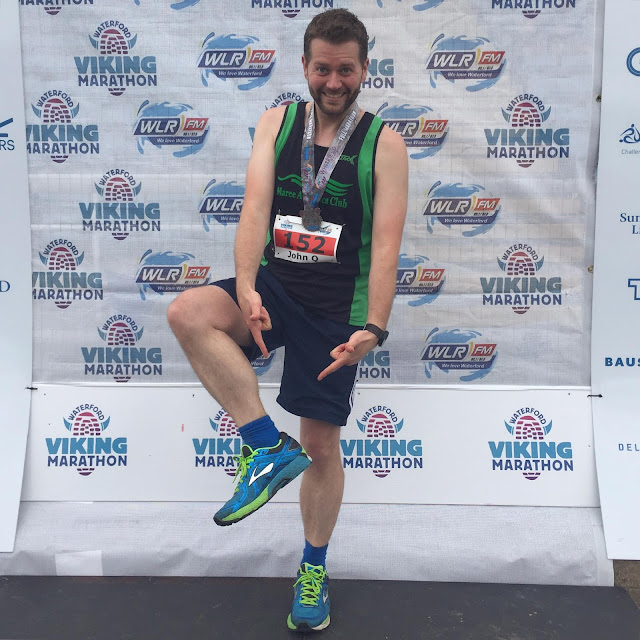 Also, I forgot to pack running socks and only realised after 9pm on Friday night so I had to run in regular socks (which I borrowed from my husband). He reckons they were the secret to my success so a special shout out to my big blue socks!