on July 29, 2016
Without much thought, myself and Aisling signed up for the Killarney High Peaks Challenge a week before the event itself (July 9th). The 25km route sees participants trek up Gap of Dunloe and across the MacGillycuddy Reeks, with Carrauntoohil (Irelands highest mountain) being the last peak before finishing. Myself and Aisling collectively had very little mountain/orienteering experience but figured we'd be fine as this organised event would be signposted and have many walkers following the same route. We hadn't considered the most important thing though, the mountains themselves!

We headed for Killarney on Friday evening, arriving in Cronin's Yard just before 7pm where we pitched our tent for the night before heading back to Killarney for a bite to eat and to pick up some last minute essentials. We were booked in on the 5am bus to Kate Kearney's Cottage (the start line) so went to bed early enough with our alarm set for 4am. Between the rain and the campsite, I think I slept on and off but not too great. It lashed rain as we got ready for the day ahead. 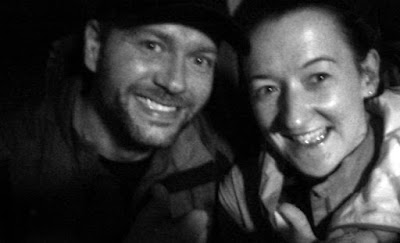 Myself & Aisling - Ready for the High Peaks...

We boarded the bus at 4:45 which made its way to the start point where the first few participants started on the journey up the side of the Gap of Dunloe. I was excited and looking forward to seeing parts of Ireland I'd never seen before, especially from such a vantage point but as daylight slowly pushed the darkness away, our vision was limited by the rain which made for a disappointing ascent. 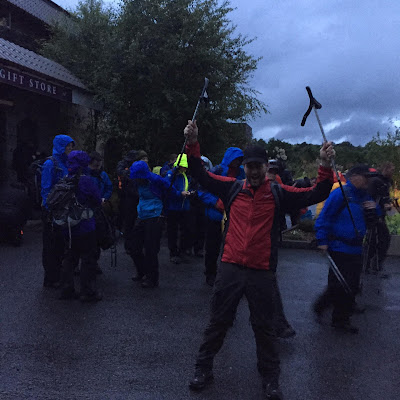 The rain never let up and the higher we climbed, the more challenging the conditions became. We reached the first peak (Tomies) about 1hr 30 into the trek, just under 4km of ground covered. The wind was so strong you couldn't stand at the top so we took shelter behind a stone wall. There we met a woman who's pink jacket I had been following the entire way. I couldn't believe how disorienting the whole thing was. The woman told me she had done this the previous year so knew the route. When she headed off, we decided it best to follow her so we caught up with her and followed behind her like some weird stalkers. 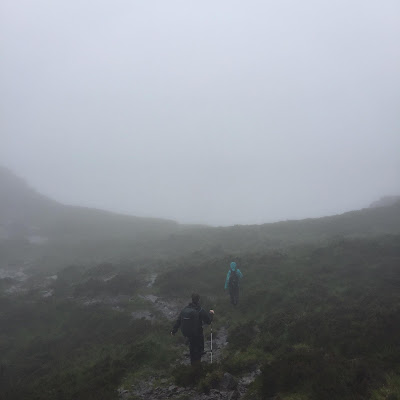 Visibility was poor once we got up the mountain

We reached the first check point on Purple Mountain by 7:30am but things were starting to look grim. We'd been two and a half hours trudging through mud, ferns, fields and swamp. My feet were wet, my map was in bits and because we were following the woman in pink, we couldn't take it at our leisure. In my head we were going to have a lovely relaxing 25km trek over the mountains but this was becoming a challenge.

As we made our way down the Gap of Dunloe, we spoke to the guy at the next checkpoint who said there were only 7 other hikers ahead of us which meant there were still 190 people behind us. Most of the signage and red tape had blown away in the wind so we were pretty much banking on the lady in pink to be our walking map/compass. She ploughed on off up the Reeks towards Peak #3 and we followed suit. 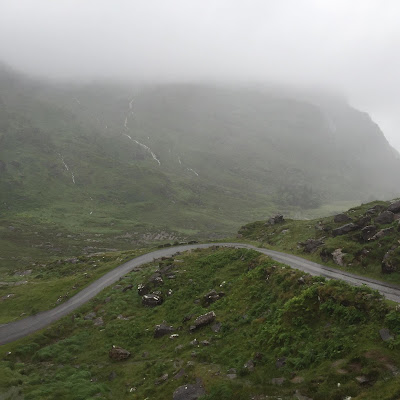 Looking down at the Gap

At the top of the third peak 4hr 30 into the trek where we had a chat with the woman in pink we were following. She felt the challenge would be called off as the previous year, once they got to Carrauntoohil participants were sent down for their own safety. According to her, this years weather was much worse so we were going to have to see what the marshals at the check points were going to say. At the top of the fourth peak (and over five hours trekking), myself and Aisling decided to call it a day. 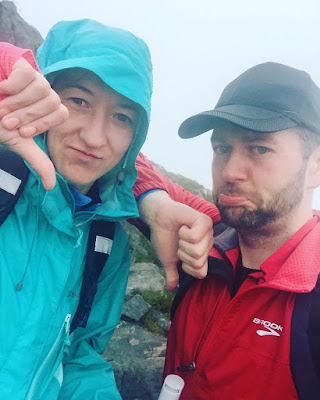 We had no map, we were soaked to the bone, we may as well have been walking around a field at home for all the view we had (i.e. none) and in our opinion, it would have stupid and dangerous for us to continue considering we didn't have the experience or skill to navigate a mountain in the conditions. The marshal at the check point showed us the safest way off the mountain and we made the hour long bog walk through a muddy field back down to the main road. 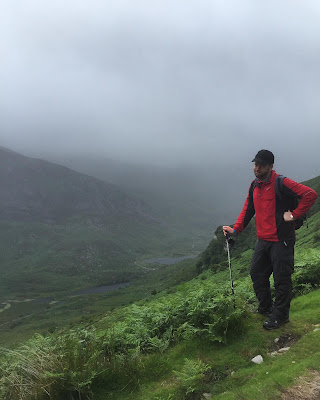 6 hours after we started, we made our way back to the road and Kate Kearney's Cottage where, to be honest, the thoughts of hot coffee and some chocolate kept us going. It was disappointing to have to call it a day but in hindsight it really was the right thing to do. We met the lady in Pink afterwards who had gone on to the 5th peak before turning around and calling it a day so I'm calling our decision a success.

We stopped into Kate Kearney's Cottage where we had a beautiful cup of steaming hot coffee which was enjoyed as we sat in our damp clothes on the bus back to Cronins Yard. We clocked up 16km walking in just over 6 hours, we got to the top of 4 of the 12 peaks and we even finished with a medal (which felt a bit bittersweet but I still took it all the same). 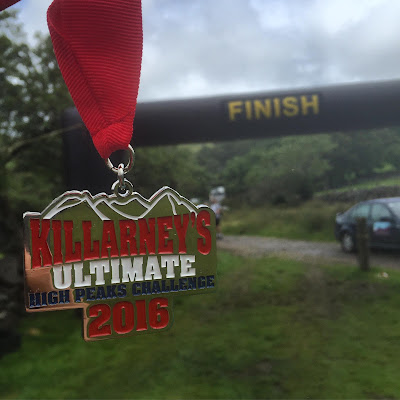 I'd really love to have completely the challenge but the conditions just weren't in our favour. I'll definitely return to Cronin's Yard again to complete Carrauntoohil as its something I've really wanted to do for a while but for now, it'll just have to remain on my Bucket List! We fought the mountain but this time, the mountain won... Next time, I'll be prepared!