The 2016 Rock n Roll Half Marathon

on August 08, 2016
Without really realising it, the Rock n Roll Half Marathon has become a bit of a staple in my life. I really really enjoy it and look forward to it. This is a great race, starting up near the 3arena on the Quays, bringing along the Quays alongside the Liffey, around Christchurch and into Phoenix Park. This year the event changed to weekend (the one after the August Bank Holiday) and now has a 10km rolled in to the main event. I've taken part the past three years and finished in 1:51, 1:50 and 1:49 respectively. My goal was simple, finish in 1:48. Myself and Al before the race

Myself and Alan turned up at the start line just before 8am where the crowds were gathering and following a bag drop-off, I met with the other Rock Idols for one final photo. Myself and Al parted ways five minutes before kick-off as we made our way into our respective corrals. I don't know what 'Target Time' I had given myself but from Corral #3 I could already tell I was out of my depth as the 1:45 pacers were way behind me. 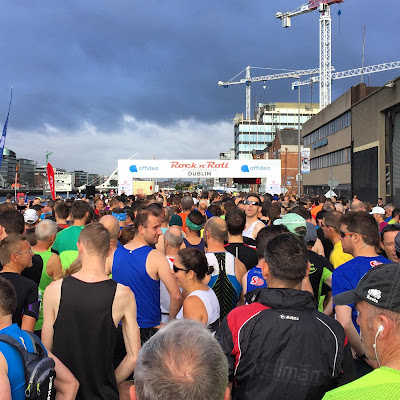 The race started shortly after 8:30am and I found myself running slightly faster than I had intended but the energy of the crowd carried me the first few kilometers to the water stop at Christchurch. It wasn't until I turned into Phoenix Park (around 13km) that I really started to feel the strain of keeping it under 5:00/km. The sun had come out yet there was a strong wind blowing down Chesterfield Avenue which lead some strangely enjoyable relief at that point.

We followed the same path as last year but that still didn't help when it came to the hill around 17km in. All I kept thinking as I made my way to the Finish Line was 'How the hell am I going to do double this in just twelve weeks time?' as the Dublin Marathon looms just over the horizon like a grey cloud. I pushed through for the last few kilometers and have to say, passing the 10K'ers who had just finished was a great boost. 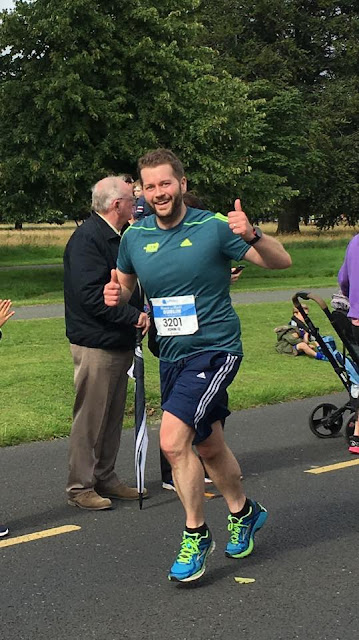 As I rounded the corner towards the finish line, I saw my friend Elaine (who took the snap above) which was just enough to push me over the finish line with a burst giving me a finish time of... 1:48:54. That was my 15th Half Marathon in the bag and they really don't get any easier. That being said, I still love them and think a Half is one of my fav distances to cover. 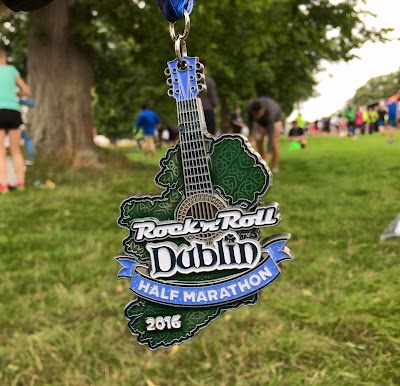 Alan finished shortly after me (with his fastest half at 1:51) and as we lay on the grass covered in Nature Valley Bars and bottles of water. Another nice perk was the Trinity medal (below) which was given to runners who had completed three of the previous Rock n Roll's in Ireland. With heavy bling around our necks, both myself and Alan left Phoenix Park happy out with the mornings effort. The next time I run in Phoenix Park will be the marathon in twelve weeks time, better get training! 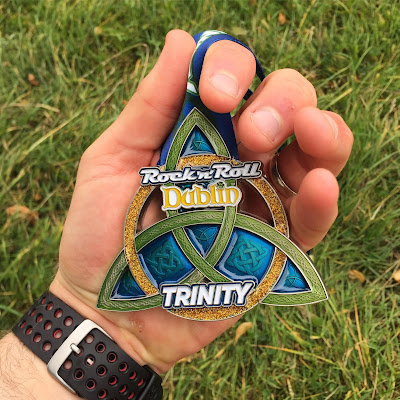