on September 06, 2014
I had signed up for Run or Dye on the day registration opened (back in May) and had kind of pushed it to the back of my mind. It was only last week when someone mentioned it that I remembered we had all signed up. So this morning, at 8:30am, myself Gordon Yvonne and Aisling all dressed in our Persil Whites headed for Lough Cutra in Gort to get our colour on! 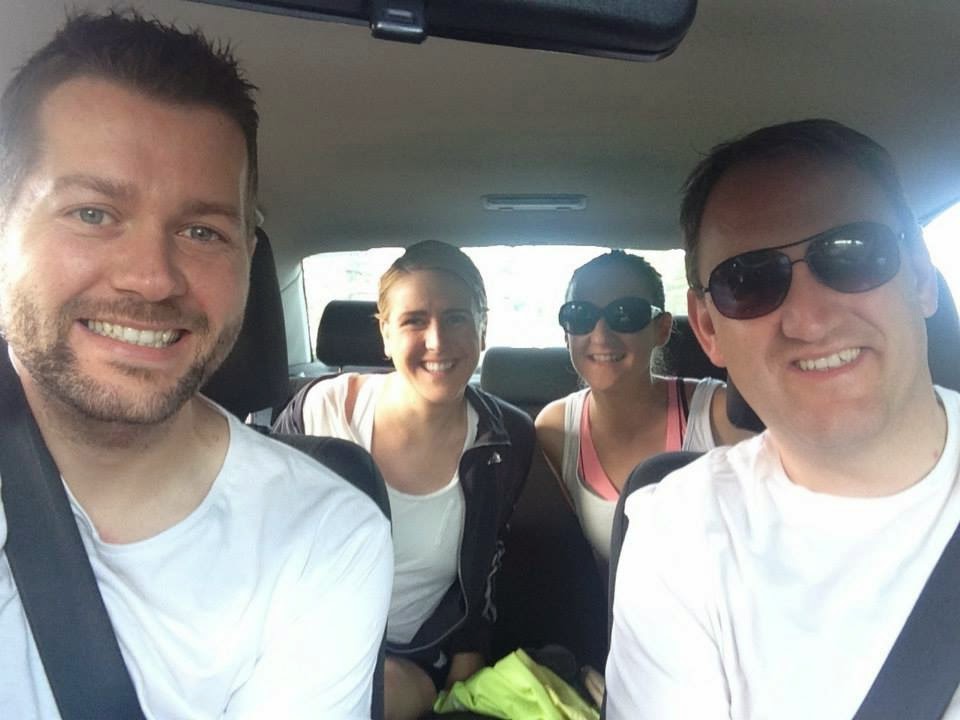 The run itself cost €35 which is expensive considering we had to pay another €5 to park in the field and we got boxed in as they let cars park in front and behind us. We picked up our registration packs no bother, and met with Brad & his friend Wioleta and Michelle and her son Rian. In our registration packs we were each supplied with a different pack of paint which lead to a fun pre-run scatter of reds, yellows and blues. 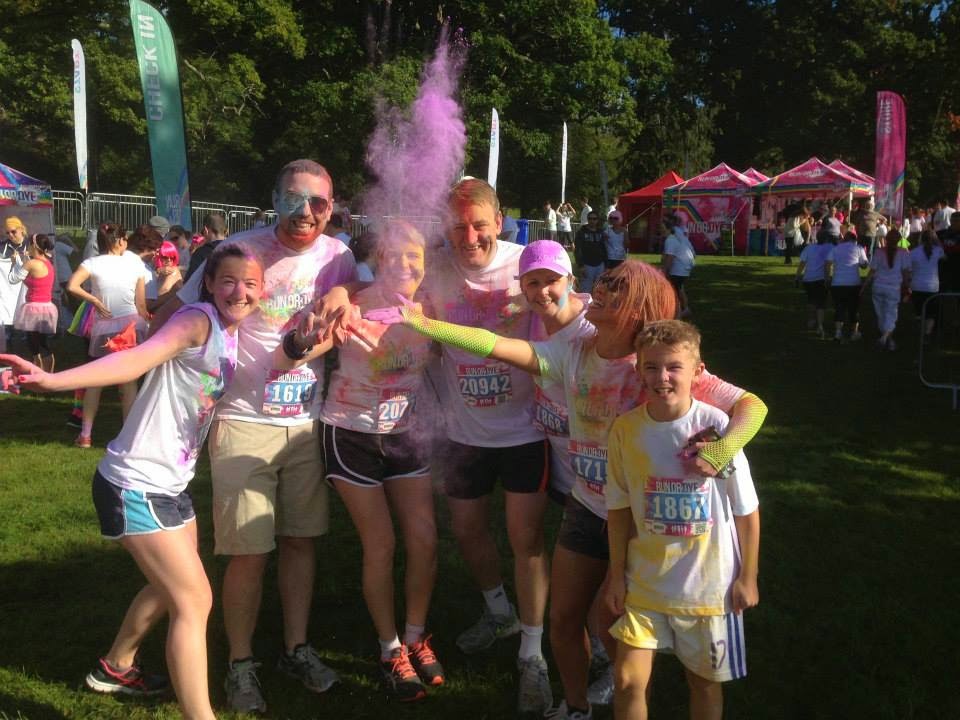 The 5K is a fun-run, so with no chip times and paint gauntlets at every kilometre along the route, we were all ready to have a morning of fun! The sun was out and we were on the beautiful grounds of Lough Cutra in Gort rearing to go! We were let off in waves shortly after 10am and it was quite possibly the most fun I've ever had on a run in my life! 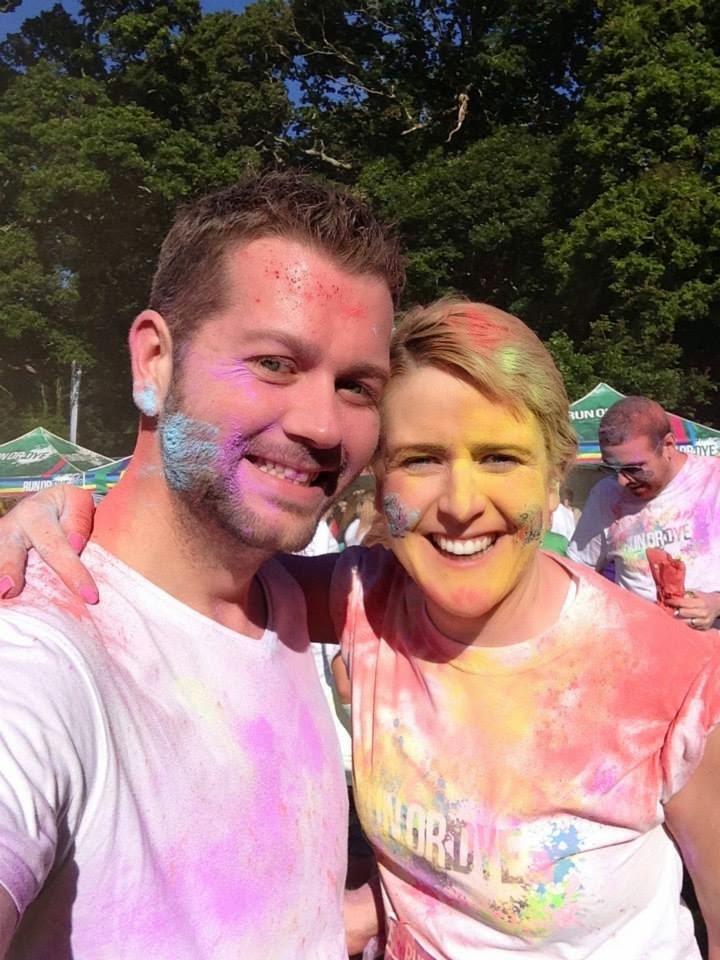 Myself & Yvonne (looking a bit Yellow!)

We all ran close to each other so the first 2K was spent having the banter with Aisling, Gordon & Brad. The route was entirely off-road which I don't think anyone was expecting but definitely posed its own challenges of avoiding cow pats, uneven ground and stones. That being said, it also gave ample time to take epic running selfies :) 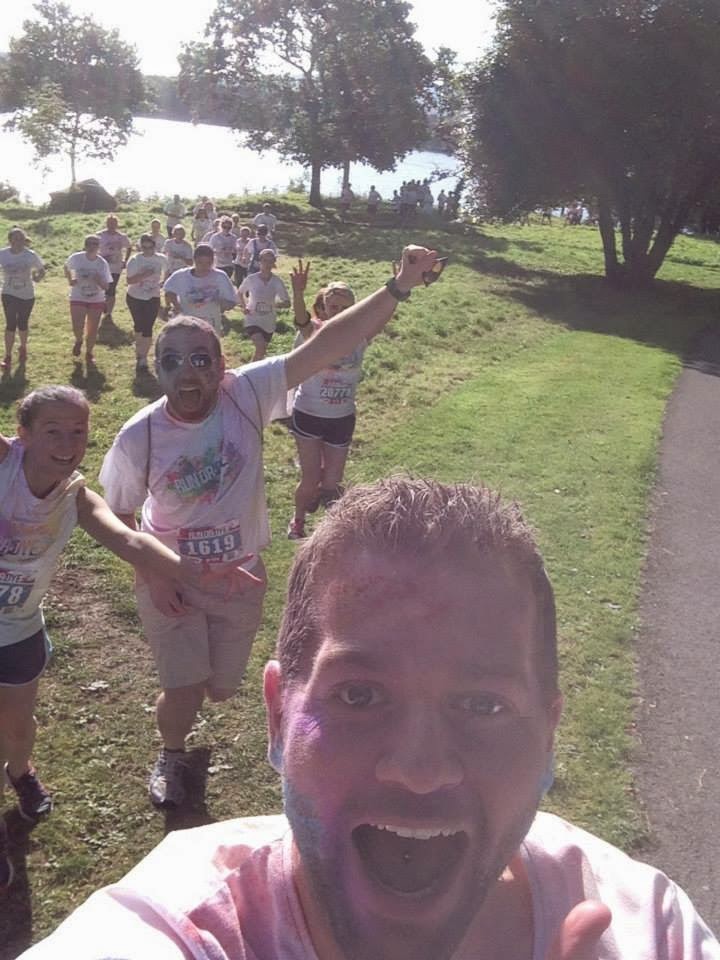 Just before the 1K mark

We passed through four different colour gauntlets where you ended up running into a cloud of whatever colour they were dishing out. It was absolutely hilarious to wait on the far side of the cloud and watch your friends come through plastered in paint! I've never laughed as much. There wasn't a single person who escaped unharmed. One for a lob of paint in the eye while another got a clogged eardrum. 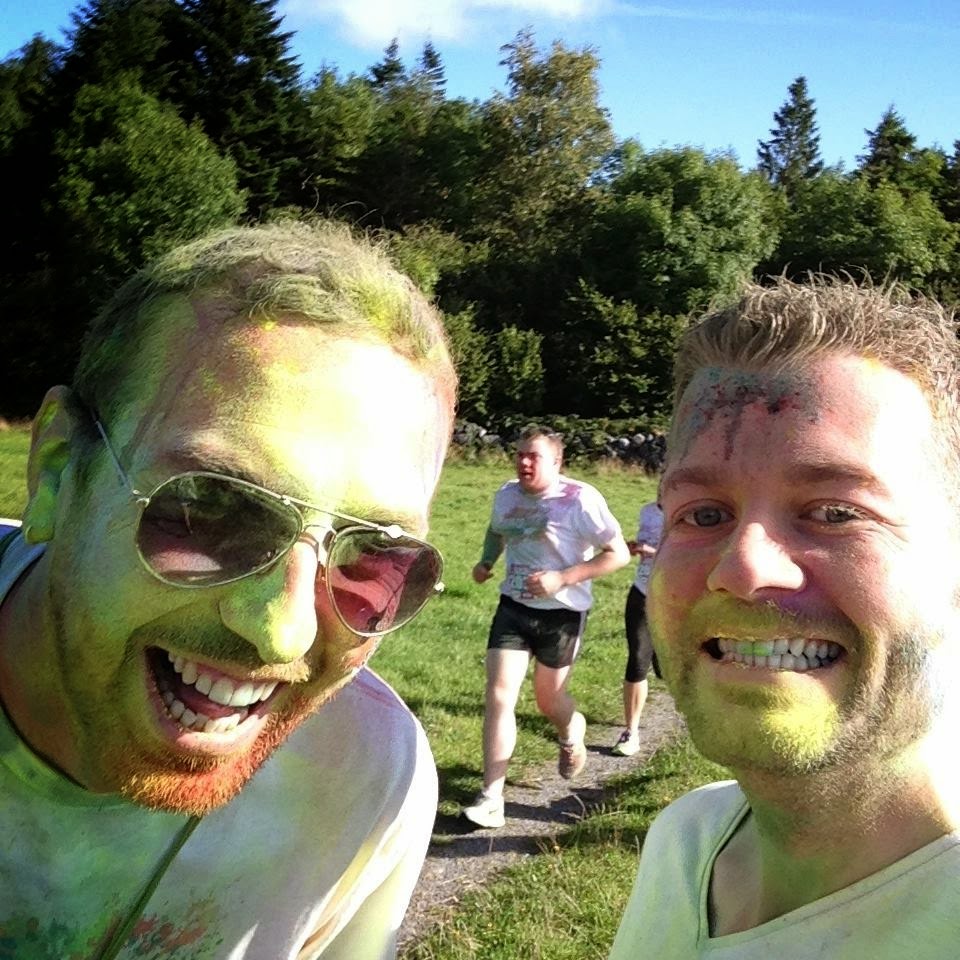 Myself and Brad just passed the Yellow Station

The route ran the grounds of Lough Cutra, a place I'd never been before. It was absolutely gorgeous! I don't think the place is open to the public often, unless under hire, so it was lovely to see the castle, the lake and the grounds on our run. We ran, we chatted, we laughed, we took photos. 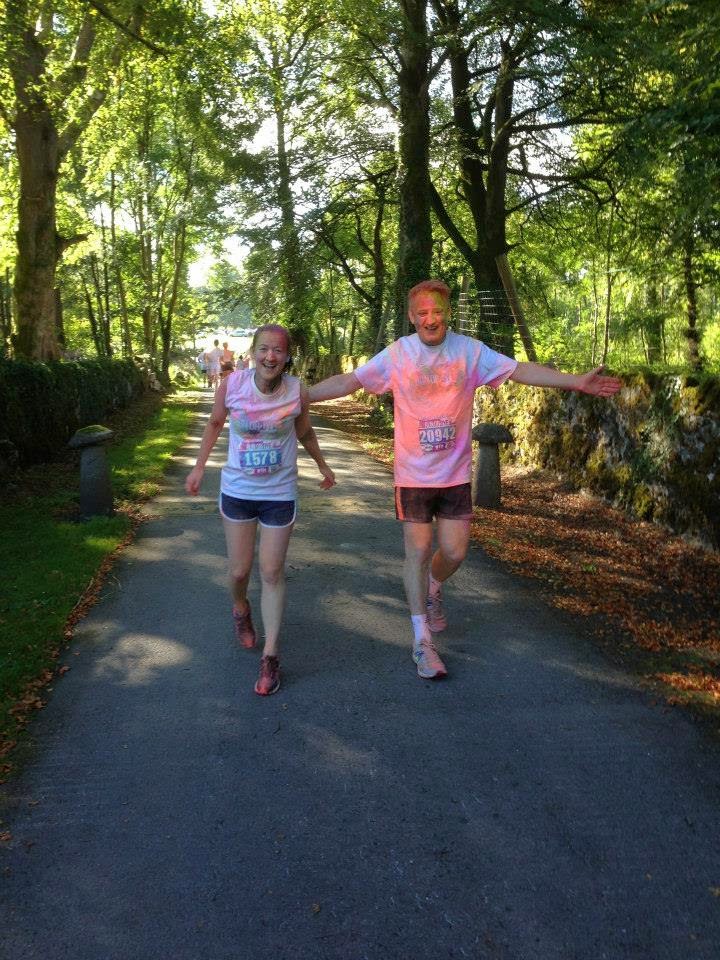 We hit the finish line at around 35 minutes which was extremely reflective of the more relaxed pace we had taken getting through the course. Myself, Gordon and Aisling crossed the finish in arms laughing - and thats exactly what we got out of the day. 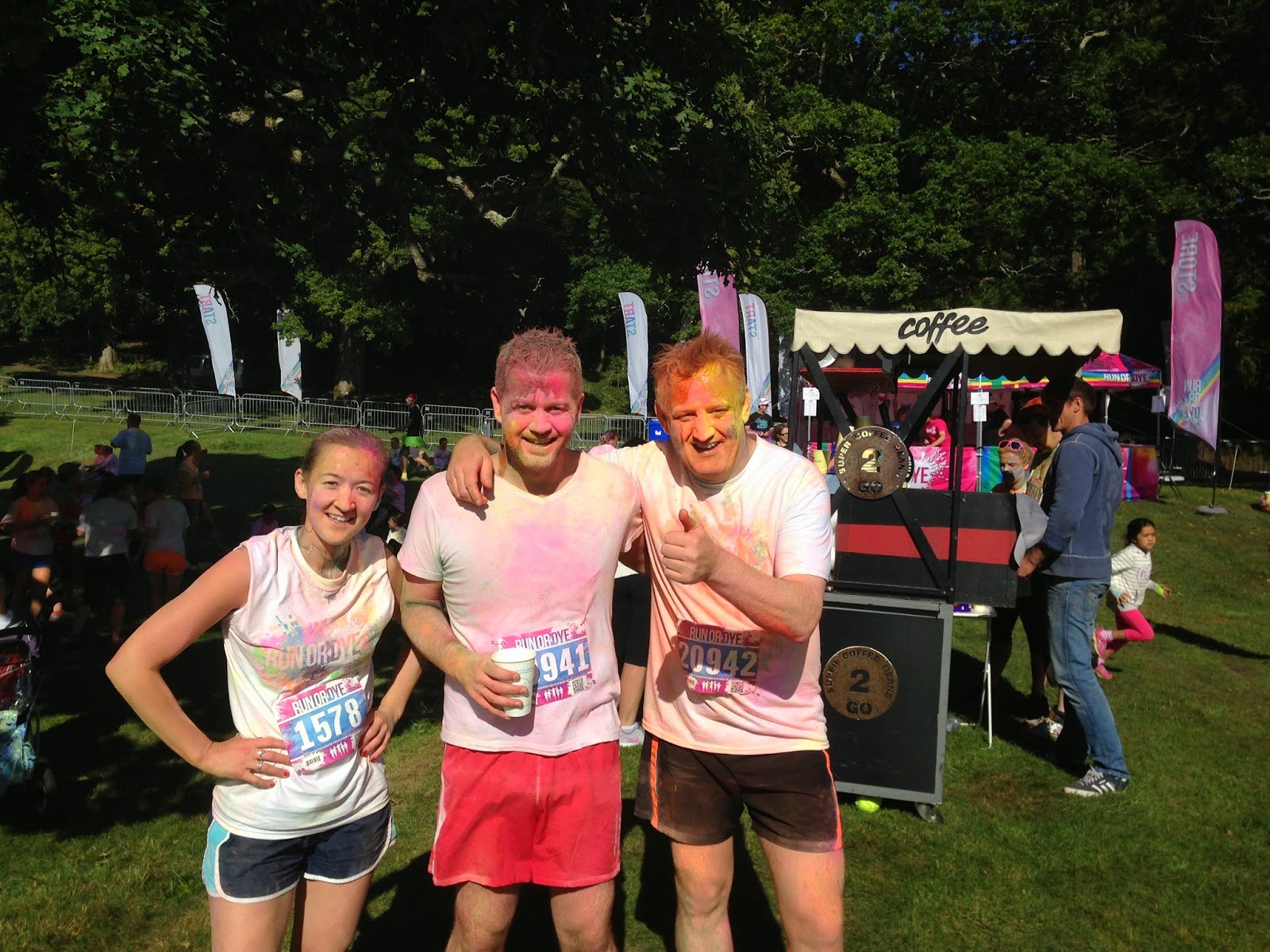 They always say you should finish any run on empty, to give it everything you've got... Well for a change, this run gave us everything it had got in store for us. It was great to run without thinking of time, at one point myself and Aisling were holding hands skipping along the course, at another point we were in stitches at fact Gordon looked like he had been shot in the side of the head. The pre race, mid race and post race banter was brilliant.

When Run or Dye comes back, I'll sign up! 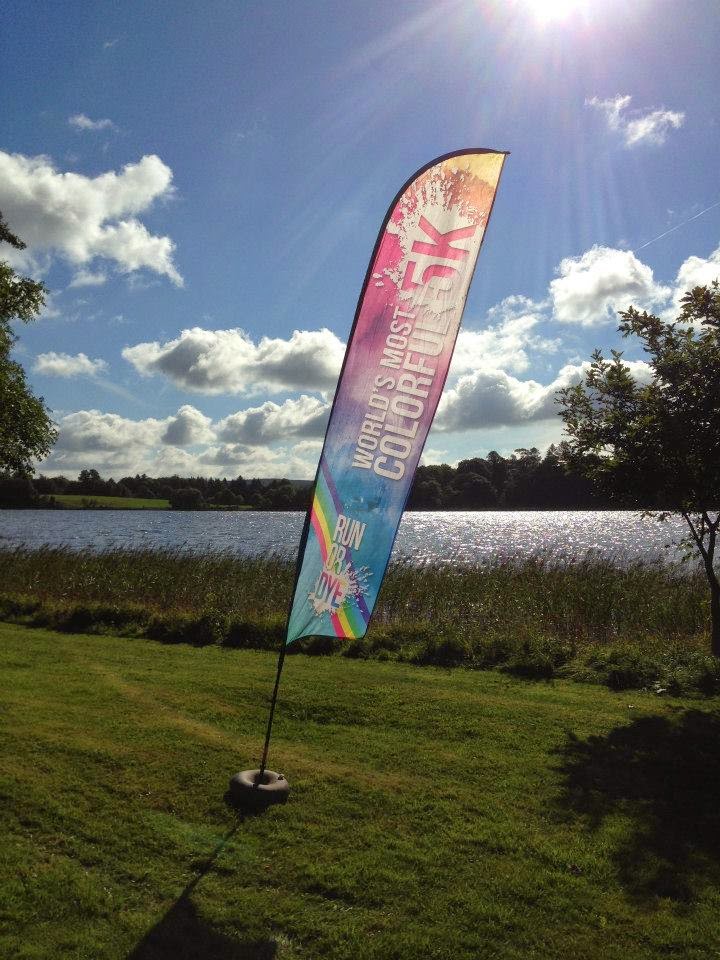