Are we out of the woods yet?

on November 14, 2014
Trail running has never been something that has interested me. If I'm going for a run, I'm going for a run - that's it! So I was surprised last week when I saw that Sean from Amphibian King was starting up a Trail Run group on Tuesdays in Kilcornan (Clarinbridge). Described as an introduction to trails, I was keen to get tucked in. No more than with the cycling or the heart rate training, I'm always open to trying something new. Who knows where it'll lead or what opportunities/experiences will unfold.

After work on Tuesday, I went to Weight Watchers, home (grabbed a quick bite to eat) and was back in the car heading for Clarinbridge at 7:45pm. There was something spooky in the air as a heavy fog which had descended on County Galway disappeared upon entering the woods.

Following a quick introduction from Sean, myself and Alex headed off following Sean into the woods. In what I can only describe as a mixture between Temple Run and Tomb Raider, we ran, jumped, tripped, slid and navigated our way around the woods. Without any street light, it was completely different having to run only focusing on the spotlight in front of you. 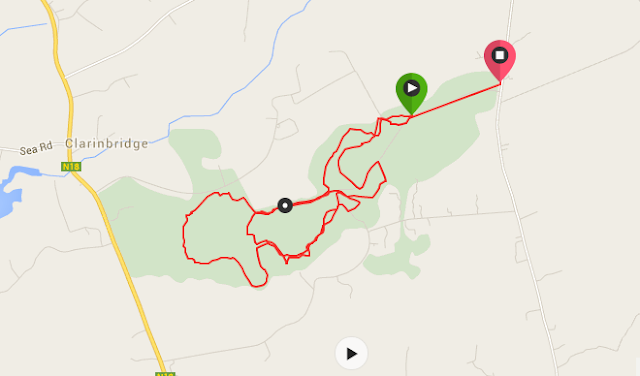 
We covered 7.5km, each taking turns are leading the pack. It was so different to any other night run I've done before (as usually they are under streets lights) but because you were constantly on the look out for obstacles. Overhead branches, puddles, rocks, tree stumps. It really was quite a lot of fun! We ran for an hour with short stops for either guidance and tips from Sean or pointing out some of the local features like the stone alter which is pretty much hidden in plain sight.

I used the run as my recovery run as my heart rate never went into the threshold zone. What was interesting was how 'sore' my legs were the following day. Running on softer ground constantly changing direction clearly used different leg muscles. I really enjoyed the first night of running through the woods. I don't know if its something you'd do solo but I'll definitely be back next week for more.