on April 04, 2015
The Marriage Equality Referendum is fast approaching (May 22nd) and every day closer we get to it, I'm getting slightly more anxious about the outcome. The thing about this referendum is how personal it is to thousands of people living in Ireland right now. While each amendment to the constitution has affected "the people" of Ireland, this one 100% impacts me, many of my close friends, hundreds of thousands of people I don't even know and countless others who will grow up in this country and want to marry the person they fall in love with regardless of their gender. 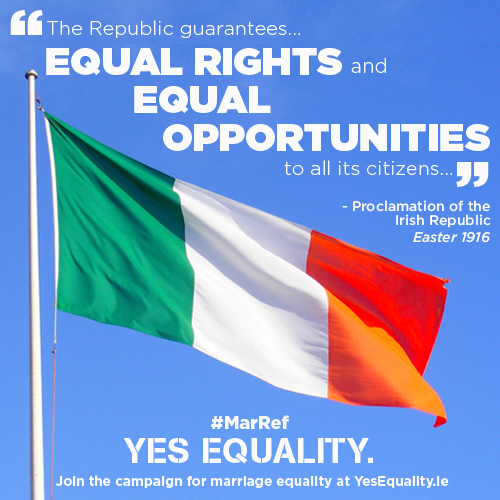 The message the YesEquality campaign has been promoting so far has been: Vote and Vote Yes. Seems pretty simple - however for a referendum to pass - 50% of the turnout + 1 vote is all that is needed. This sounds achievable in theory however time and time again I find myself worrying about how possible this actually is.

I was driving home from work on Thursday when I heard Matt Cooper (Today FM) talking about the Dunnes strike. The spokesperson for their union said something along the lines of "everyone know why we are striking - we have been publicising heavily in the media over the past few weeks" yet here I was only hearing about it on the day. My point is, you also cant assume other people will know

1. That a referendum is happening.
2. Why it is happening?
3. Why their vote is important?

It is happening on Friday May 22nd.
It is happening because gay and lesbian people cannot get married by law in this country. We can have a civil partnership which is not the same as marriage which is currently only possible between a man and a woman, not a two men or two women. Not the same means not equal. Not equal = inequality.

The constitutional amendment for marriage equality, if passed, will mean that lesbian and gay couples will be able to marry. This will not impact on any existing marriage or on any future marriage between a man and a woman. Allowing lesbian and gay people get married just like everyone else will take from no one and will have no effect on anyone else’s marriage.

It can be taken as a guarantee that anyone against it (the Vote No side) will definitely turn up on the day and vote - it's getting the Vote Yes side to turn up. Now, I'm thinking pretty much all of my Facebook friends will vote yes and you might be thinking the same - but how many of them can and will turn up on the day. While I don't doubt my friends will want a yes vote to go through - Things happen - life gets in the day. I'm as guilty as the next person when things don't directly impact on me that sometimes things slip my mind. 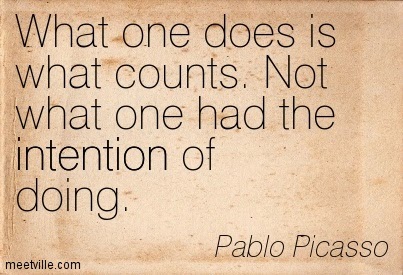 So I'm asking each of you to please please double check the register. Make sure you are registered and able to vote. And make a promise to the LGBT in your life that you will turn up on May 22nd and vote. If this referendum is lost it will be because more people turned up on the day and voted no- it will break my heart!

So please - regardless of whether you are gay, straight or however you identify, whether you believe in marriage or not, this referendum is simply about equality.

Go to www.checktheregister.ie and make sure you are registered to vote. While you are there, make sure everyone else in your house is registered - don't just assume they are! (I just found out both my brother-in-law and sister-in-law aren't registered as they were taken off the register when they left home for college). Don't worry if you aren't registered you can still get included on the Register if you take action before May 8th. 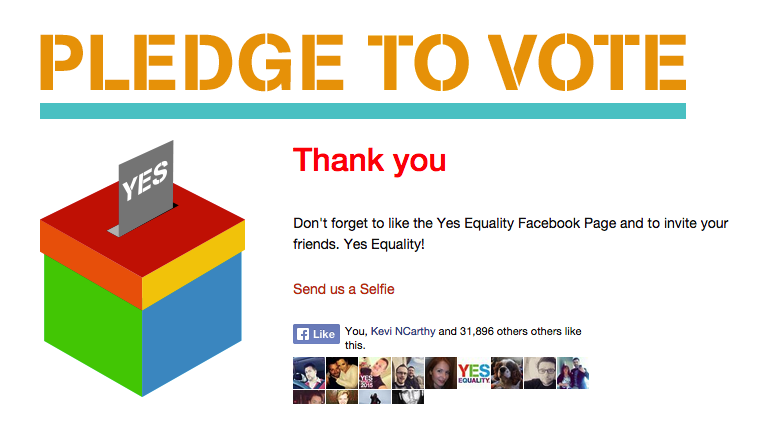 I believe in a fair and equal Ireland and I hope you can take 5 minutes this weekend to double check the register and make your pledge to vote next month. If you stand up for equality you can and will make a difference in Ireland and for the generations to come.