The Great Limerick Run - Half Marathon #10

on May 04, 2015
I was excited for this years Great Limerick Run for a number of reasons - The course is my fastest Half (last year in 1:40), I was running it this year in my YesEquality t-shirt, I haven't run a Half since Waterford in December but mainly because it meant doing only 13 miles as my long run this weekend instead of the planned 19! 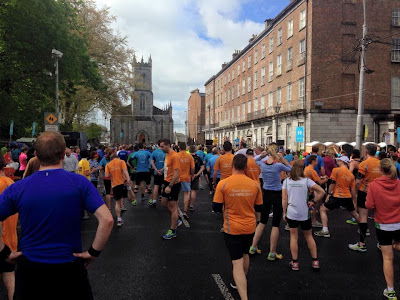 Mam dropped me off near the start line area on Sunday morning just as the rain stopped pouring over Limerick city (Thanks for the lift Mam!). I made my way into the runners starting area where there was Zumba going full force. There I met with Noel & Rob (the lovely guys also in the Yes Equality t-shirts in the pic below). I also met with Jason who I met at the starting area of the Dublin Marathon in 2013 along with Dermot from the Dublin Frontrunners. 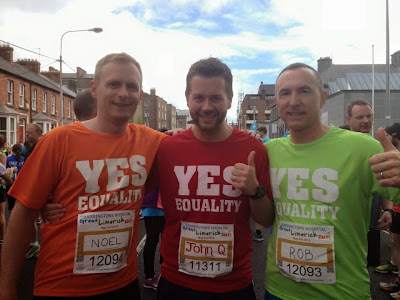 Noel, Myself and Rob pre-starting whistle

The run started bang on 11:45 and I kind of didn't really have much time to think about anything. I remembered the route from last year but in my head it was a lot flatter than I remember. I took off way too fast and I knew it, but what did I do... Kept on going. I clocked the first few km's in 4:30/km which I knew was too fast to sustain but I kept on going powered by the fizzy pop music blaring in my ears.

I hit the 10K mark (around The Crescent) at 48 minutes and things started to get tougher from there. The day was humid and clammy. It really needed to rain but the clouds were holding out on us. It was a lovely treat to hit the city centre again around the 12km mark as the buzz and energy from the crowd (mainly the 6 milers waiting to start) was brilliant. I clocked up another 4:30/km there but I really felt it from there.

As I crossed Sarsfield's Bridge (13km) I could see the 3:45 Marathon pacer cross past me and I could feel how close they were to their finish line. I remember in Connemara how hard it was to keep running past the end of the Half Marathoners but here was the complete opposite - for the next few miles all the slower marathoners were being overtaken by the Half and then the 10K'ers. That must really such but fair bloody play to them for trudging on - every time I passed a Blue Bib I gave them the supportive 'Good on ya' nod.

The last few kilometres were tough and I was really starting to slow down/stiffen up - punishment for going out way too fast. My last few were around the 5:15/km-5:20/km mark and I was hoping I'd done enough to hit 1:45 and the earlier few km's would compensate. As I crossed the 20km mark and we turned back onto O'Callaghan strand (parallel to the river), I took off again, crossing the bridge and onto O'Connell Street crossing the line at 1:45. I couldn't believe it - delighted with myself! Half Marathon #10 in the bag... 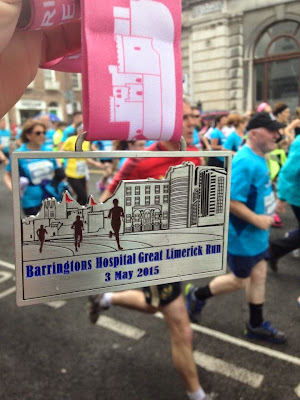 Boom! Another medal for the collection!

I really loved the support on the route during the run. I don't know if it was the bank holiday weekend or the River fest in the city but I do feel like wearing the YesEquality t-shirt definitely brought out some extra support - I got a load of 'Vote YES' or 'Gwan John Q' when people saw the message on the t-shirt - and what a better way to get that message across to so many people who were watching from the sidelines waiting to support the special person in their life. 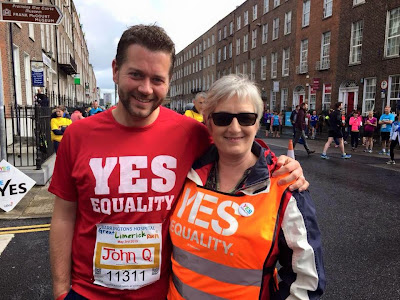 Myself and a YesEquality street canvasser
(Thanks for the pic Cillian!)

As I left Limerick, I caught the start of the 6 miler (10K) and saw quite a number of other YesEquality t-shirts in the field which was lovely to see. Looking on Twitter I see a number of people had written 'Vote Yes' or 'YesEquality' on their bibs, others painted their nails and wore the YesEquality badge while they ran. It was so fantastic to see - Limerick, you were awesome! Until next year :) 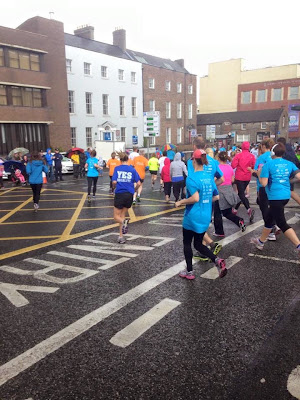