How do you know what you don't know?

on January 03, 2014
This isn't one of those motivational 'how to set goals' post, instead it's a simple question that I am struggling to come to answer myself: How do you know what you don't know?

To frame this another way: I know the things I know, and while I may not be an expert at these things, these are still things I know. For example: Computers. I am a computer programmer and I have a very good working knowledge of computers. I work on a computer all day and am always tinkering and trying new things out. While I wouldn't call myself a hardware expert (which is a specific knowledge subset of computers) I still know about them and know how to research/increase my knowledge around this area when applicable.

The things I know can be summed up as follows: 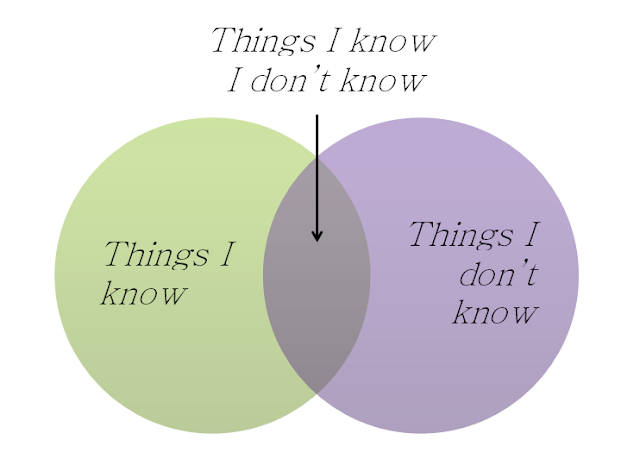 These were all things I now know but 12 months ago didn't even know they existed. These were discovered through exploring that overlapping circle bit - the things I know I don't know. I do feel extremely lucky to have hit something I love in finding running. I have tried other things in the past 12 months, for example I went to a Yoga workshop a few months back. I had never done Yoga and wanted to try it, and while I enjoyed it, I don't have the time right now to pursue it - and that's OK. That's my decision right now and while I may revisit it again in the future, at least I know I tried it. 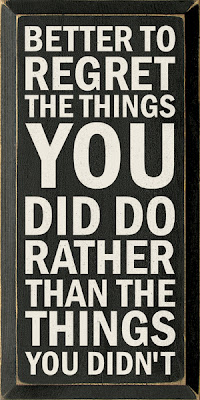 A few people have already asked me what my New Years Resolutions/Goals are for 2014 and if I'm honest with you, I don't have any general goals. I don't really want to set any broad year-long goals as I know I work better setting short/medium term goals in a specific area that I can work towards while getting continuous feedback.

What I mean by that is - Instead of signing up for a new 4 year undergraduate degree, sign up for a 12 week online course. Instead of signing a 12 month gym contract in January, sign up to a month-by-month Bootcamp. I always have these fantastic intentions that often never get realised as I get bored/change my mind. By taking small steps, you can decide if it's still for you and can ramp up or withdraw at little cost and quickly. If I sign up for a €50 monthly bootcamp and don't like it or find I'm not getting my money's worth, simple - don't sign up next month. If I've paid €600 for the gym (€50 monthly direct debit), and I stop going - that guilt will hang over me.

Last year I wanted a bike as I was going to start cycling as part of my fitness regime. Instead of rushing out to buy a new bike, I borrowed one from a friend (Thanks Michelle!). The bike sat in the shed for THREE months before I gave it back. I didn't go out on it once. And while this may comes back to the How do I know I wouldn't have excelled at cycling and loved it even more than I love running now?, there has to be some pay off. You can't follow every potential lead that comes your way - you have to decide which you want to pursue.

I am not going to make a list of non-specific New Years Goals such as the typical 'Do something new' or 'Be more creative', I am making myself the following goal: This month, try something new/different. This can be linked to something I already do e.g. Run an off-road race. This can also be something I have never done before e.g. Attend a Pottery Making class.

Just to contradict everything I've said before this, my Goal for 2014 is: NOT to have goals but to have experiences. To expose and make known to myself the things I don't know. It's impossible to know the things you don't know, but I can scratch the surface of many things I know I don't know about and see if these lead to me learning about things I don't know. My Goal for 2014 will not be to reach a goal because of the person it will make me once I reach it but rather to understand the person I am becoming.

For the first time in my life (I'm 31 years old), I like the person I am becoming. I'm proud of him. He is the type of person a Young Me would have hoped to be. This growth is something I could never have imagined this time last year. That's why if I had set myself a 2013 goal such as: 'Like Me More', it never would have happened as how do you make something like that happen? I can only speak from my own experience but I know how I made it happen... By exploring the things I didn't know.