on June 27, 2015
Guilt is a beast of an emotion to battle. Everyone battles with it in different arenas, under different circumstances and with different outcomes. Sometimes, you can collapse and give in. Other times you can fight through it. On Monday night I was at home raiding the presses for something to nibble on before bedtime. I found a bag of nachos so I tucked in. Half way through stuffing my face, my other half said to me: Are you being a brat?

I went to bed Monday night thinking "I'll go back to WW next week as I'm going away this weekend and want to eat whatever I want" but woke Tuesday morning with the thought "If I leave it another week, I'll do even more damage which I'll have to reverse the following week" and with that, I got up and went to class at 8am Tuesday morning on my way into work. 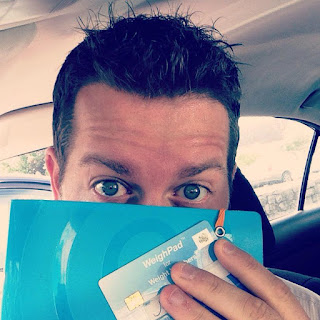 The damage - Up 8lbs - OUCH! It's confession time - My last weigh-in was the day after the Cork Marathon. That was three weeks ago and through one excuse after another, I'd been delaying my weigh in and suddenly three weeks had passed. I knew things weren't going to be pretty as my clothes were starting to feel that little bit more snug and I hadn't been for a run or to bootcamp since the start of the month. The ice creams on the way to the beach, the ice creams at the beach and the ice creams on the way home from the beach had taken their toll...

In the car on the way to work I started to like crap, like I was failing or something. I was expecting the increase yet when faced with it on the scale I was somewhat surprised by it. I knew I had two options - Continue on the guilt rollercoaster or jump on to a more positive train. I am a firm believer in the fact that there is an opportunity for personal development in every situation and here I am again staring at what I consider failure yet again.

I feel its important to point out that Failure is different for everyone, in the same way success is. Failure for me wasn't because I'd put on 8lbs, it was in the fact I'd let myself slip and derail for three weeks. Earlier this year I had set myself the goal of hitting 12st 7lbs for the start of June which at the time was a one lb loss each week for 16 weeks. I failed - I went on holidays weighing 13st 5. I then went on holidays and put on another 8lbs, bringing back to 13st 13lbs. That is a giant fail in my books.

I'm currently on holidays again (Hello Belgium!) and I'm surrounded by mouthwatering homemade chocolates, beautiful desserts and homemade waffles - it would have been so easy to just not go to weigh in last Tuesday and delay the inevitable but the thoughts of another week off track scare me more than the temporary delights I'd get from binging this weekend would. It's tough, it's always been tough but it's always been worth it. My next weigh-in is Wedneday, the day I come back from my this (second) holiday. I'm not looking for a loss just trying damage limitation at the moment.