on June 08, 2015
As Marathon #4 edged closer, something strange happened - I was actually really looking forward to it! I was feeling charged and ready come the June Bank Holiday weekend despite not getting in as many mid-week runs as required due to the amount of time I'd been spending canvassing in the weeks running up to the referendum or just busy with work and life. We (myself and my other half) decided to make an even longer weekend out of the already extended bank holiday weekend so booked into the River Lee Hotel in Cork Sunday and Monday night.

We arrived in Cork around lunch time Sunday and went straight to the registration hall where I collected my race bib and had a look around the expo before heading into Cork city to meet friends for coffee (and cake!) and do a spot of shopping. I also finally got to meet a long time Twitter friend Karen (@KarenCoakley1) in person as she was staying in our hotel too. We spend the night before in the bar drinking water and talking about everything from pre-race nerves to how we were planning to reward ourselves once the race was over. 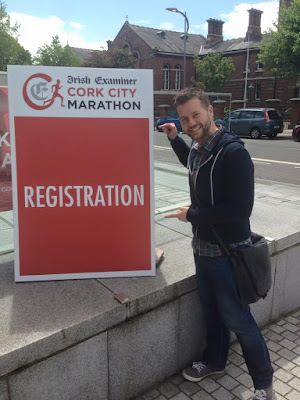 At the Expo in Cork City Hall

My alarm went off at 6:30am Monday morning and I made my way down to breakfast where the room was full of fresh faced eager looking runners all eating porridge. I had weetabix and a coffee (worst use of a hotel buffet breakfast ever!). At 8:30am I met Karen and along with her family, we headed into Patricks Street to the start line where we stood around chatting for a while. It was a great distraction to help ignore the pre-race jitters as they started to build within me. My goal for this marathon was simple: Finish it! I originally signed up for Cork as a bridge between Tralee (March) and Berlin (September). I figured Cork would keep me ticking over and it had already achieved its intended purpose so running it was the final step in the chain. 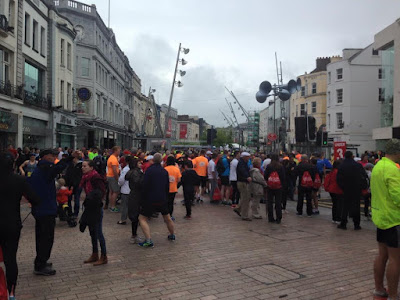 Ten minutes to kick off...

I kissed my husband goodbye before heading off into the starting pen - I lined up half way between the 3:45 and 4:00 pacers as my time goal was just to beat my Tralee time of 4:01. In my head (and over on boards.ie) I had set myself the target time of 3:55 so figured having the 4 hour guys behind me would be enough to keep me motivated. My plan was simple: Stay on pace - don't go out too fast - Keep to around 5:30/km. 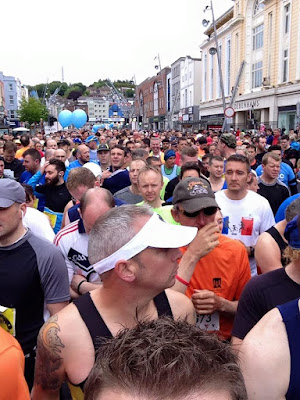 The race started bang on 9am and I took off around Cork at my planned pace. It started raining less than 2K in to the race which was expected but still made for a more of a challenging run. The route took us out along the quays before crossing over the bridge and back the far side of the river. We ran out the N20 and doubled back to the quays where we headed straight out to the Jack Lynch tunnel (12K). Ships docked along the quay honked their horns, people stood in the rain and cheered us on. I genuinely mean this, you could feel the support hanging in air.

The absolute highlight of the entire run was when we entered the Tunnel. In the silence, one person belted out 'Oggy oggy oggy' and the entire tunnel erupted with 'OI OI OI' - twice! Everyone at this point was soaked through, the rain continued to fall but it really did nothing to dampen the spirit of the runners or spectators alike. 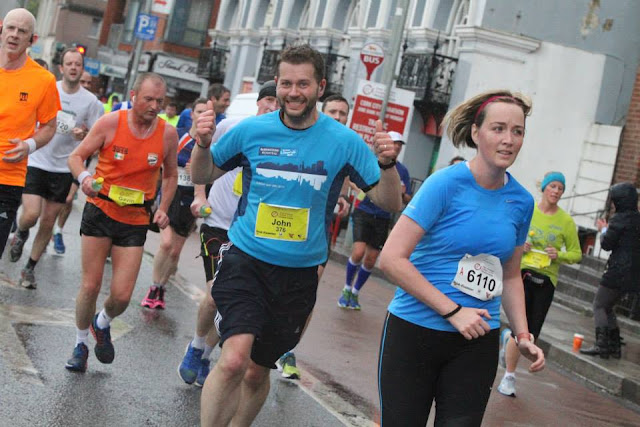 We turned off the road just past the Cork Camogie Grounds (18.5K) and ran the next 7K off the main road. We ran alongside Lough Mahon, passed the half way mark, over the bridge over the N40 and along this incredible forest park before joining the main road and the half marathoners at the 25K mark. At this point, the route became busier again as the thousands of half marathoners were now on the course also.

I overtook the 2:15 pacer for the Half so knew I was still on track for a Sub 4:00 marathon time as the Half started 1 hour 45 after the Full. We came off the main road at 29K (by running up an off ramp) which was followed shortly by another big hill at Lower Friars Walk. I actually don't mind hills but I did mind the lady standing at the bottom with the sign saying 'This is THE Hill' - I'm still not sure what she meant but she's lucky I didn't snap her sign off her (How is that meant to be motivating at the bottom of a hill?). I passed Mile 20 (32K) with 2:51 on my clock so I was still pretty confident I could Sub 4 hour it despite the heavy rain and blasts of wind.

The crowds remained to line the streets, we even passed a brass band out playing in the rain. There were also a few DJ's and speakers blasting some tunes to motivate us the last few miles as we ran out Model Farm Rd. When we turned back on the Carrigrohane Rd I knew we had "just 3 miles left". Despite people flagging around me, those last 5K felt like my strongest. As Cork got closer and with each passing kilometre, I was surprised at how I was holding up.

We ran through a small park (just off Mardyke Rd) at 41K where a man with bagpipes played us across a bridge while at the same time another man was being stretchered away. Everything about the run was quite surreal - I suppose I'd let myself get lost in the run the entire way around. I'd been in Cork city centre before but never around it and despite the rain (and the physical fatigue which was building up), I could really see what beauty Cork holds in its parks, in the river, in the city and the area around it.

I passed the Mile 26 sign just before the bridge bringing me up to the finish line on Patricks Street. There really is no feeling like the one that rolls around inside you for that last quarter of a mile as you approach the finish line. I crossed the line with a time of 3:54:37, absolutely delighted! My husband was waiting just outside the runners area with a towel, umbrella and jacket for me. 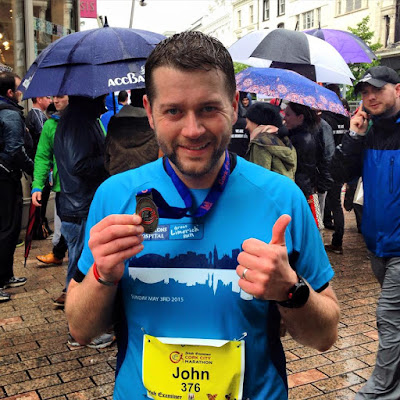 Soaked to the core but as proud as punch, we made our way back to the hotel. The 'Oi Oi Oi' from the Jack Lynch tunnel will resonate in my memory forever. The entire experience was incredible. With Marathon #4 notched under my belt (well... in my legs), I left Cork a happy man. I also got to meet a number of incredible people I've been following on Twitter for ages like Rory (@EatDrinkRunFun), Fiona (@CorkTweetyBird), Kevin (@KevinReihill) and Alan (@HeadChefAlan). Cork, you were awesome - a marathon I would definitely recommend every marathoner should consider.