The Fields of Athenry 10K

on December 28, 2015
I'm running three years and this was my third Fields of Athenry. There is some kind of beautiful closure to the running year with this race that I know so many people in Galway love. In 2013, I PB'd (45:09) and closed a fantastic first year of running. Last year, I hit the same time (not a PB) but loved it all the same. This year was different - I hurt my foot last month and hadn't done any running since. I semi-reluctantly turned up in Athenry on the morning of Stephen's Day as I was going to 'test' running on my foot. 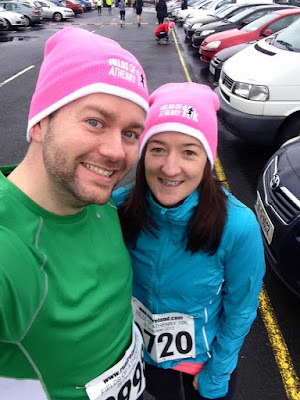 Myself and Aisling before the race

Myself and Aisling headed into the registration hall where we met a few people we knew before heading back to the car to ditch the extra layers we had on (it was so cold!). Each year, the Fields of Athenry freebie is a different coloured hat - this year it was bright pink. The start line was a sea of pink heads which was kinda cool. My goal was to take it easy and come in under the hour mark. Aisling said she'd run it with me so we both positioned ourselves between the 55 and 60 minute pacers. 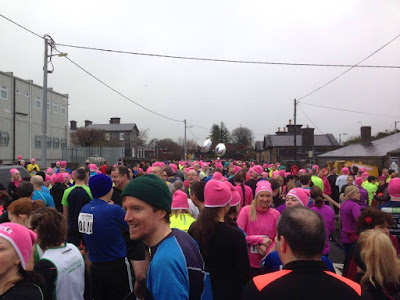 The race started bang on 11am and we took off with the 1000+ others running the 10K loop around Athenry. My foot felt fine as myself and Aisling chatted and the KM markers passed us by. I was conscious of my pacing as I really didn't want to push myself so was happy with the consistent 5:45/km pace we were maintaining.

I've never really paid attention to the crowds at this race before but as I was taking it easy, I had more time to notice everything going on around us. Other people were chatting, some laughing. Runners were encouraging each other on or high-5ing the kids who were standing on the side line. We had known the course was water logged (by passable) at points but that really didn't help when we had to go through two large puddles. Heavy wet feet are not happy feet but still, people laughed and shouted in shock at the ice cold water as they passed through. 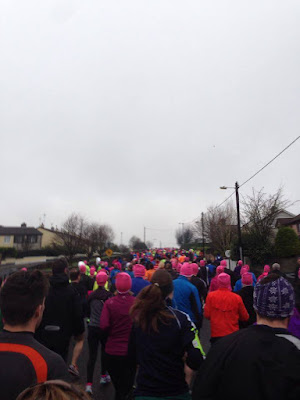 We hit 8km at 45 minutes which was interesting as that has been my finish time the previous two years. I still wasn't interested in finishing in a certain time, I was more interested in finishing having run the whole thing. My foot was holding up and I felt good. As we passed the 9km mark at the top of the hill by the GAA pitch coming into Athenry, there was great banter with the other runners. The lady to my right was nearly 6 months pregnant while I said I felt 6 months pregnant after all the Christmas indulgences. Myself and Aisling crossed the finish line together with a race time of 56:43. 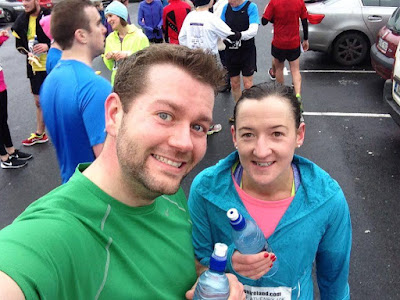 I'd forgotten how much I love running, a love running shorter races. In the past six months, I've stayed clear of shorter races as I'd been marathon training but really, I love pushing myself for distances shorter than 42km. I have a few races signed up for next year but nothing further than 10k. I'm looking forward to getting back on my feet and pushing myself to get some new PB's!