on May 06, 2016
The Galway 5K Series is six 5K's held in various parts of Galway on a Tuesday Night. This year it just seemed to sneak up really quickly. It is my fourth year taking part and I love coming back to it year after year for many reasons: Mainly because its a great excuse to meet up with my running buddies on a Tuesday evening but also it's a great way to track your 5K time over a 6 week period. I rarely sign up for 5K's as typically the money, travel time, hanging around the start line and free bottle of water just isn't worth the effort. Here you get six different races (and a t-shirt) all for €30!

Race 1 this year was in Ballybrit Racecourse which was handy as its right beside work! It was an early start for this race (7:30pm as opposed to the usual 8pm) so by the time I finished work, collected my race pack and got to the start line, there was little time to dally about. 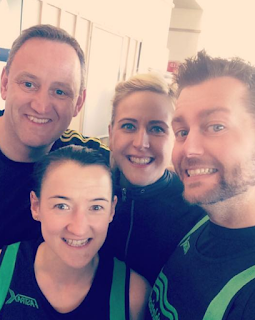 Gordon, Yvonne, Ais & Myself before the Start


The race started bang on 7:30pm in the crowded avenue outside the main entrance to the famous Galway Racecourse and took us on two laps of the race track before finishing close to the starting gate. The path around the racecourse is narrow in spots which lead to a cramped enough first few minutes until the crowd spaced out a bit.

It rained, the sun came out, it was windy and cold - really a race of four seasons out there which made the second lap just that bit harder when you could see people already finishing across the way. The notable difference this year from before was that we were going in the opposite direction to the horses, which if anyone knows the track means we go down hill (twice) as opposed to up hill on the long drag near the finish line. I clocked 4km and set my sights on a guy a bit ahead of me. We crossed the finish line together but I felt I really need an anchor or something to latch on to for the last few hundred meters. 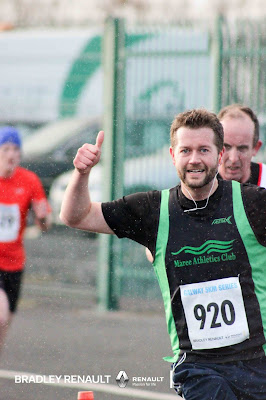 Overall I was happy with my time, 22:18. I've about 50 seconds to knock off that if I want to come anywhere near my PB (21:29). I clocked 21:29 in Craughwell back in 2014 and again at Galway Airport last May so its nice to try and keep it consistent (although I really would love a brand new PB). Anyway... the 5K Series is back so expect a lot of race reports over the coming few weeks :)