on May 21, 2016
I've always loved the Tuam leg of the 5K Series - probably because it's always been at the end. There has always been a great atmosphere and the course is usually littered with locals cheering on the runners which is always an added bonus. Tuam and traffic also go hand-in-hand, so to be prepared, we left straight after work, arriving in Tuam an hour before the race. 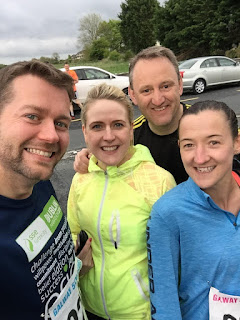 The race started shortly after 8pm on the same side road off the N17 . There are roadworks going on at the moment (building the new motorway) which added a little kink to the route but once we hit the first kilometer mark, we had a steady downhill for kilometer 2 which gave me enough time to pick up what I'd lost at the beginning of the race.

As we turned on to the Ballygaddy Rd (2.5km), my friends kid was on the wall roaring "Gordon's ahead of you!" - the running joke for the past few years between Gordon and myself has been that I will push him into a bush if he ever tries pass me in a race. I'd lost sight of Gordon as soon as the race started so had no idea where he was on the field but thanks to Cian, I knew Gordon was ahead. I trundled on up the road before turning back onto the N17 (4km) and making my way to the Ard Ri Hotel finish line.

My chip time was 22:39 which another disappointing run. I don't know how well marathon training and speedy 5Ks work together but I haven't gotten the hang of it. In Craughwell two weeks ago, I ran my fastest 5K this year but had done my long run on the Thursday before (as we were away over the weekend). I can only assume the five day break between the two has something to do with it. Regardless, Gordon not only beat me, he went an PB'd with an incredible time of 21:09. The next bush I see, he is going into it! 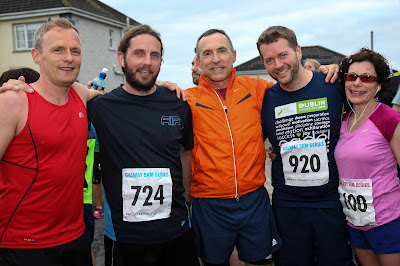 With Noel, Richie, Rob & Elaine after the Race (Pic by John O'Connor - link)