on May 09, 2016
Race 2 of the 5K Series saw 600+ runners land in Craughwell for their course which takes runners down through the village before turning left, then left again looping back to the train tracks beside the start point. People have said Craughwell gets a lot of PR's but I wasn't holding out much hope of beating my (21:29 which I clocked up back in 2014).

The Maree AC gang met before the race and had a quick group photo (better beforehand than afterwards). We have more in the club than seen in the photo below but with that many people around, its hard to get everyone together! We really probably should do a group photo some day! 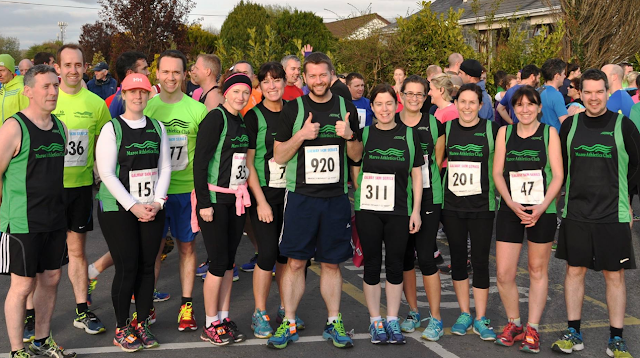 The race started bang on 8pm and I took off down the main road through Craughwell. The advantage of this course lies in the breath of the road at the start line which gave ample room to maneuver around people as I made my way past the 1km sign clocking up a 4:11/km. I surprised myself over the next two kilometers as my watched flashed 4:18 and 4:21 respectively.

I felt good as I pushed through 4K (4:25 flashed up on my clock) and it wasn't until that point I really thought I could PB. My watch was just before 17:30 and I thought if I could just knock out a Sub 4:00 kilometer, I'd PB. This was tough as I moved onwards towards the finish line. At the corner, a guy was counting the time and I heard him say "21 minutes" as I dug deep and ploughed on but unfortunately it wasn't meant to be... I crossed the finish line with a chip time of 21:33 - four seconds off a PB. 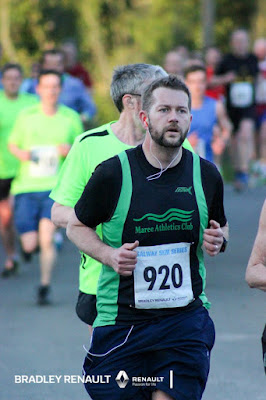 I was genuinely surprised at my time - I'd knocked nearly 50 seconds off last weeks time (22:21) and was so close to a PB. It's always tough to miss fractionally as you wonder what you could have done differently. A tiny little dig could have made the difference but I guess I'll never know, oh well, there is always next week (and the week after, and the week after!).