The View from The Other Side

on July 25, 2013
The Renville 5K was on yesterday evening in Oranmore (just a stone's throw up the road from the house). I was considering entering it but decided instead of running a race around my local haunt, I had a better idea... Why not volunteer to help out at the race and see what the view is like from the other side of the run track! 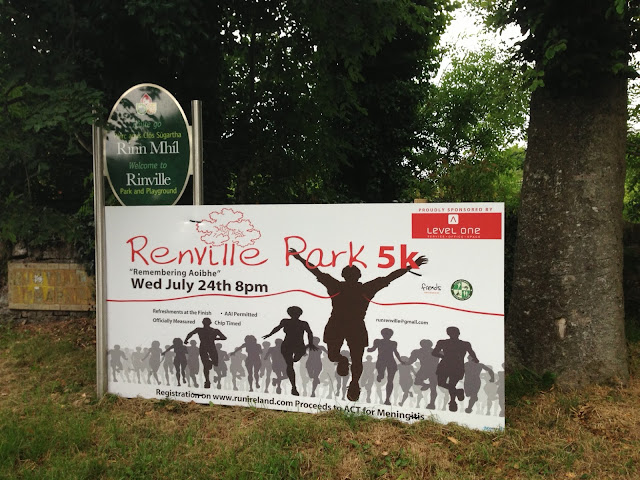 I had emailed the organisers and gotten myself a place on the volunteers list which I was more than happy to do. All I had to do was turn up two hours before the race and stay until the race was over. As I drove home from work yesterday evening, the skies opened and it bucketed down. 'What a manky evening for a run' wasn't the thought that went through my head... it was more like 'What a manky evening to stand around in the same spot for three hours'.

Wrapped up, I arrived at the Volunteer Tent (soaking wet) at 6.30pm where we were all given our marshal's hi-vis jackets and told where we would be stationed. That was it. Our instructions were simple: Keep the public off the race track. Renville Park is a very popular walking spot and is always busy - tonight was no exception.

As we waited by the start line, the other volunteers and I made ourselves busy by telling people to get off the road. If I'm honest I spent most of the time chatting to people I knew. The only proper work I did was when I was drafted in to help the lady set up the Start Line - which we set up the wrong way around and then had to quickly turn 180 degrees about 4 minutes before the race started. Awkward. (That's me in the Yellow Hi-Vis below). 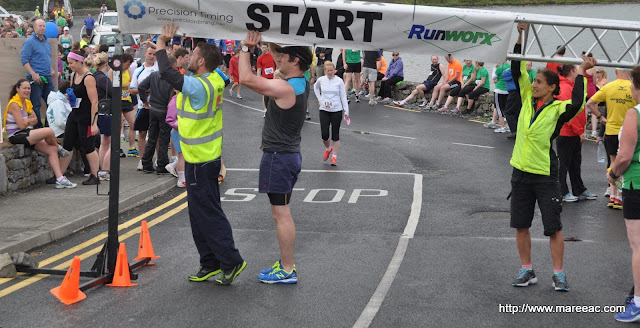 As I was stationed close to the finish line, it was nice to stand at the Start Line and watch the runners all head off. It's very strange watching a race from the side-lines. As you know, I have never spent my life in, on, or around sports of any kind. I don't know what spectators should be doing. So I did what I know best. I positioned myself on the wall well out of harms way and applauded the runners as they took off on their 5K run.

What was interesting was how 'slow' it all seemed... It took about 5-7 minutes for the last person to cross the start line (there was a good crowd of about 800 there). I suppose when you are in a race, you are only focused on getting yourself out past the crowd and finding your own space and pace, you don't really think about the runners at the front who have already left a cloud of dust behind them or the people behind you. 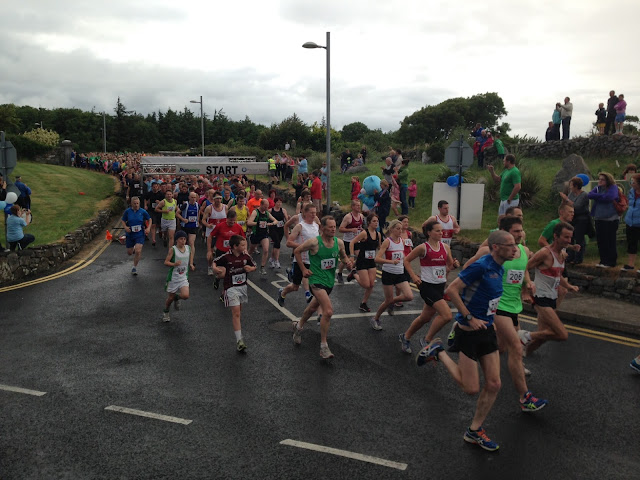 After the last of the participants took off, I made my way over to the post I had been told I would be responsible for... only to find about 4 other marshal's standing there. I decided to put my time to good use so I moved away from the marshals on the corner and moved further up the path to clear the path of spectators and passers-by while we waited for the first of the runners to approach the finish line.

I was less than 500m from the finish line (about half way down the path from the grave-yard car-park to the entrance to the woods). The next 45 minutes were amazing. I watched, applauded, congratulated and smiled at every single person as they came in... I don't think I've ever really appreciated a marshal before - they are just the people there to assist in the smooth running of a race right? Or so I thought...

The amount of people who said 'Thank you' after I clapped or roared 'Well Done' was amazing. Some people smiled, some people remained dead-focused on the finish line but I think from having been on both sides of the race track, I'll never knowingly not acknowledge someone who is shouting words of encouragement.

I was talking to another spectator beside me between the gaps in the crowd coming down the hill toward the finish line about 'stand-byers' etiquette. It seems that it's perfectly normal to call people by their club name as they pass (e.g. Well Done Athenry or Good Man Maree), it also appears to be ok about lying how far away the finish line is (e.g. Nearly there! or Just around the corner!).

The time flew... I clapped every single person who sprinted, ran, jogged or walked past me. I roared a variety of encouraging words. Why? Because every single person be it the young whipper-snapper who flew past me in a blur to the older walkers near the end - every single one of those people have paid money, come out, and completed a 5K.

I could have been the person who never even turned up at the start line.

I could have always been a spectator.

I respect every single person who turns up, pins on their bib and tries because running never gets easier, you just get better at it!