on June 07, 2014
Where the hell has the last six weeks gone? I think between Tour de Connemara, being a marshal, work and other things going on *cough-Wedding-Prep-cough* I kinda wasn't properly ready to say goodbye to this years 5K Series. Being part of Maree AC this year has certainly played a huge part as I felt part of something bigger than just me and my friends running. Meeting Sharon and the others wearing the Black & Green Maree bibs week after week has been really super but of course, the 5K Series would be nothing without the friends you lace up alongside each week. 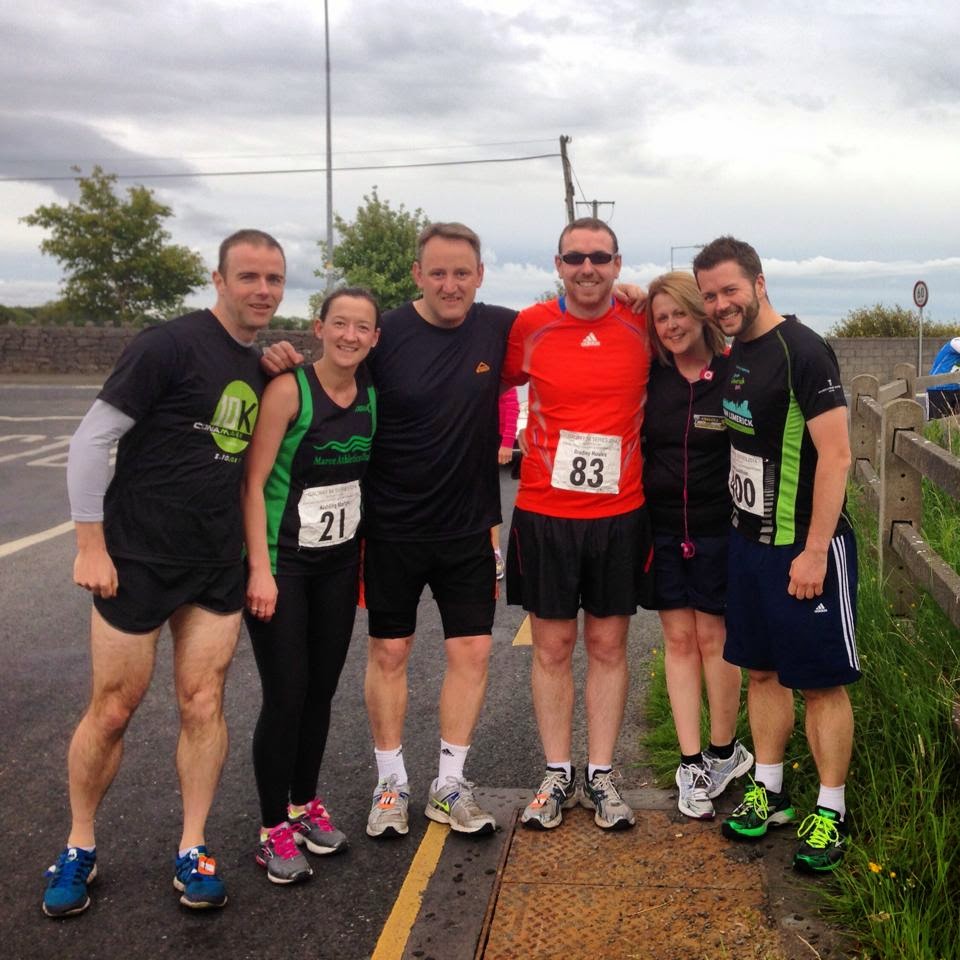 We arrived in Tuam with plenty of time to spare as I always get pre-race 'What if there is traffic and we get delayed and then we can't find proper parking' panics when I am running away from home. We met up with Michelle (who had brought her family along for support) and Gordon (who was putting on a BBQ afterwards). We popped into the Ard Ri hotel to use the facilities and realised they had the t-shirts available for collection already. (When you run 4 of the 6 races, you get the T-Shirt), so once we had T-shirts, we went back outside and warmed up on our way to the start line. 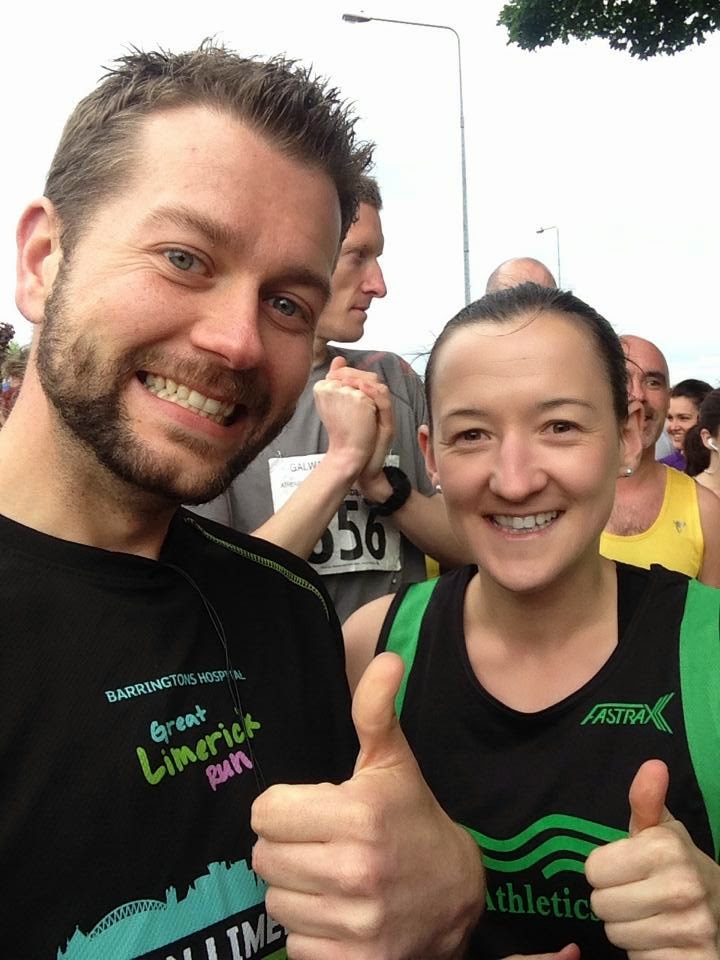 Myself and Aisling at the Start

The race started bang on 8pm and we were off. I clocked my first km at 4:17 so thought to myself 'OK, not too bad, pick up the pace a little'. The 2km clocked in a 4:07 so I was back on track and happy out. At some point here something went terribly wrong with my calculations. I don't know if it was the fact I was so focused on keeping on top of my times but the next two kilometres went by without a problem, so much so that when I passed the 4KM sign, I couldn't believe how great I was feeling and knew I only had to run this one in less than 4:30 to break under 21 minutes.

With this in mind, and the fact the last KM was downhill, I sped up as I knew I had it in me. As I approached the finish line, I could only see the seconds on the clock as someone was standing in front of the minute counter. I couldn't believe my eyes as it counted up... 31, 32, 33. I was about to cross the line in about 20:40... OMG! I felt amazing. It was at this precise moment the person standing in front of the clock moved and the minute counter read: 21!

FUCK! I crossed the finish line on deflated! How the hell did I get that so wrong? I was convinced I was about to smash my PB yet I crossed the line on my 2nd slowest 5K this year. Looking back at the times logged by the Nike App, KM 3 and KM 4 came in at 4:37 and 4:30. My guess, I was adding up the average pace times as opposed to the actual KM times. To say I'm gutted would be an understatement. It's an awful feeling to finish a race and be disappointed. 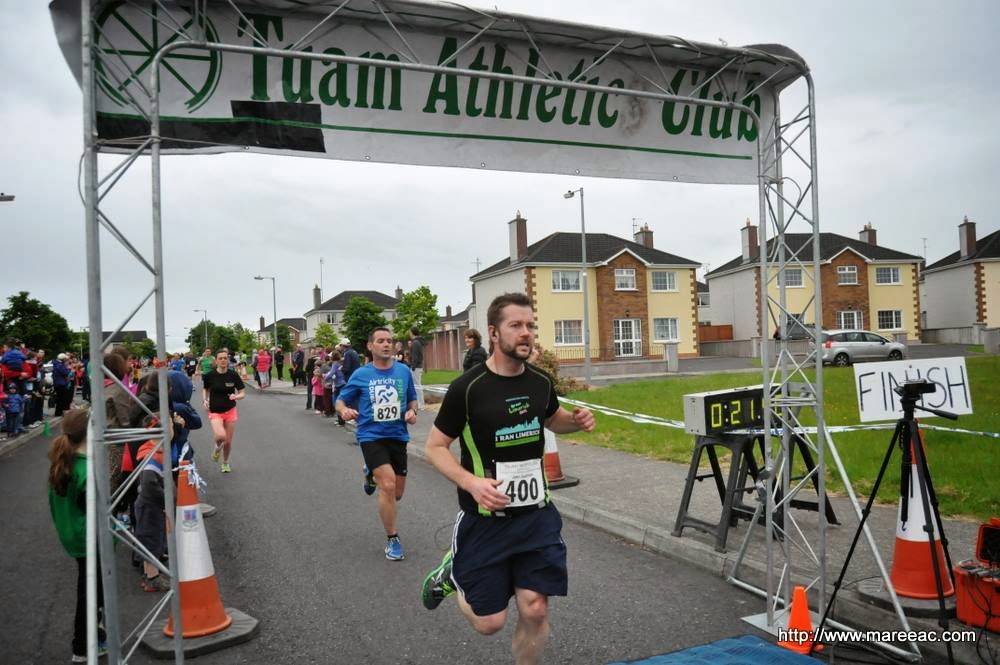 Can you see the disappointment on my face?

My official chip time was 21:39 making it my 2nd slowest 5K after Claregalway - the one I ran without a phone so had without pacing feedback. I'm so gutted but live and learn! I'm almost tempted to write the time splits on my hand for the next race just to remove the necessity to add up in my head while I run. (Yes I do realise admitting to not being able to add 5 times together is rather stupid but I just can't explain what happened).

After we all finished the race, we headed back to Yvonne and Gordon's where we had a BBQ in the rain :) After a lovely shower and a few BBQ'd burgers, I was back to feeling normal again. I've said it before but each race teaches me something. I'm still trying to work out if the lesson being taught this week was one about pacing, over-realistic goals/expectations or disappointment. Either way, I'm gutted to finish this year on that note considering how super the 5K Series was!