on August 11, 2014
This was the second year the Rock & Roll Half Marathon hit Dublin, and my second time running it. For reasons which should be apparent from my last few posts, my running has been quite slack of the past month, so pretty much my entire preparation for this half marathon was a single 5K run mid-July. Throw in a wedding, food, drinks, honeymoon, macaroons, chocolatiers, cocktails and hotels and mix it all together and you pretty much end up with how I found myself at the start line on Monday August 5th... In a haze! 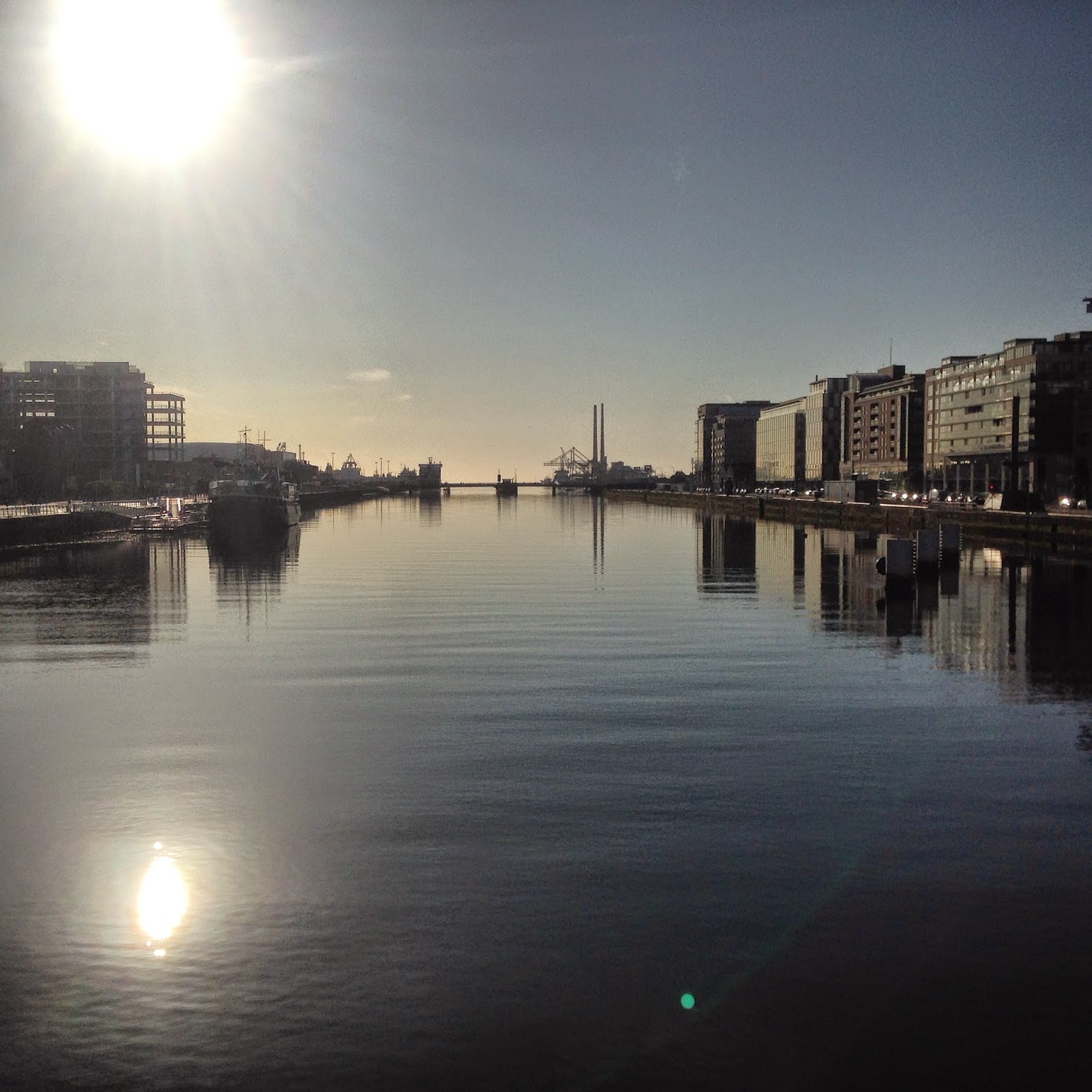 The Liffey at 8am on a Monday Morning

This was my 6th Half Marathon race, with my last in Limerick back in May giving me my fastest Half time of 1:40:32 and while I knew that was completely unattainable this time around, I was hopeful to just come in under the two hour mark. I hadn't run 21km in three months, in fact my furthest was 11km since my previous half marathon!

Running alongside me was Aisling and Gordon who were both doing their first Half Marathons so it was great to feel the excitement and nerves from them as all three of us headed for the start line on the Quays between the Convention Centre and The o2. I had been due to start the race in Corral #1 as I had set myself the extremely ambitious finish time of 1:30 when I signed up last November for the race. Instead of piling in to Corral 1 with all the lean prepared runners, I shimmied into Corral 4 and started the race with Aisling just after 8:30am. 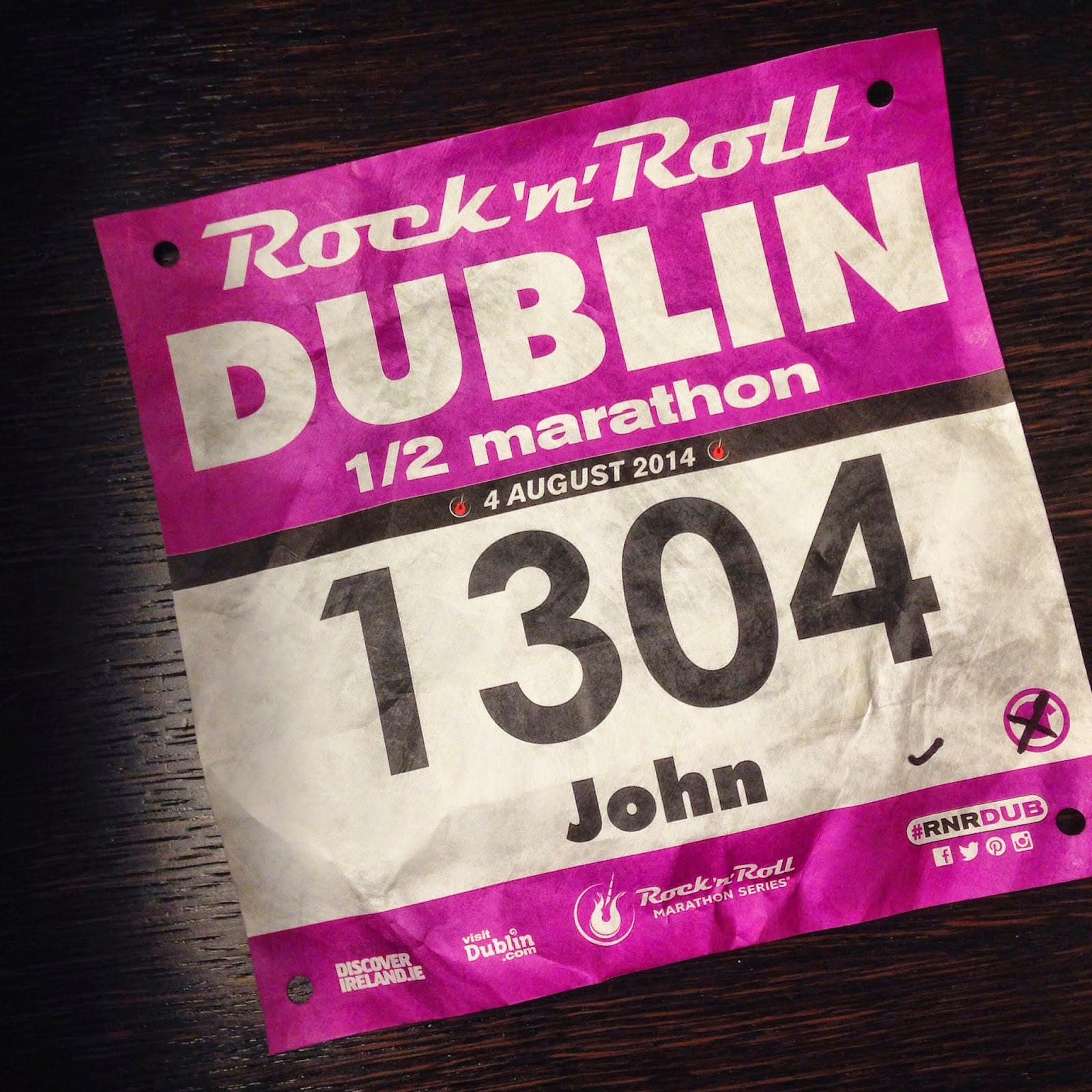 This years route was completely different to last year and I hadn't examined the route too well so I found it quite a surprise as it brought me places I had never been in Dublin before. We started off along the quays and hit the 5K mark just before Heuston Station. I was quite surprised with how I was holding up especially considering I was hitting each KM just under the 5 minute mark. 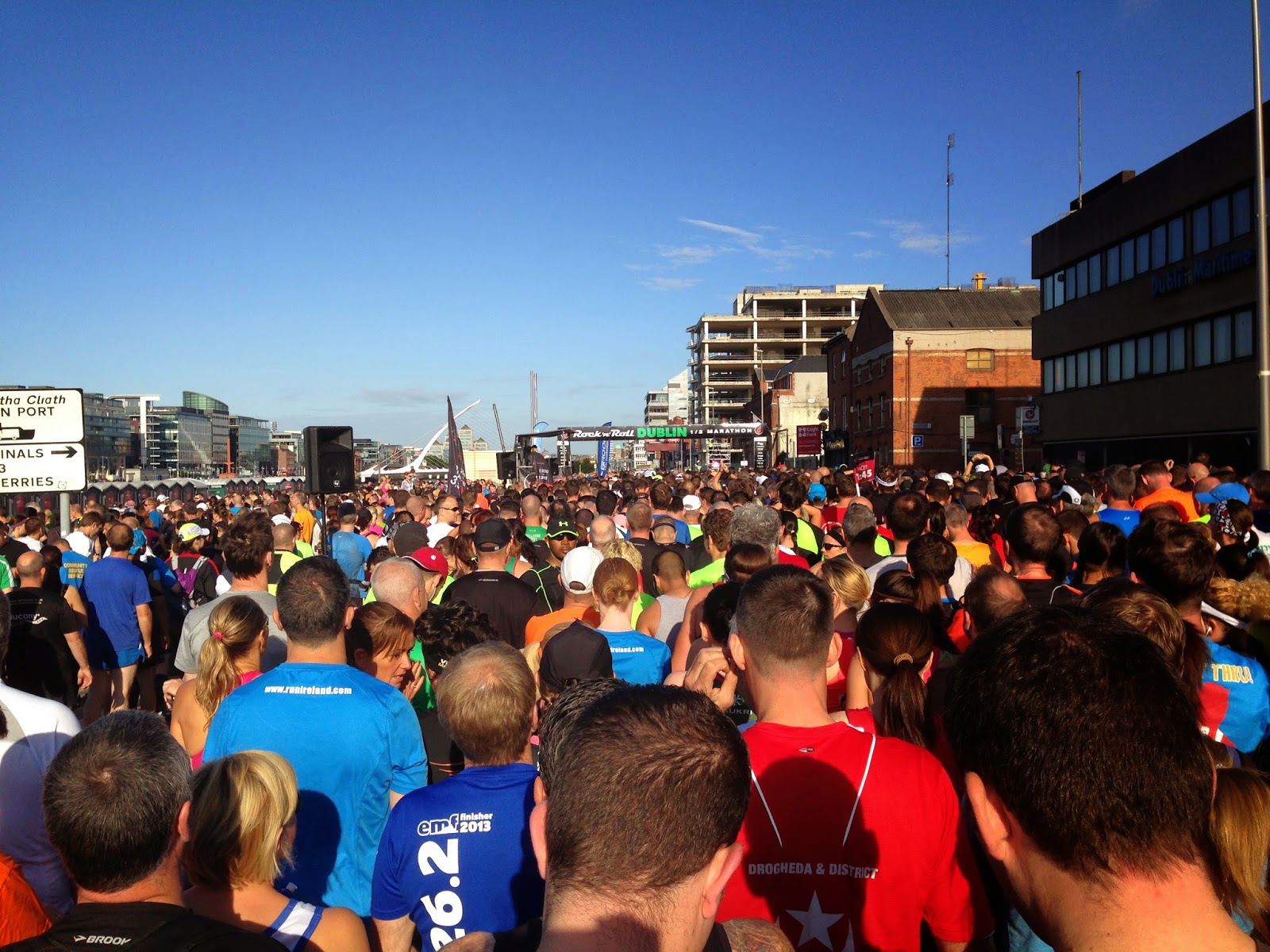 The route brought us up through the Irish Museum of Modern Art (which I never even knew existed), and out around by Kilmainham Gaol before bringing us down Sarsfield Road. We hit 10K just before we turned into the Phoenix Park. I knew the finish line lay somewhere inside the park and I was just at the halfway point. I have to admit, at this point even I was impressing myself as the clock was at 49:48 as I crossed the 10K sign.

It was at this point I think my body was like 'OK what the feic' because even looking back at my times, it was at this point everything got slower. The next 7K passed in a blur. I kept my head down and just kept telling myself I could do this. Sometimes even I surprise myself with my 'Mind over matter' mantra but here I am again proving to myself that it works. I've said before the thing I love/hate about running is that not a single step is ever given to you. You and everyone else has to work, putting one foot in front of the other. There are no short-cuts, no fast-track techniques.

For me, the single worst point of the entire run was around the 17K mark when we had to run alongside the finish line and finishers village. A woman running alongside me said 'Cmon, 4K more and we are there... we have the hard work behind us'. That is my second favourite thing about running. People genuinely help each other along. Just a little word of encouragement at a time when you are second-guessing yourself can really make a difference.

The run through the park showed me plenty, from the elderly man who had stopped and these old ladies were like 'Come on, show the young ones we can still do it' to the guy who had stopped to help another guy out who was clearly struggling in the heat. Nothing made me happier to pass the 21K sign as I knew the finish line was just around the corner. I crossed with an official chip time of 1:50:01 which blew my mind. I couldn't believe it - I feel half way between my best Half time and the time I was aiming for (2 hours).

I wasn't waiting at the finish barrier for too long when Alan, Gordon and Aisling crossed the line. Aisling & Gordon finished their first half marathons while it was my first run with Alan which is kind of brilliant. Imagine how different our round the world trip would have been in 2010 had I not been a lazy overweight git! 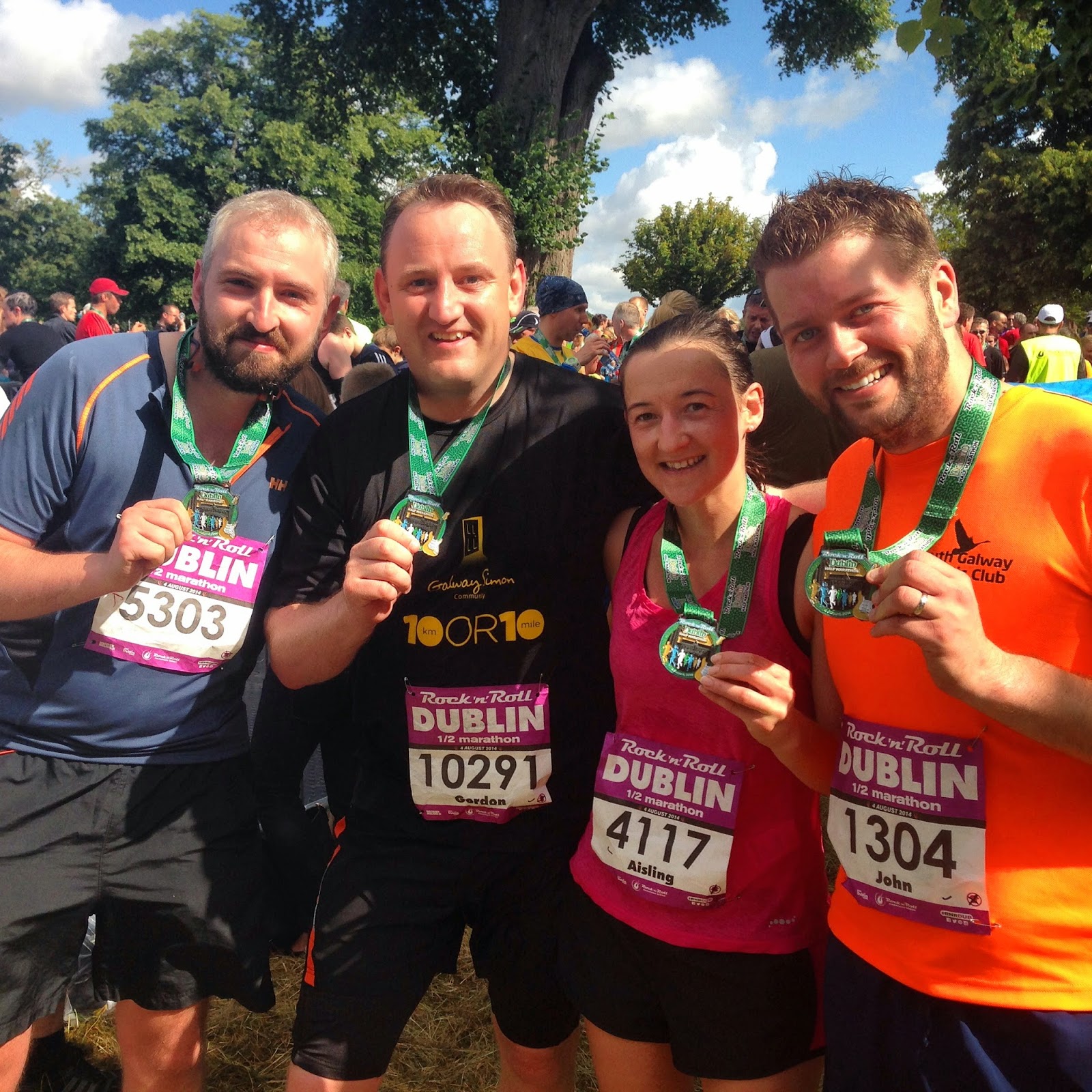 I clearly have a lot of work to do to get myself back in the running game. My legs ached afterwards and my body creaked for the rest of the day but dya know what - it held up and kept on going despite me throwing it in at the deep end. Ever run teaches me something and the 2014 Rock & Roll Half Marathon has shown me how important training is, my finish time suffered as a result. That being said, I'm giving myself a 'Get out of Jail' card on account of this being the first run I've completed with a silver band on my finger :) 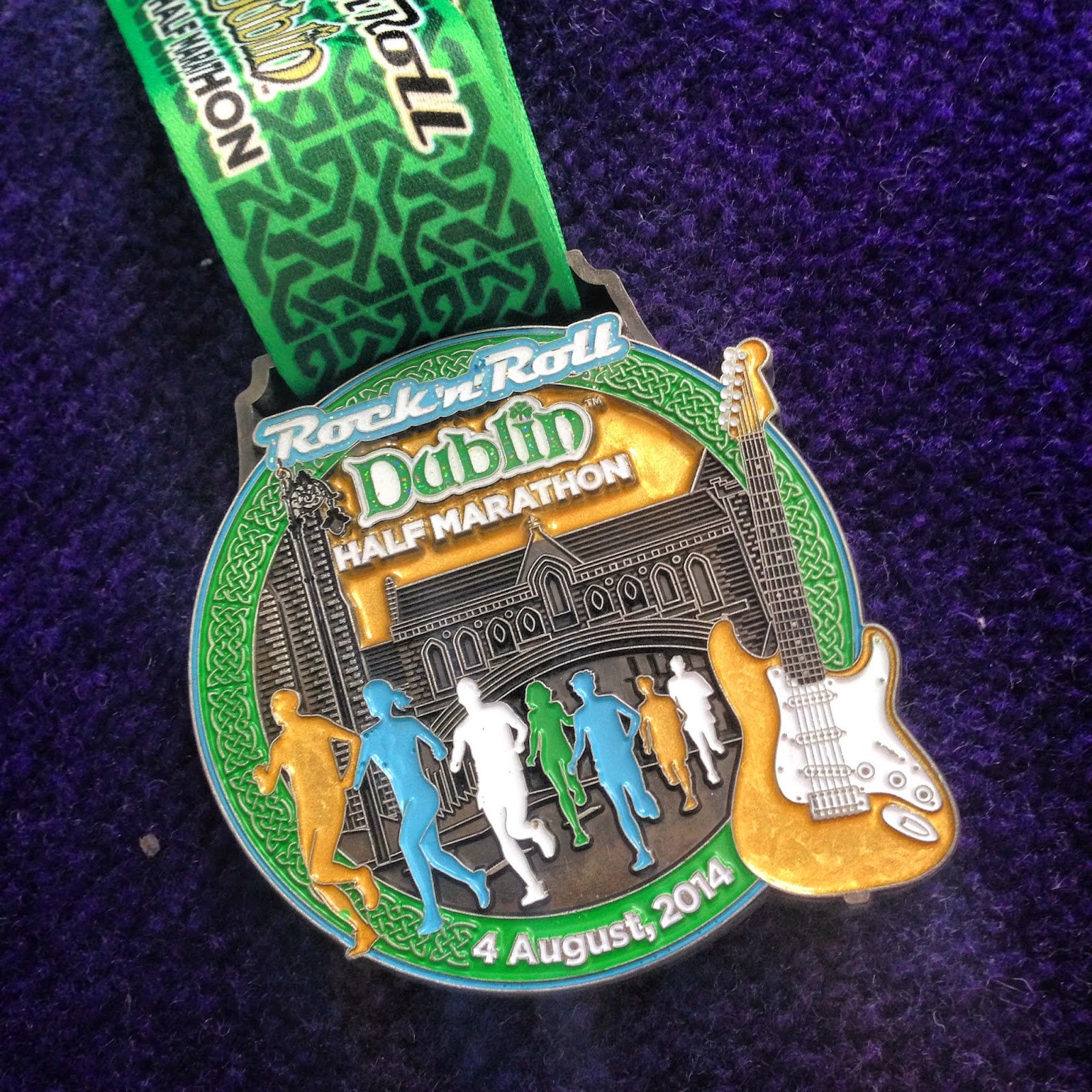