The Waterford Half Marathon

on December 18, 2014
Two weeks after giving up on the Heart Rate training (following my unspeedy performance in Portarlington) I found myself on the road to Waterford with Gordon on a miserable Friday evening. I'd never been to Waterford before and by-jesus I now know why. Its so far away! We got to the hotel about 9pm on Friday night, had a drink and chat before hitting bed early enough. The alarms went off at 8am and we grabbed a quick bite before heading out to WIT Sports Campus for the start of the Waterford Half Marathon. 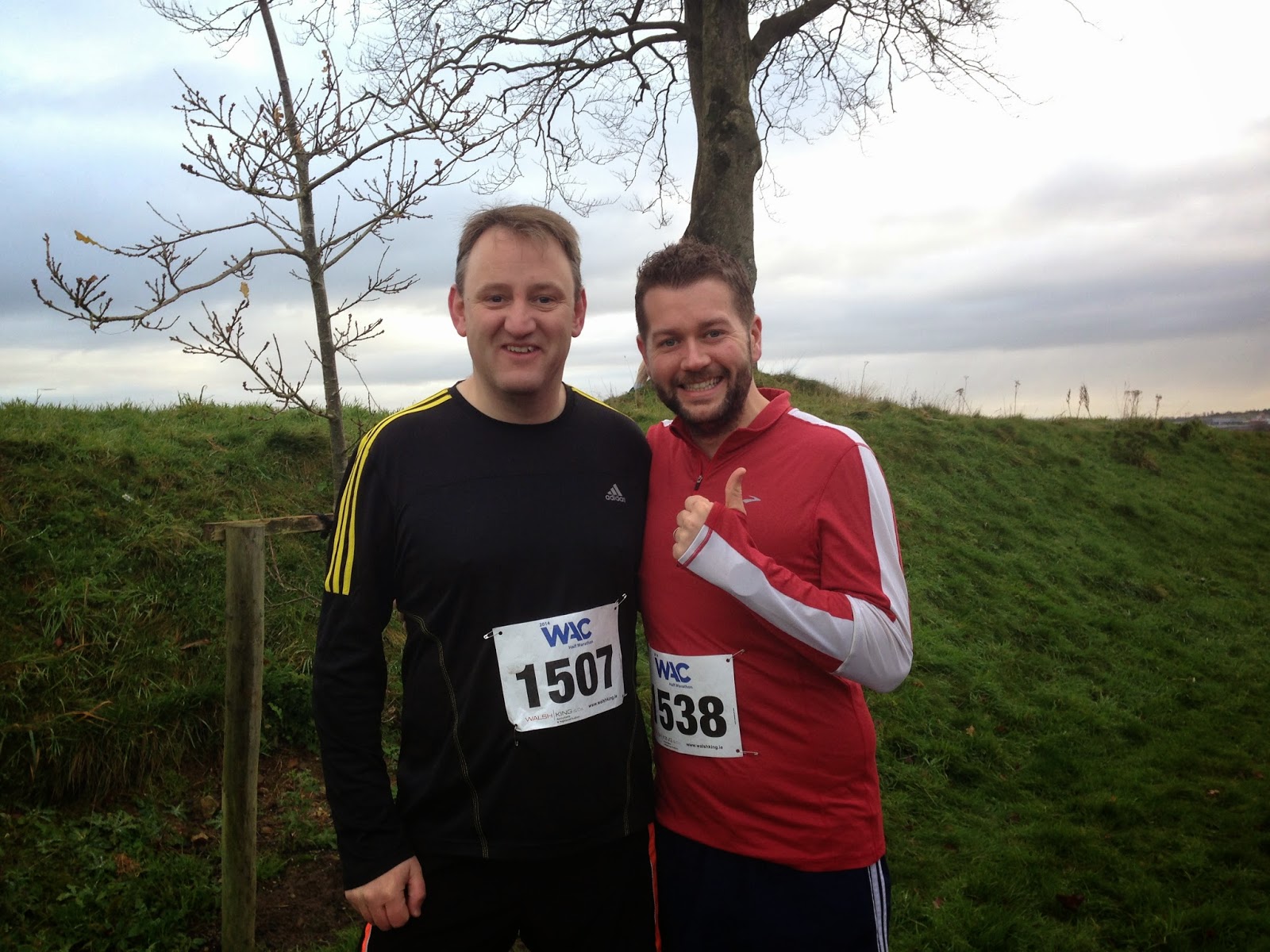 Myself and Gordon at the Start Line

The rain cleared up as we parked (about 50 miles away) and made our way to the start line which was up the hill behind the Sports Campus. The start was sectioned off by 10 minute markers which made for an extremly easy and efficient kick off to the race. I positioned myself behind the 1:40 pacers but in front of the 1:50. My goal was to finish Sub 1:50 if possible. Considering I had run 1:45 in Connemara in September and 1:56 two weeks previous, I had 1:50 pegged as my goal time. 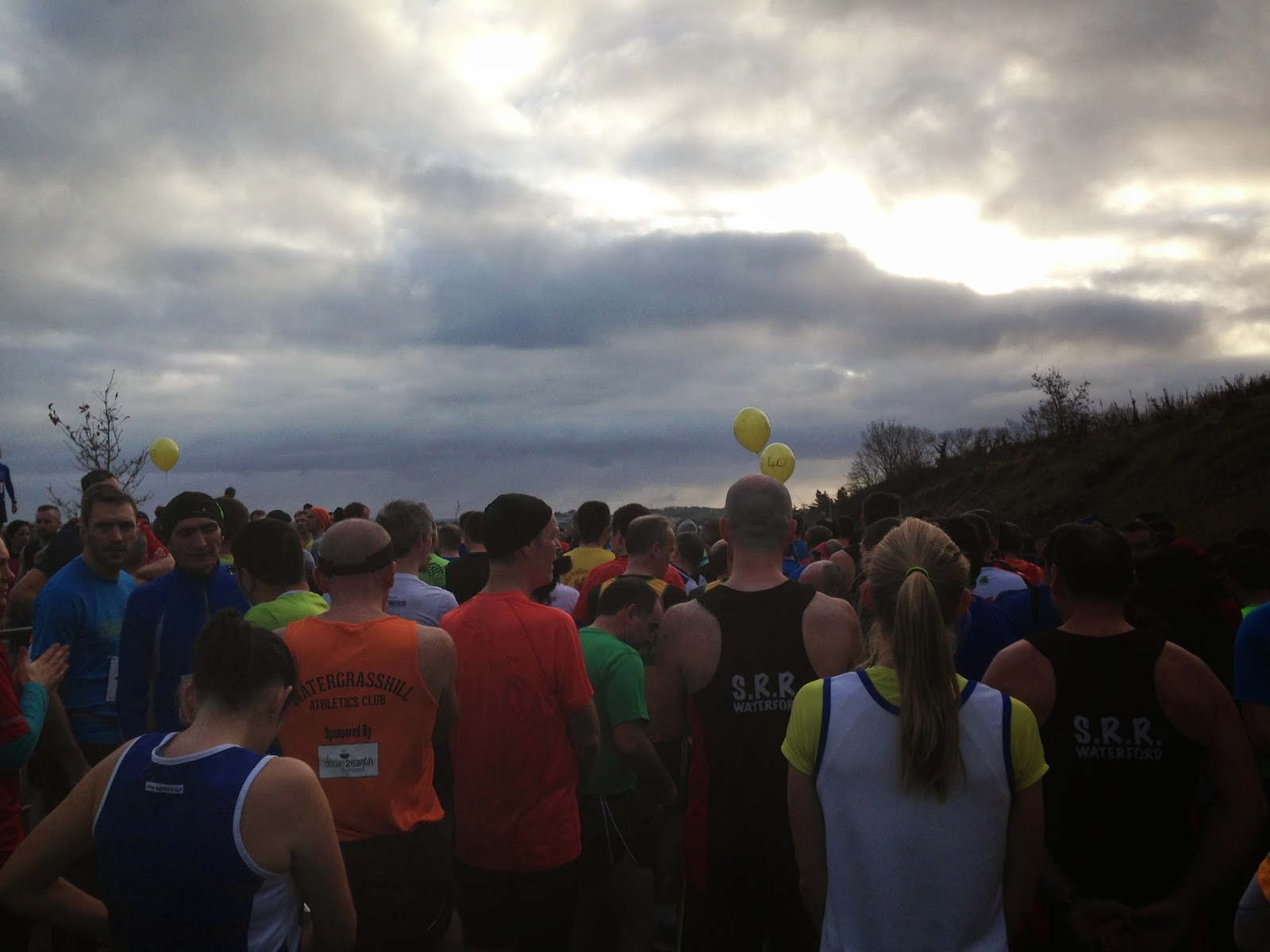 Waiting for the Whistle...

The race started shortly after 10am and I took off with the huge crowd (1500+) downhill and away from the Campus. Seen as I didn't know Waterford at all, the run reminded me very much of the Great Limerick Run - Lots of estates and industrial estates. The route itself was lovely and I found myself really in a stride by 5K.

I had a chat with two women about cake (they were deciding who was going to get the larger slice once they finished, I was just glad someone had put the idea of cake in my head). I was watching my clock and each kilometre was in around the 5:00 minute mark (4:48, 5:08, 5:10 etc) so I was happy. Around half way we veered off road and ran along some pretty dodgy country roads in desperate need of a flat surface. I kept on going - curious to see how far running without watching my heart rate would take me.

I felt great as the kilometres clocked up and before I knew it, I was looking at the 12 mile sign. It was the first time I knew exactly where I was in the race and what the road ahead had in store. It was a clean straight run out to the WIT Campus which had just appeared on the horizon. I felt great and still had plenty in the tank. The phrase 'Finish on empty' is one that always sticks with me, especially close to the end of a race.

I took off and notched up two x 4:45 kms to cross the finish line in 1:46:46. I was delighted with myself. It was a lovely course, well organised with plenty of road closures and water stops. Across the finish line we cured for Chocolate Milk, our pack (with a cool WAC Bobble Hat) and Medal. Gordon crossed the line shortly after I did (1:50) which was a PB for him so with two happy heads on us, we left Waterford happy out. 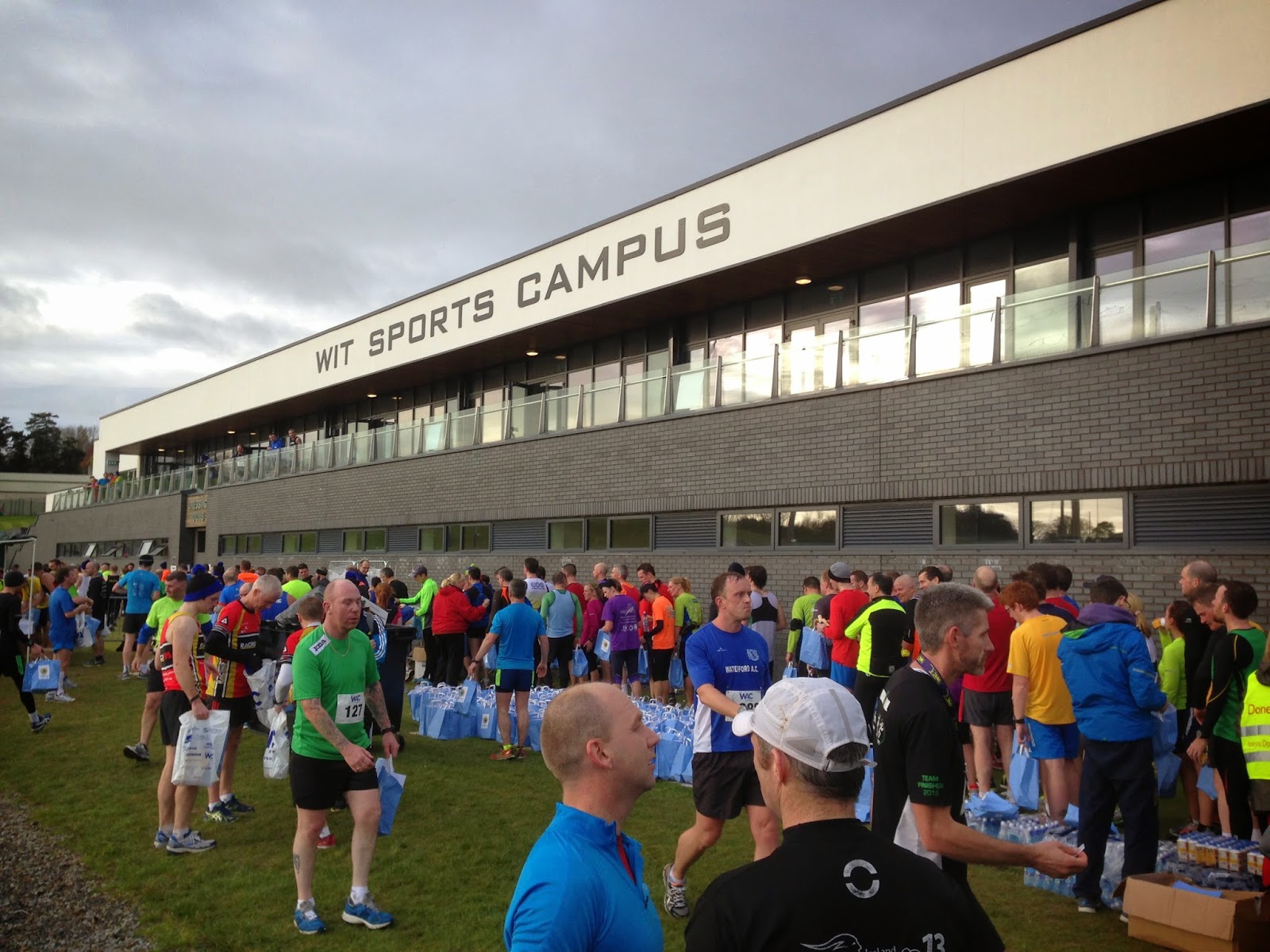 The Queue at the Finish Line 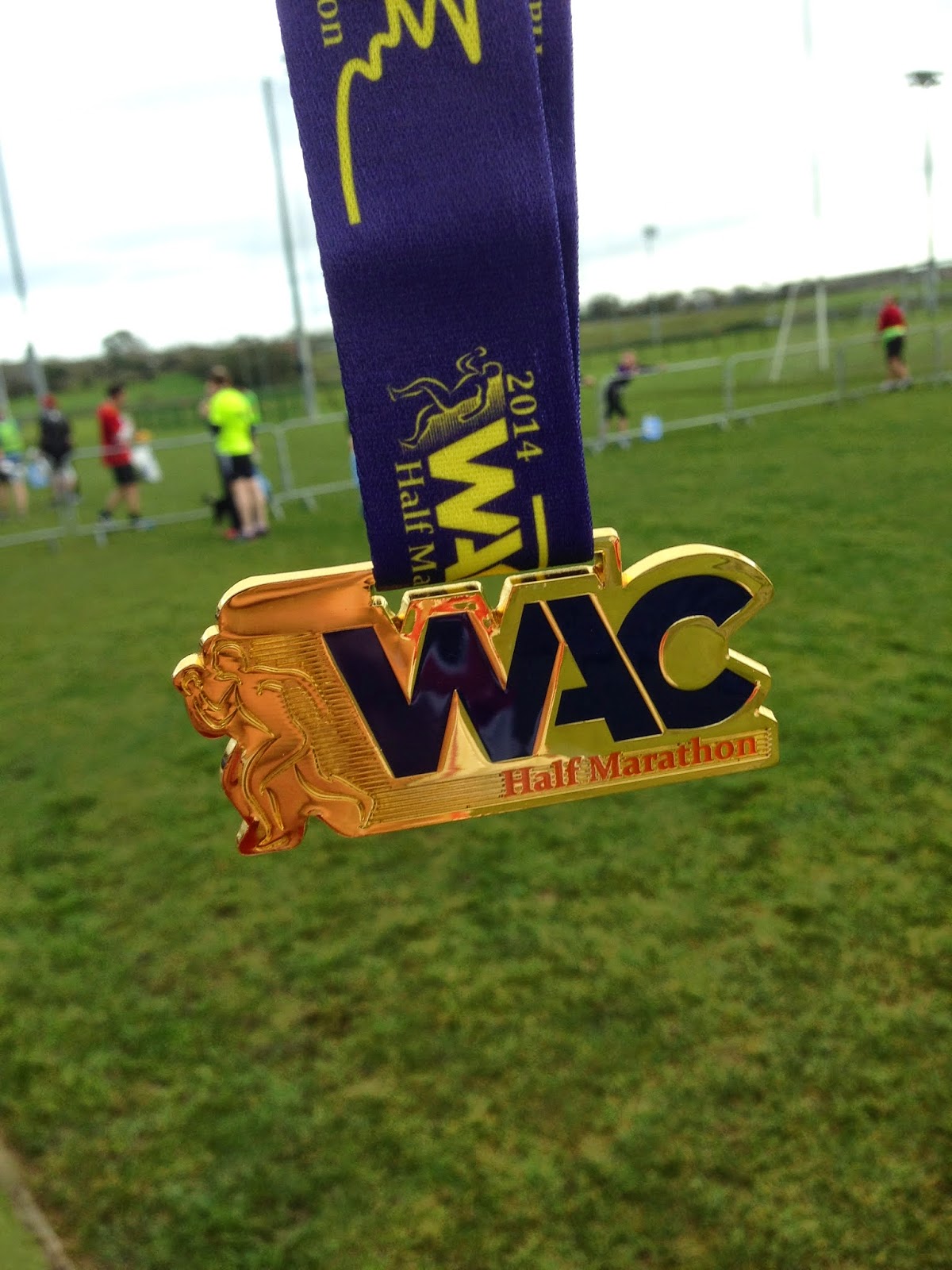 Half Marathon #9 in the bag, that was my 6th this year and completed the promise I had made to myself back in August to run one a month for the second half of the year instead of training for a marathon. I've really enjoyed running one a month and it's definitely something I'd love to do again, just maybe not in counties as far away as Laois and Waterford. 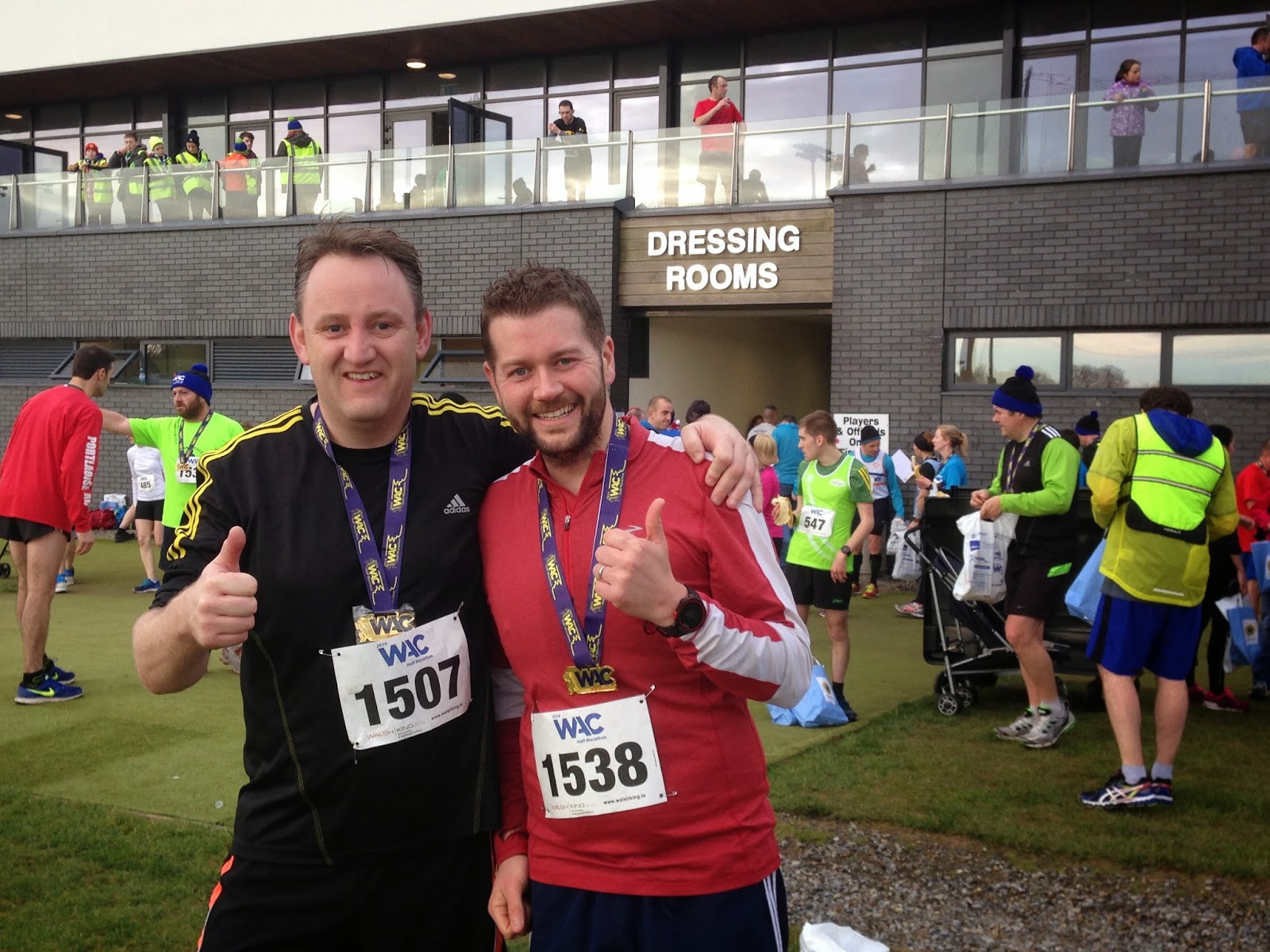