on August 31, 2015
This was one I hadn't planned on doing but after last weekend's gruelling 20 miler (in training for the Berlin Marathon which is now only four weeks away), I decided to take a 'breather' and sign up for a Half Marathon to fill the gap between my two 20-miler runs. I figured a challenging 13.1 miles would be equivalent to the scheduled 15 miles I should have been running... So on Saturday morning at 8:15am, I left the warm comfort of my bed for Craughwell. 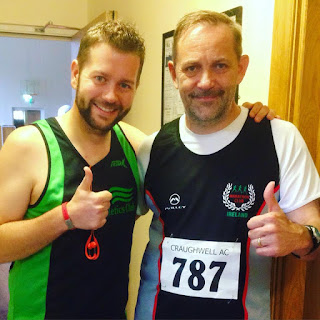 With Patrick from How Many Belgians

In the registration hall I met Patrick whose blog I have been following for ages. He planned on running 12 marathons in 2015 in aid of Gorta Self Help Africa but I suspect he'll smash his original target as Craughwell was his 11th marathon this year. His blog, How Many Belgians, is well worth a follow. Link here.

The run started outside the Community Hall in Craughwell at 9am - the route was a 5.4km loop which I had to repeat 4 times while the marathoners had to loop 8. One group had left at 8am so there were already people on the course, one of which was Michelle Burke (@chelleburke) who I love. She is an incredible woman who was running the marathon as a warm-up for an Ultra Marathon the following day!!! I know...

Anyway, the course was a relatively flat loop, with a table at the start line and half way around. The table at the half way point was crammed with jaffa cakes, coke, jelly babies and loads of other essentials. I'll admit I was jealous of the early marathoners stopping off to refuel but my abstinence from all fizz and chocolate until after the Berlin Marathon applies even when running a half marathon. 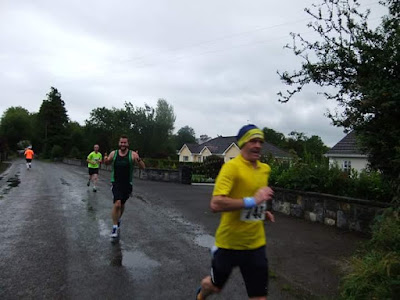 Rain down, Thumbs up!

I really didn't know how I'd find loops but honestly it was such a change from the norm I loved it. There was a little double-back bit (shown in the picture above) which meant you had a chance to see others on the course. I kept my eyes peeled for Michelle but we never crossed paths. The loops continued and I clocked each of my km splits close to 5:00 so ran happy.

The last loop was rather glorious as I knew most of the other runners were doing the marathon so knowing they had to keep running while I was going to finish was enough to motivate me through the 'close to end' fatigue that sometimes happens. I ran up through Craughwell village one last time and crossed the finish line somewhere around 1:45:30... and thats when I saw Michelle! 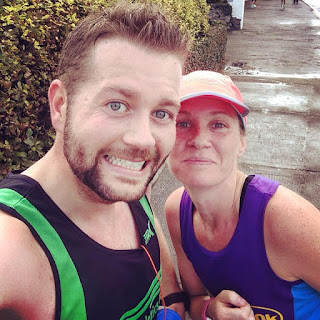 Myself and Michelle (who was about to start her 6th lap)

In all the excitement of grabbing a selfie with Michelle, I forgot to stop my watch and therefore registered my finish time as 1:46:05. I skipped the post-run feed in the main hall as I knew I'd be tempted so once I'd collected my medal, I jumped into the car and headed home happy out with a super morning of running. Half Marathon #12 was unplanned, unexpected and just fantastic! It was a low-key affair but was just what I needed. Now I'm prepping myself ahead of this weekend's 20 miler and then I have the Athlone Flatline (Half Marathon #13) the following weekend and then taper! 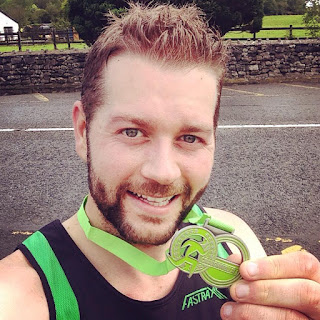