on October 02, 2015
Myself and Brad headed to Berlin on Friday, two days before the Marathon. This, it turns out was a genius move as it meant we could go to the Expo as soon as we landed. I've never had to queue for more than 5 minutes for my race bib before but bloody hell this was something else. We arrived at Tempelhof Airport, the Expo venue at around 3:30pm on Friday afternoon and the place was wedged. We made our way through disused airport and its hangers following the 'Race Number Pick Up' signs along the floor where we were eventually met a security gate like screening area where we were given wristbands (for entry on Sunday) and our bibs and chips.

We were over an hour just looking at the many many stands at the Expo, each one offering either the promise of the 'most beautiful', 'friendliest' or 'flattest' marathon in its region while other stands offered every variety of running fuel/shoe/clothing imaginable. After a coffee and look around the food stands, we decided to jump ship glad we sailed around pretty seamlessly just imagining the crowds that would descend on the place the following day. 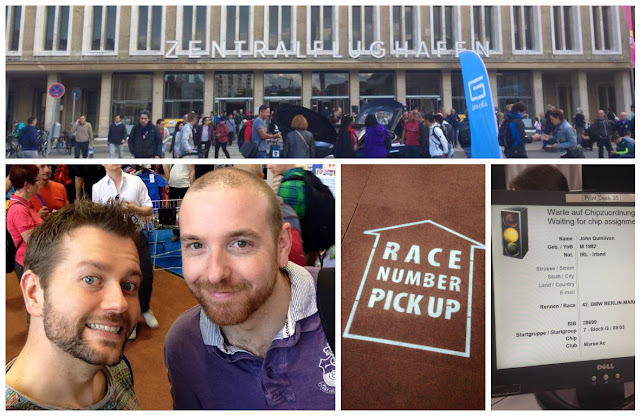 We spent Saturday doing touristy things like walking along the East Side Gallery/Berlin Wall, visiting the Brandenburg Gate all while carb loading in preparation. Despite the best intentions of being in bed by 10pm Saturday night, I was still lying awake after midnight with excitement for the marathon. This is the first time I've been genuinely excited with 26.2 miles looming overhead.


My alarm went off at 6:30am and we had a quick breakfast in the hostel before making our way over to the start line. It seemed like everyone in Berlin was headed for the Brandenberg Gate on Sunday morning with the blue 'entry' band on. Hundreds filled the underground where we merged with hundreds others as we arrived at the entry zone. 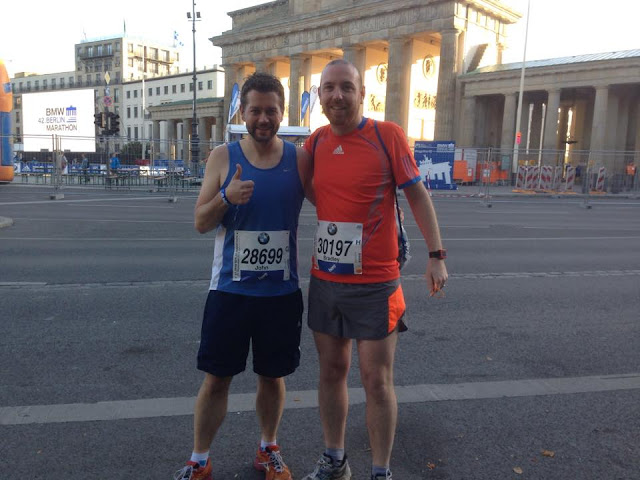 Myself and Brad said our goodbyes and best of lucks at about 8:50am as we had to be in our starting corrals for 9am. I was in G, Brad was in H. I don't think the photos below capture the atmosphere and excitement as I stood with over 40000 others while the start was counted down. Hundreds of balloons were released as at 9am as the first pen headed off. What I wasn't expecting was the 25 minute wait before my group finally took off. 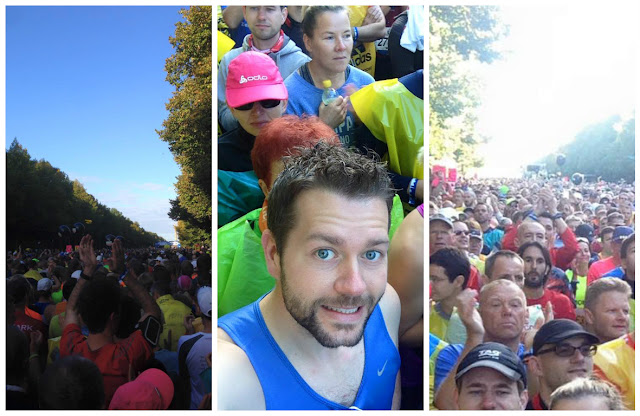 The run itself was incredible. The first thing that I still can't get my head around was the sheer amount of other runners. It was exciting, it was fun but it was semi-dangerous. People were constantly clipping heels and I saw a few people trip up/fall. A few times someone would accidentally clip one of my heels which throws your balance off if not prepared for it.

The first water stop (at 5km) was certainly an experience - the entire field in front of me nearly came to a stand still as people crossed in front of others grabbing and spilling plastic cups of water all over the place. We were running through inches of crushed plastic for about the next 500m - As disappointed as I was that we didnt get bottles, I can see why they couldn't... someone would have been killed!

The other thing I wasn't expecting was the heat. Weather reports had said it would be about 9deg and overcast but we actually got quite a warm morning with blue skies. It was 20 degrees by noon but there were water stops nearly every 3/4kms which really helped keep hydrated. (I quickly learned how to indicate you were moving in to grab water and manoeuvre back out into the running lane).

The spectators and supporters were absolutely incredible - and really made the kilometres pass quite easily. I saw old people banging pots with wooden spoons, young families waving their country flags from balconies above the crowds, a student flat which had set up massive speakers and were blaring 'Walk Like an Egyptian' while the crowd beneath danced. My favourite was probably the lady in the tin-foil dress with the blow-up guitar moonwalking to Scooter.

As I ran, I stayed looking through the crowd. It's a completely different experience when you know you aren't going to see your loved ones face in the crowd (he stayed home as he was working). As I rounded the corner at 26km, I saw my friend Anna in the crowd and (probably much to her disapproval) I ran up and gave her a giant hug and kiss. Again later around 37km, I saw Stephanie (who I've never met in real life before only know from Twitter) in the crowd so again I ran up and gave her a kiss. I was certainly kiss-happy on Sunday...

The final few kilometres passed with relative ease (which is kinda crazy to say when I think about it). I had really hoped to break 3:50 but I knew when passing the 40km sign at 3:44 that was out of the question so I took the foot off the accelerator a little and really enjoyed the final 2km as we ran through the crowded streets of Berlin towards the Brandenburg Gate and the finish line which I knew lay just beyond it. A wave of emotion washed over me as I ran under the gate listening to the noise of the crowd - I crossed the finish line at 3:58. 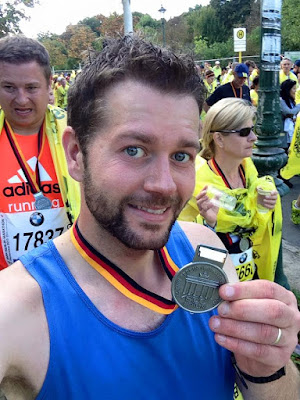 Berlin was fantastic! It delivered everything I had hoped it would and more... (except beating my previous marathon time but I'll forgive Germany that). The race, the spectators, the route, the runners and the streets all mixed together made for one hell of a marathon. I don't know if anything will ever match the feeling I had when I finished Dublin (my first marathon) but this came a very close second. It was most definitely the 'easiest' marathon I've run (as if you could ever call a marathon easy but you know what I mean) and it left me feeling slightly sore but pumped for the next one! 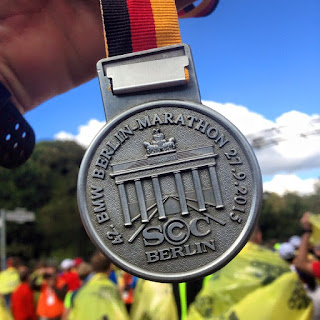 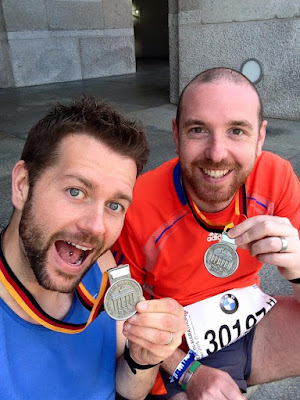