on October 27, 2015
Two years ago this weekend, I ran my first marathon in Dublin - so there was something very welcoming about returning to the scene of so many amazing memories for Marathon #6. I travelled to Dublin on Sunday with Vicky by train where we met Mirko. In Heuston Station I met my friend's friend (Ricky) who was in Dublin especially for the marathon so together, the four of us grabbed a cab over to the Expo in the RDS to collect our race packs and see what was on show. 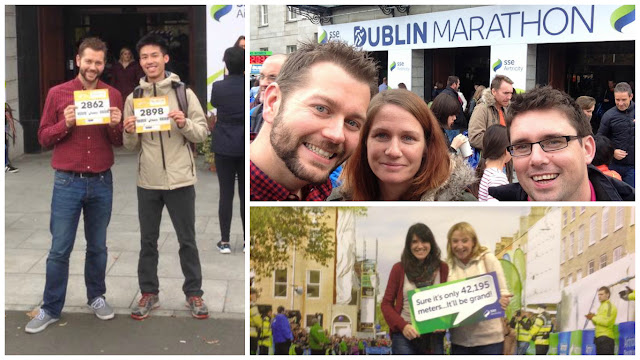 At the Expo with Ricky (left), Michelle & Joe (top) and Catherine & Vicky (bottom)

We were in and out within half an hour and we all went our separate carb-loading ways. Myself and Ricky headed into the city where we grabbed a Starbucks (ya, I had a Pumpkin Spice Latte), Murphy's Ice-cream and a drink in Panti Bar before heading home early. I was in bed by 10:30pm and I slept straight through until my alarm went off at 6:30am. I had breakfast, got ready and was out the door before 8am. I met up with Ricky and we made our way to the start area where we actually didn't have as much time as I thought we would waiting around. 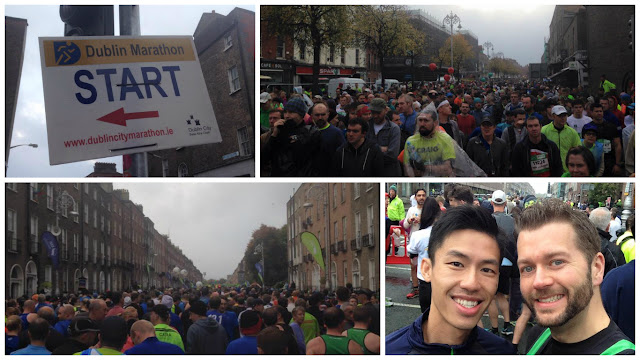 My goal was to run this in 3:50 so I placed myself at the back of Wave 1 (behind the 3:40 pacers) and my plan was to try run a 1:55 each half. That meant maintaining a 5:27/km pace which I felt was achievable. I ran Berlin four weeks previous at a 5:38/km pace but felt the conditions in Dublin (less crowded, less humid) would help.

The race started at 9am but I kind-of missed the buzz as I was so far back. It was about 2 minutes later when we crossed the start line and headed off on the 42.2km run around the city. I wasn't too far into the run when I just didn't feel 100%. As the run progressed I noticed I kept getting alternating stitches which has never happened before and my stomach felt... heavy. I ignored the niggles as sometimes on a run your mind has a devilish way of playing tricks on you. It's usually lying so I chose to ignore it and run on. My time splits were working according to my plan and I hit 5K at 27:15 which was to the second, bang on track.

The first half was beautiful, damp and windy at parts as we ran up through Phoenix Park, through Castleknock, back into the Park and out through Kilmainham. I clocked Half Way at 1:53 which was two minutes ahead of my planned 1:55 but my body was really struggling. I was keeping myself distracted by taking in the incredible atmosphere from the crowd (Just a side note but I've never experienced anything like the Dublin crowd - so many people with signs, jellies, water and t-shirts).

I crossed the 30K mark at 2:43 which again was bang on track for a 3:55 finish but I just couldn't do it! I knew quitting wasn't an option but my legs were starting to burn and I just couldn't shake off the stitch. It was shortly afterwards I walked for the first time and I think mentally that broke me. My pace chart paints the picture in a way so I'll save the gory details.

Roebuck/Heartbreak Hill really was tough but I used the opportunity to walk. Again, this is where the spectators really came through with every second one giving me words of encouragement and really willing you up that hill - I even saw Ray Darcy at the top applauding as people made their way around the corner. The run in along the Stillorgan Rd was tough as many people were walking or like myself, were completely knackered. Walking is always so tempting but I figured even if I was clocking up 6:30/km, it was faster than walking (10:00/km). It was on Nutley Lane at Mile 24 when the 3:50 pacers passed me I really felt broken. I knew as we turned onto Merrion Rd it was a straight 3km to the finish line and I was at 3:36 on my watch.

I really wish I could tell you I dug deep and unlocked some magic from deep within but I couldn't. As I walked passed the RDS (Mile 25), I saw Helen from Maree AC cheering me on from the sideline. I really wanted to run fast or lie down but my legs were twinging and I was afraid they'd cramp up on me. I clocked a 7:00/km as I came through Ballsbridge. I dragged myself down Northumberland Rd and across the finish line as the clock read 4:00:55. 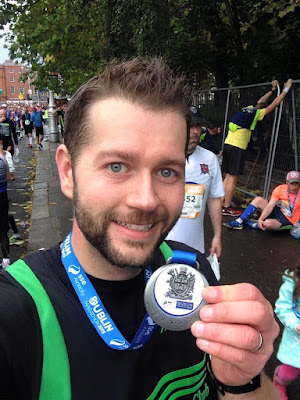 Everything hurt as I made my way through the finishers' area. There was no glowing sense of pride, my heart didn't leap with a sense of achievement. I collected my medal (which was lovely) and I hobbled out of the runners' area and made my way back to Yvonne & Gordon (who were very kindly waiting to bring me home).

Tough runs don't last - tough runners do! This hasn't broken me or derailed me in any way but I think I've learned something new about myself and running yet again - I really gave it (the run) everything I had and despite the fact it wasn't enough for me to reach the goal I had set myself, I finished my 6th marathon. I had just run my 4th marathon this year (my 2nd in 4 weeks). I don't know why I can be so hard on myself but I really need to get a grip. I'm fit & healthy and ABLE to run a marathon. Full stop - that should be more than enough. 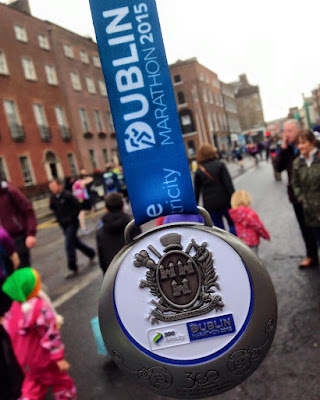 Everyone who crossed the start line had the exact same course to run, similar mental battles and varying levels of coping with it. Sometimes you power through the run, sometimes the run overpowers you. Dublin was fantastic, it just wasn't for me on the day. I'm still happy I ran it and I still think it has to be one of the best out there if you are going to do one! Dublin may have conquered me yesterday but don't worry... I'll fight back! See you next year Dublin :) 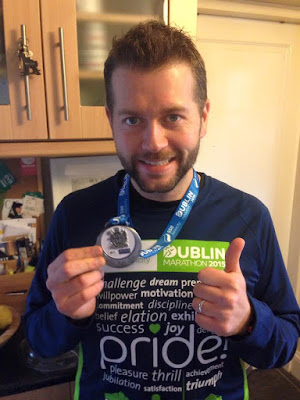