on March 09, 2016
Similar to the way in which a wheel turns, there is something quietly significant that happens inside when you notice something make a full turn. Last weekend saw the Kinvara Rock & Road 10K (and Half Marathon) take place which marks the beginning of my 4th year running. This blog was set up back in January 2013 originally as a place for me to write about my experiences and training up to the start point of the Kinvara 10K race... and suddenly here I am four years later lining up yet again to take on a route that I know I'll never forget. 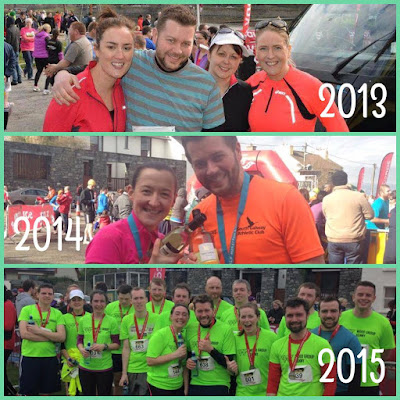 I remember so much about my first run but for some reason, as I ran last Saturday, I thought about my Grandfather. My grandfather happened to be in hospital in Galway on the day of the race back in 2013 and I visited him before the race as he had just had an operation. As I was leaving, he loudly told the man in the bed beside him I was off to run my first marathon - I didn't correct him but distinctly remember feeling pride in the fact my grandfather was boasting about what I was about to take on.

At that time, running 10K was like a mountain I was about to climb, a rough sea I was about to navigate through. I believed I'd do it but lacked the confidence to know how unscathed I'd come out the other side of it. I crossed the finish line that day in 1 hour, 1 minute and 21 seconds. Four years later and it remains my worst 10K time but the one I'm most proud of. 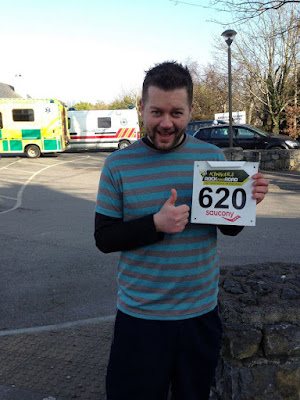 Anyway... I've gone completely off topic but just wanted to mention how much I've been thinking about the wheel coming full circle as I lined up for my fourth Kinvara run and all that has happened in between (which is all written about here on this blog). So, fast forward to March 2016 and I'm in Kinvara with Aisling, Yvonne and a gang from work and I'm feeling hopeful. I'm really getting back into the swing of running and pushing myself during a race so I had a Sub 50 (but ideally closer to 45) in mind as we took off from Kinvara village at 12pm along the route I know so well. 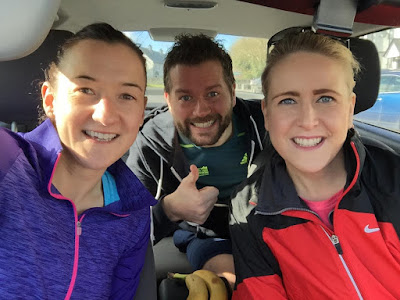 On route to Kinvara with Aisling & Yvonne (and two bananas)

The first 2.5K takes you away from the village towards Ballyvaughan and I was pretty happy maintaining a 4:30/km pace. The route turns left down country roads for the next 2.5K before a timely water station just before the 6K mark on the Moy Road. I was still maintaining my pace up to this point (22:24 at half way) but the remaining half wasn't as easy. I knew the hill around the 7K mark was going to hit me and it did (4:50/km). The last three kilometers passed relatively easily and I crossed the finish line at 46:09 - Delighted! 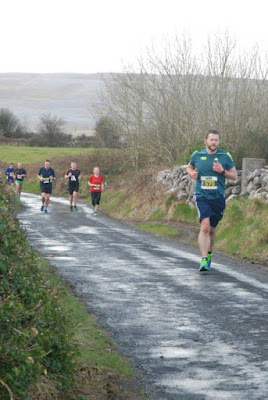 Around the 6K mark (Pic from Kinvara R&R Facebook - link)

I don't know if it was the weather (which was fresh but cold with some scattered showers) or a decrease in numbers but the finish line and atmosphere seemed somewhat subdued this year. I waited around the finish line and cheered my friends and work colleagues home. We had a quick banana and bottle of water before heading to the Hall for a great spread of donuts, brack and biscuits. The coffee did the job warming me back up and I left Kinvara happy out with my effort on the day. My next mission has been set - 10K under 45:00! 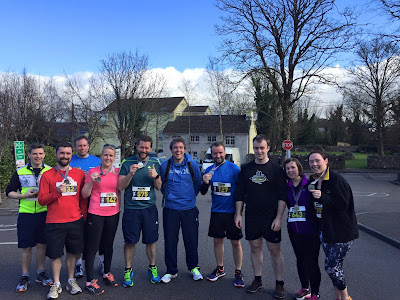 With the gang from work after the run