The Fields of Athenry

on December 28, 2013
I had signed up for the Fields of Athenry back in November before I'd committed to the Run Streak. I had thought it would be a nice way to keep me in check over Christmas Day as I'd have a run the following day but little did I know at the time of signing up it would be my 26th day in a row running. I was feeling excited but a bit achey heading into Stephens Day. Between the double serving of dinner on Christmas Day and the previous 25 days pounding the roads in my legs, it was with apprehension I left Ennis at 8:30am on St Stephen's morning bound for the Fields of Athenry.


I arrived at the Registration Hall (after a skiddy journey up on the icy roads) at about 10.15am where the announcement was made that we wouldn't be starting until 11.30am and the kids race was cancelled due to the weather conditions. The hall was buzzing as it filled with people either collecting their registration bibs or hiding from the freezing cold outside. 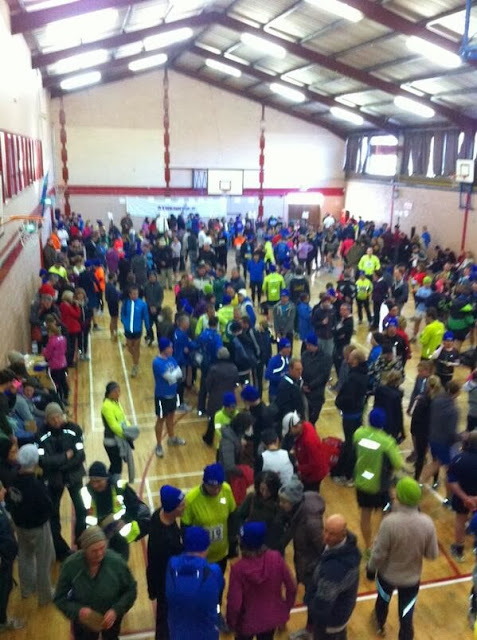 
Inside I met Phil, Noel and a few other people I knew so it was nice to catch up while we waited to be called to the start line. When we were called out at around 11.15, we all gathered alongside the train station. I lined up with the 45 minute pacer which I felt was a smidge optimistic. One of my Goals for 2013 is to run a Sub 20 min 5K and a Sub 45 min 10K. I figured I would stay with the 45 minute pacer for as long as possible. My last 10K at the beginning of December was just over 48 minutes while my PB for a 10K was back in June when I finished the Clare 10K in 46 minutes 41s.

The race started bang on 11.30am and we were off. I started off nice and steady and found myself slightly ahead of the 45 minute pacer by the first KM sign. I was clocking just under 4m 30s/km for the first 5km and although I could see the 45 minute pacer behind me, it was the first time I actually thought to myself "Oh my GOD... I could do this in under 45 minutes". 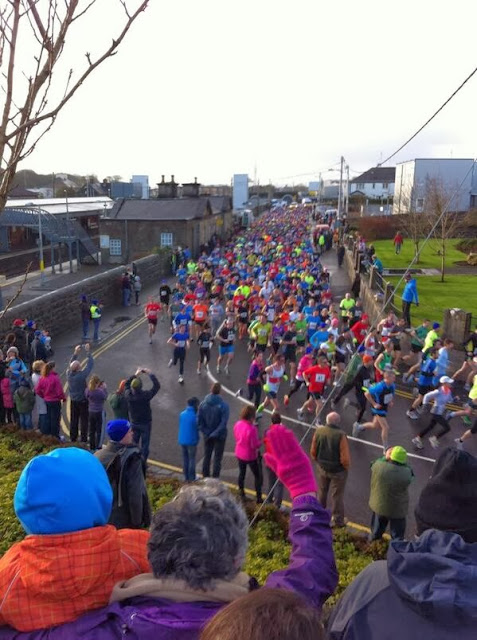 With that in mind, I kept on going. I passed the half way point with 22m 25s on the clock (so I had a whopping 5s to spare). I was starting to feel it all over but kept on going. This race really made me realise how much I do love running shorter distances like the 5K and 10K, something I didn't get the chance to do much of the latter half of this year. I made a promise to myself to work on this for the first half of 2014.

As I passed the 7K marker, the 45 minute pacer overtook me, and with that about 30 people running with the pacer. It was very disheartening to see the pacer increase the distance between you and them but I always kept her in my sights. I knew passing the 9K marker that I needed to increase my pace to claw back at the 30s offset between my current projected end time and the 45 minute goal I had set myself...

Unfortunately it wasn't to be. Despite my best efforts and pushing as hard as I could, I crossed the finish line with a chip time of 45 minutes and 9 seconds. I experienced such a mix of emotions. Raging with myself I didn't push myself that little bit more to knock those extra 9s off my time but at the same time so proud of my time. I knocked over 3 minutes off my 10K from earlier this month and over a 90s off my previous 10K best. Also considering this was my 26th day running straight (clocking up over 200km), I'm well pleased! 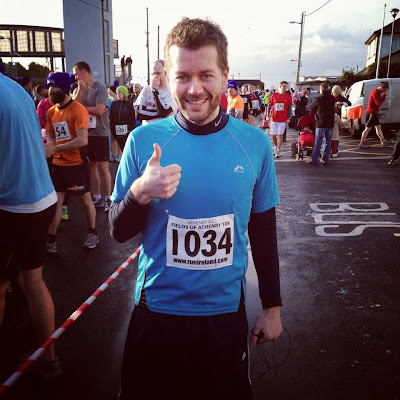 Thumbs Up for Effort

All in all, I loved it. I loved the crowd, I loved finishing under the arch in the middle of Athenry, I loved the people wrapped in hats and scarfs applauding us on route, I loved the coffee after the finish line. I'm so proud of how far I have come this year and I reminded myself of one of my favourite quotes as I drove home:

It never gets easier - you just get better at it.

I could NEVER have imagined I'd be where I am today this time last year. In fact, back in March when I crossed the finish line in Kinvara at 61 minutes I thought "wow, thats the best I'll ever do" yet here I am constantly surprising and surpassing myself. A 45 minute 10K then was as far off then as I see a Sub 40 minute 10K now. The only difference between then and now is... I know its something I can achieve if I work at it.