on December 09, 2013
I had signed up for the Santa Dash a few weeks back to try and kick me out of my PMB's (Post Marathon Blues).  'Shur what's 10K in a Santa suit' says he to himself smugly. Oh boy, how wrong was I!

I've said it before and I'll say it again - I learn something from every single race. This race has thought me that the past is behind you - all you can do is prepare for whats ahead of you. As you know, my November was a bit slack (in terms of Weight Watching and running). In fact, I hadn't run further than 5k since the Marathon at the end of October so I was a little bit apprehensive going in to this 10K but clearly slightly deluded as I thought I could beat my previous 10K PB (46 minutes). 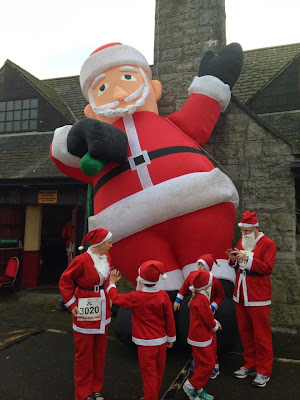 
Myself and a gang from work met up at the Claddagh Hall last Sunday morning at 11am where we picked up our timing chips, bibs and Santa Suits. I have to say, the banter was great and there was a lovely pre-race vibe in the air as Christmas tunes were blasted from speakers. It was lovely to see so many people there with their dogs (some in Christmas attire), prams, young children. 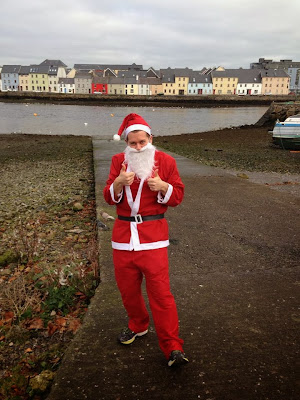 
The race kicked off bang on 12 noon as Christmas music pumped out from the DJ  box at the start line. My only issue with the race was the fact the 10K was the 5K route twice (not what had been advertised on the website). So as you can imagine, it was extremely disheartening to run right back to the start line only to repeat the loop again. Thinking back at other races/runs, there is something therapeutic about reaching the half way point. I always have that "from here on I'm homeward bound" approach, however in this instance, half way was home - so I had to turn on my heels and head straight back out the route I had just come.

The second 5K was much harder than the first as I spent the whole time passing people in white bibs (5K'ers) heading home. I could feel myself starting to slow down as I came up to the 7.5K mark which meant from there it was plain sailing along the Galway Bay coastline to the finish line. I crossed the line with over 48 minutes on the clock so I knew I hadn't broken my previous 10K land-speed record of 46 minutes but I was happy. 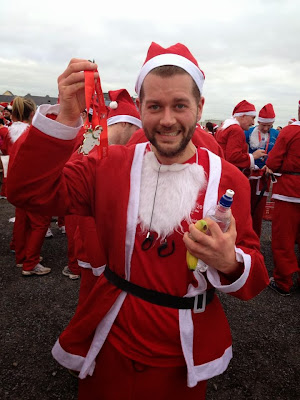 Happy to be finished!

The best part of the whole experience was the Santa costumes! While mine started to fall apart (the belt was broken before we even took off), it certainly did add a twist from your standard run. I don't think anyone crossed the finish line with their crotches still intact but we had some laugh looking at what remained of peoples costumes. Some were missing beards, others their hats. I had a beard/earphone tanglement half way around the track which ended in me pulling off the moustache part by accident.

Post race, a lot of us stayed in costume (because we had nothing else to change in to) and headed to the Beer Tent at the Galway Markets. Following a quick detour via the food stalls, we celebrated a great run. This is the second run I have run through work, my first being the Kinvara 10K - my very first 10K back in March. There was something very fulfilling about running with the people who had been there when I took my very first step. There is something kinda frustrating about running with people who you still can't catch up with... but I will :) 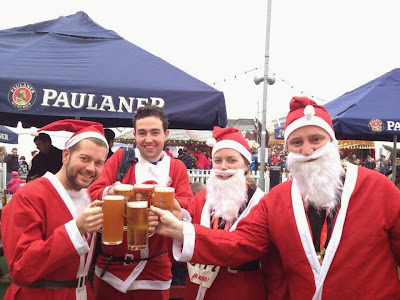 The Santa Dash was my first 10K since June. It most definitely won't be as long before my next 10K - The Fields of Athenry on December 26th. Ho ho ho!
10K Claddagh December Elaine Galway Gordon Outfit Salthill Santa Santa Dash Work