on March 02, 2014
The Kinvara Rock & Road yesterday marked the one year anniversary of my very first run, so I couldn't think of a better way to mark the occasion other than signing up and taking part this year. I decided to go for the Half Marathon this year though as it fell in with my Marathon Training Plan but I was sorry not to be able to re-run the 10K route.

Myself, Aisling and Gordon headed to Kinvara yesterday morning where, once we had registered just hung around near the start line taking in the atmosphere. As the race was sold out (1500 runners), the place was buzzing. I met everyone from my previous boss to people I worked with in Tesco over 10 years ago. There was such a great pre-race vibe down around Kinvara Pier you couldn't help but soak it up. 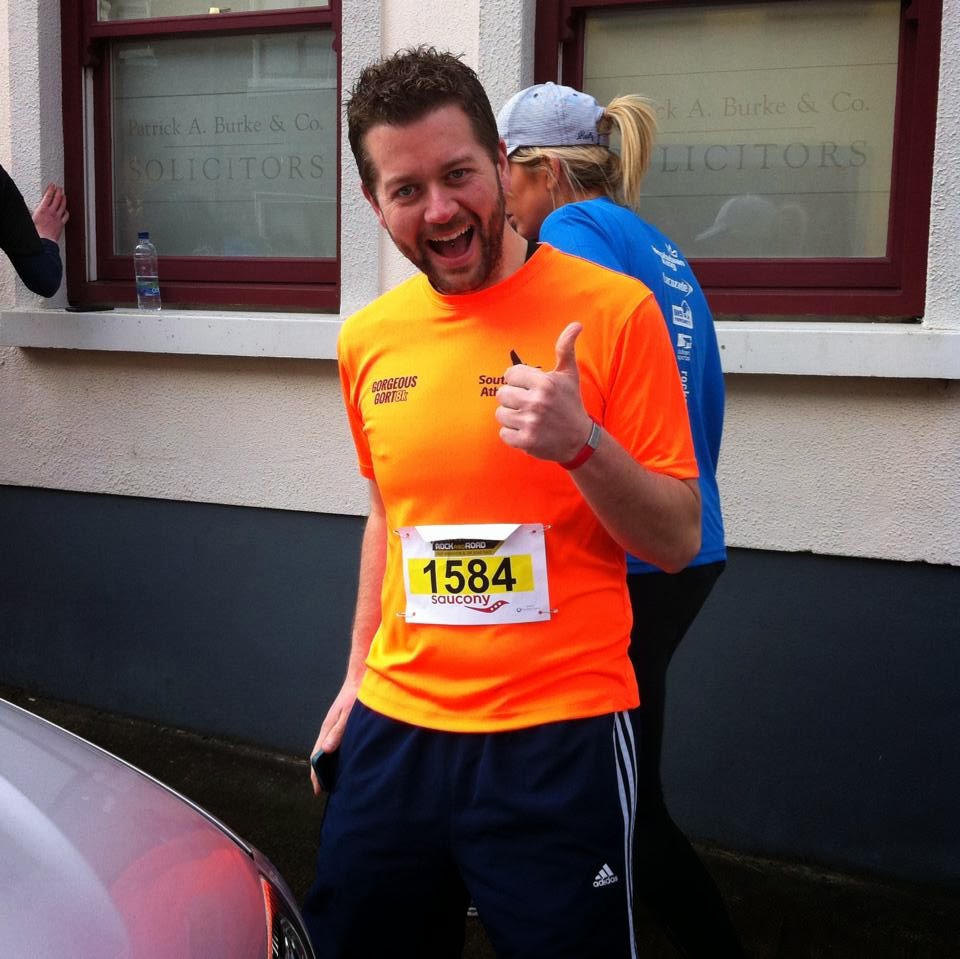 Me, ready to kick ass!

This was Aisling's first 10K race, so herself and Gordon lined up at the start line and bang on 12 noon, they were off. Everything seemed to move really quickly after that. They called the Half Marathoners into the same Starting Pit and within 5 minutes, we were ready for the off also. I had positioned myself in front of the 1:40 pacers. My previous PB for a Half Marathon was at The Flatline in Athlone last August. This was my first Half since then so I was aiming big and planning on knocking 5 minutes off my time. 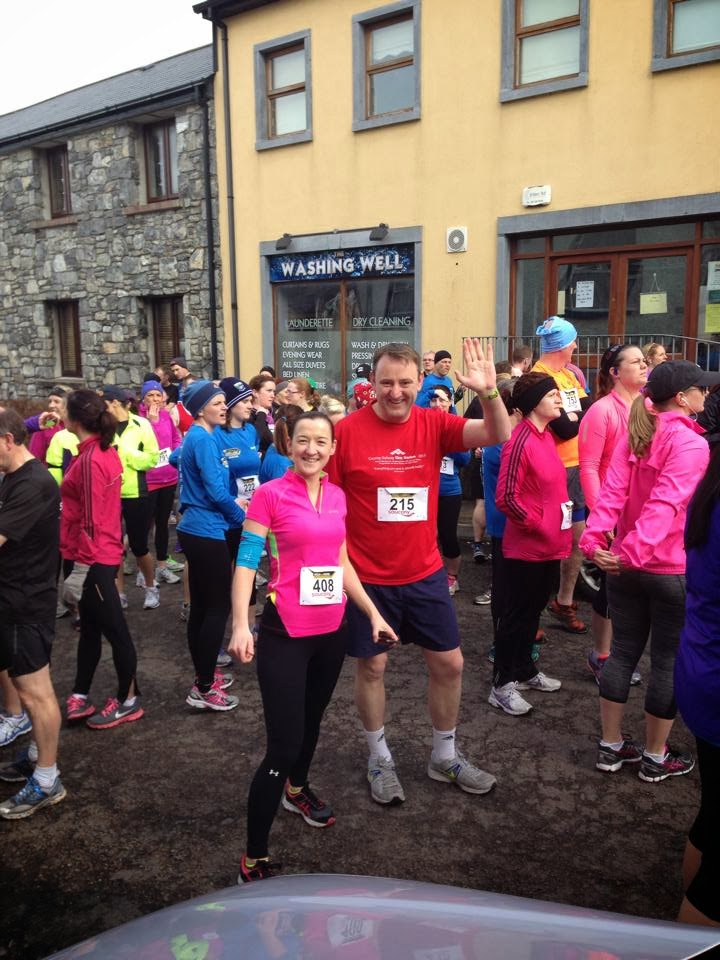 The Half Marathon started at 12:10pm and we took off around Kinvara before making our way out of the village heading towards the Burren along the Killina Road.I took off at a steady happy pace ahead of the 1:40 pacers and by the time I reached the 7K mark, I could hear the stampede of feet behind me. I took a quick look back and saw the pacers and a group of about 30 runners snapping right at my heels.

I pushed on but didn't want to burn out too quickly. We turned on to the New Line Road which has to have been one of the most amazing stretches of roads I've ever run on. It was the straightest road which made for difficult processing when you just turn on to it and can see runners ahead of you as far as the eye can see but regardless I trugged on. My times were coming in about 4m 40s per km which I knew was leaving me quite close to 1:40 pacers behind me.

As I passed the sign saying 'Half Way There', the pacers overtook me. Suddenly I was running in the middle of the pack and I found the restriction in space uncomfortable. I made the executive decision to fall behind, but only just a little, to let them run ahead of me. I kept them in my sights for the rest of the race. I was glad I did this to be honest.

As we took the last turn heading back to Kinvara, we passed a sign saying '6K' and I knew we were on the homestretch as we were back on the 10K. Its crazy how much of those last 4K I remembered from the year before. I knew there was a b***h of a hill coming up at the 7K mark (I was right), and I knew we'd turn back onto the main Ballyvaughan-Kinvara road around the 9K mark (which we did). 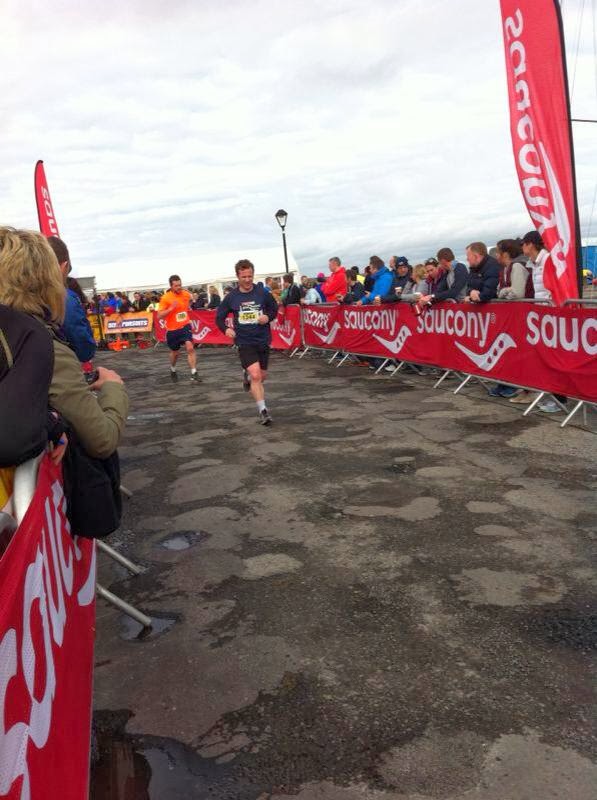 Sprint for the finish line

I crossed the finish line after my goal time of 1:40 but finished well ahead of my previous best so I was delighted! Aisling & Gordon were cheering me on for the side-line along with a friend of our Irene and Aisling's mum who had come to Kinvara to cheer her on for her first race. After taking a breather for a minute, myself and Aisling were happily chatting and hugging at the finish line. She had just finished her first 10K in under 55 minutes, I had beaten my Half PB. This guy comes up to us and hands both myself and Aisling a "spot prize" of a bottle of wine each as "we both looked really happy!". Hey, I'm not one to complain :) FREE WINE! 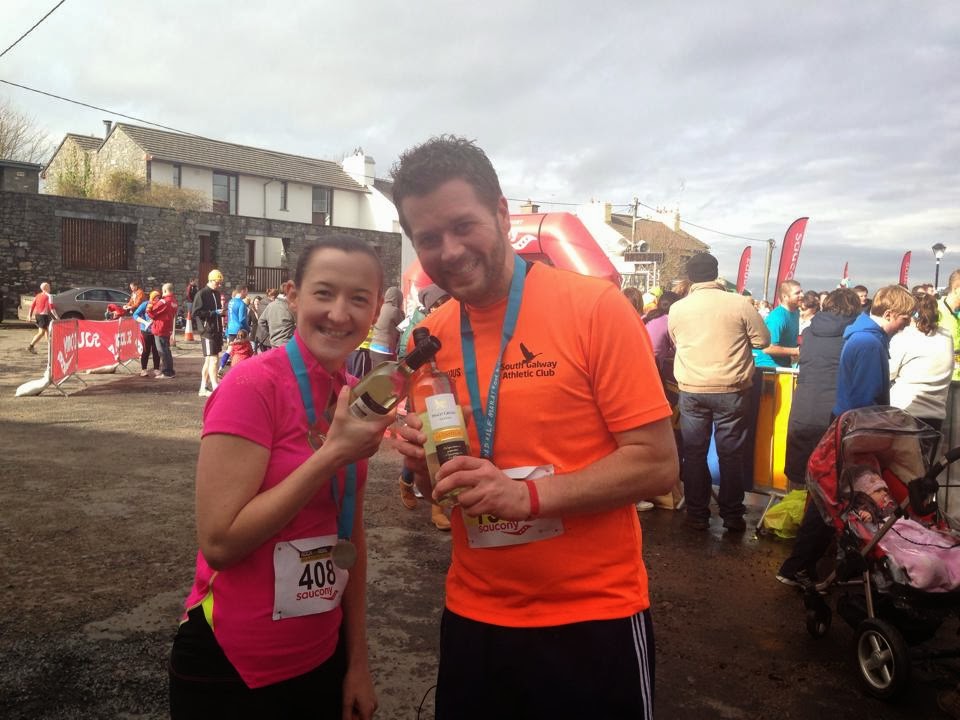 Myself, Gordon, Irene and Aisling headed to the local pub where we relaxed with a drink on the couch as we chatted about both the race and the developments on last night's Late Late Show (Linda Martin, put yourself away!). Feeling victorious after a brilliant day in Kinvara and a cool refreshing bottle of Bulmers in my belly, we headed back home to Galway with a new piece of silver-wear for the collection. 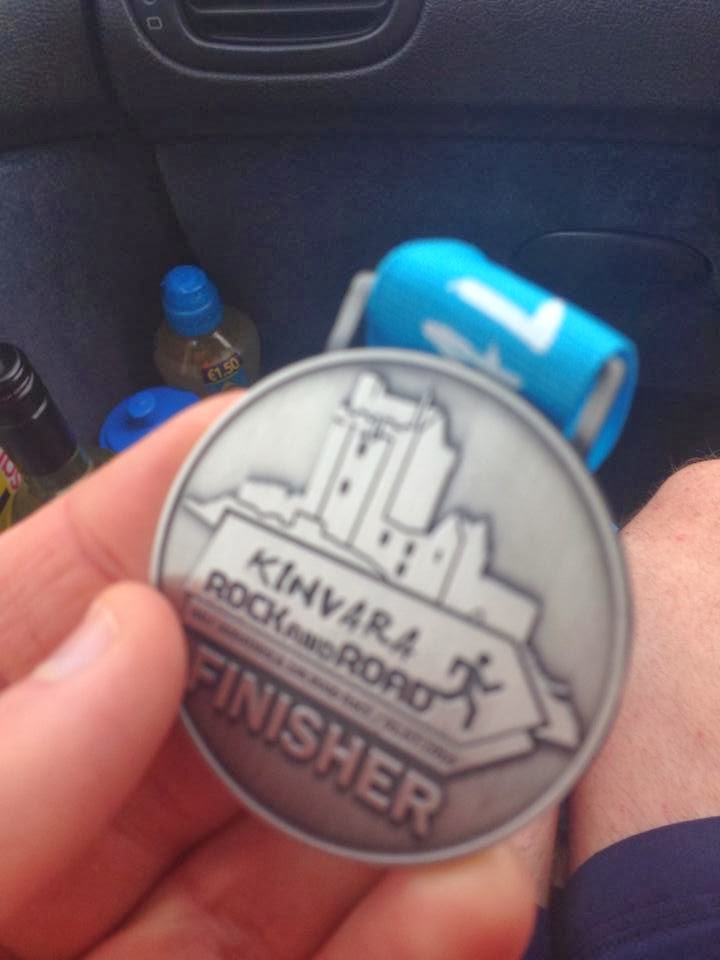