on March 16, 2014
I was quite excited for the Pakie Ryan 10K as it was my first 10K race since Athenry just after Christmas which left me 9s short of my Sub 45 minute 10K goal. I thought this would be just great to try push myself to smash my 45:09s PB. With the marathon only three weeks away, I'm conscious of the fact I will be ramping down in the coming few weeks so was looking forward to going hell for leather on this run.

Myself & Aisling headed to Newmarket-on-Fergus on Friday evening to pick up our race packs. Aisling was doubtful that she would be well enough to run as she has been suffering from a cold for the past few days, but she collected her bib regardless. I wouldn't normally be that organised that I'd pick up my pack early but we were on our way to the 9pm Fuerza Bruta show in Limerick on Friday night which is currently showing as part of the City of Culture line-up. The show was an Argentinian multi-sensory 360 degree spectacul-tastic performance. It was so different from anything else I had ever experienced. 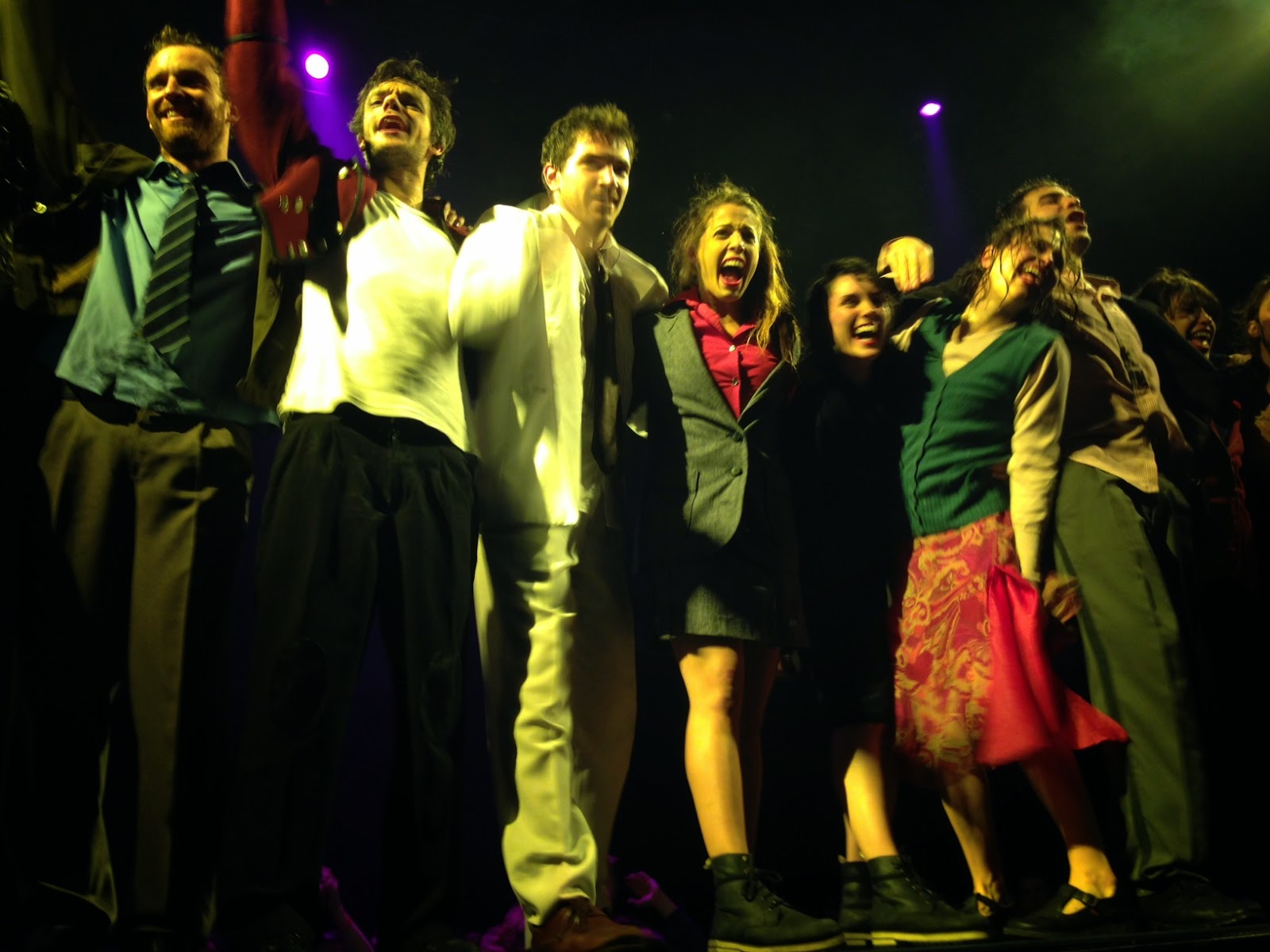 We left Limerick at 11pm Friday night soaked to the bone. I drove back to my parents house in Ennis with the sound of drums still ringing in my ears and in soaking wet jeans (No I didn't piss myself, you'll understand if you see the show). When I got home,  I showered and went to bed to catch as much zzz's as possible. Saturday morning was filled with a massive bowl of fruit-crammed porridge which has now become part of my pre-race tradition. It was also my dad's birthday so it was nice to be at home for that! Aisling made a miraculous recovery overnight and felt fighting fit and ready to run so at 10am we hit the road for Newmarket. 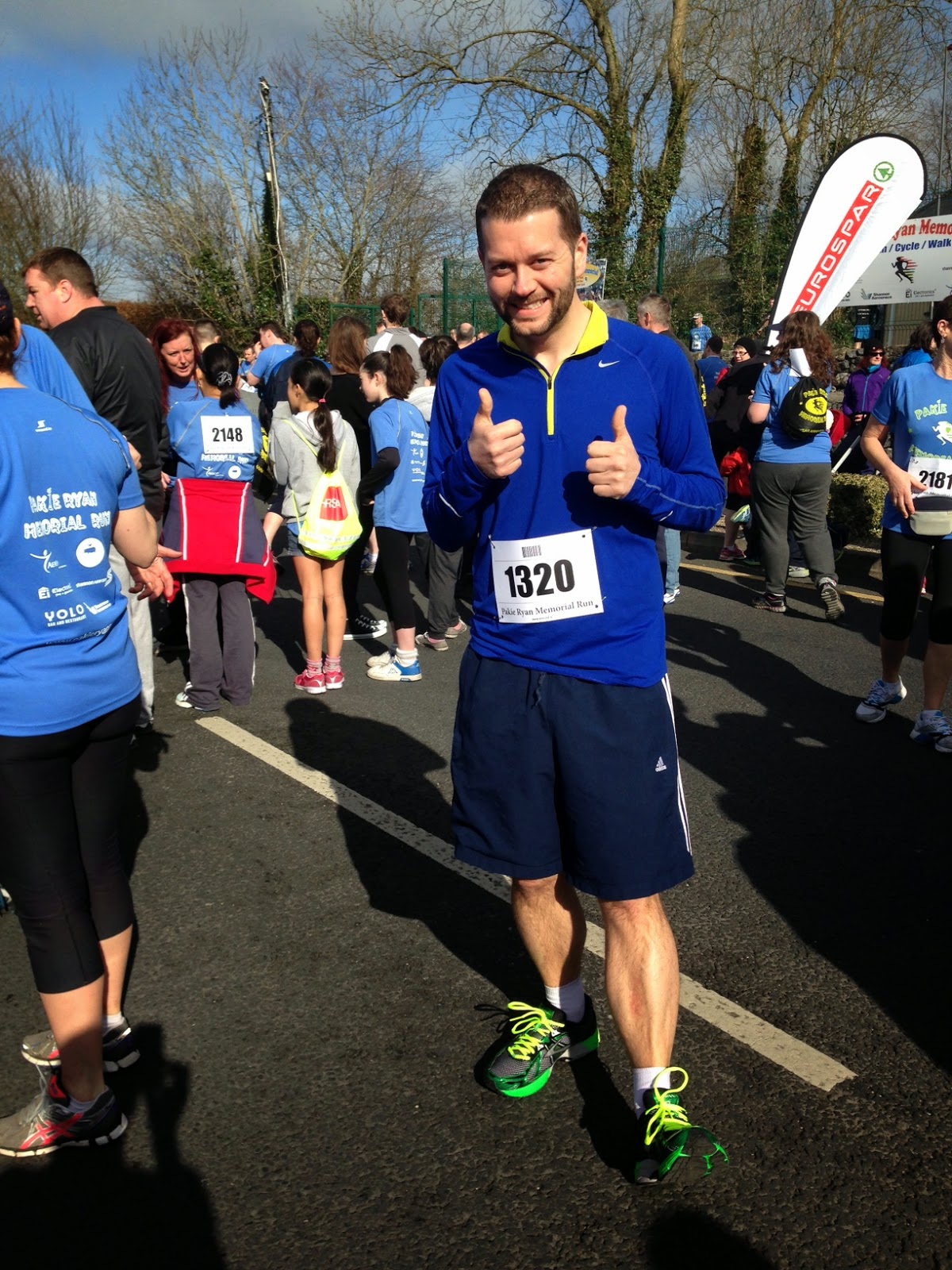 Myself and Aisling gathered at the start line with over 1000 others who were taking part in the 10 miler that was happening at the same time (same start/finish point - different route). I positioned myself behind the 45 minute balloon poised and ready for the gun. BANG we were off. (Here comes a mini rant: I just don't understand why walkers line up ahead of runners and then insist on walking four abreast! Rant over). I passed out the 45 minute pacer and hoped never to see him again (Sorry pacer!) 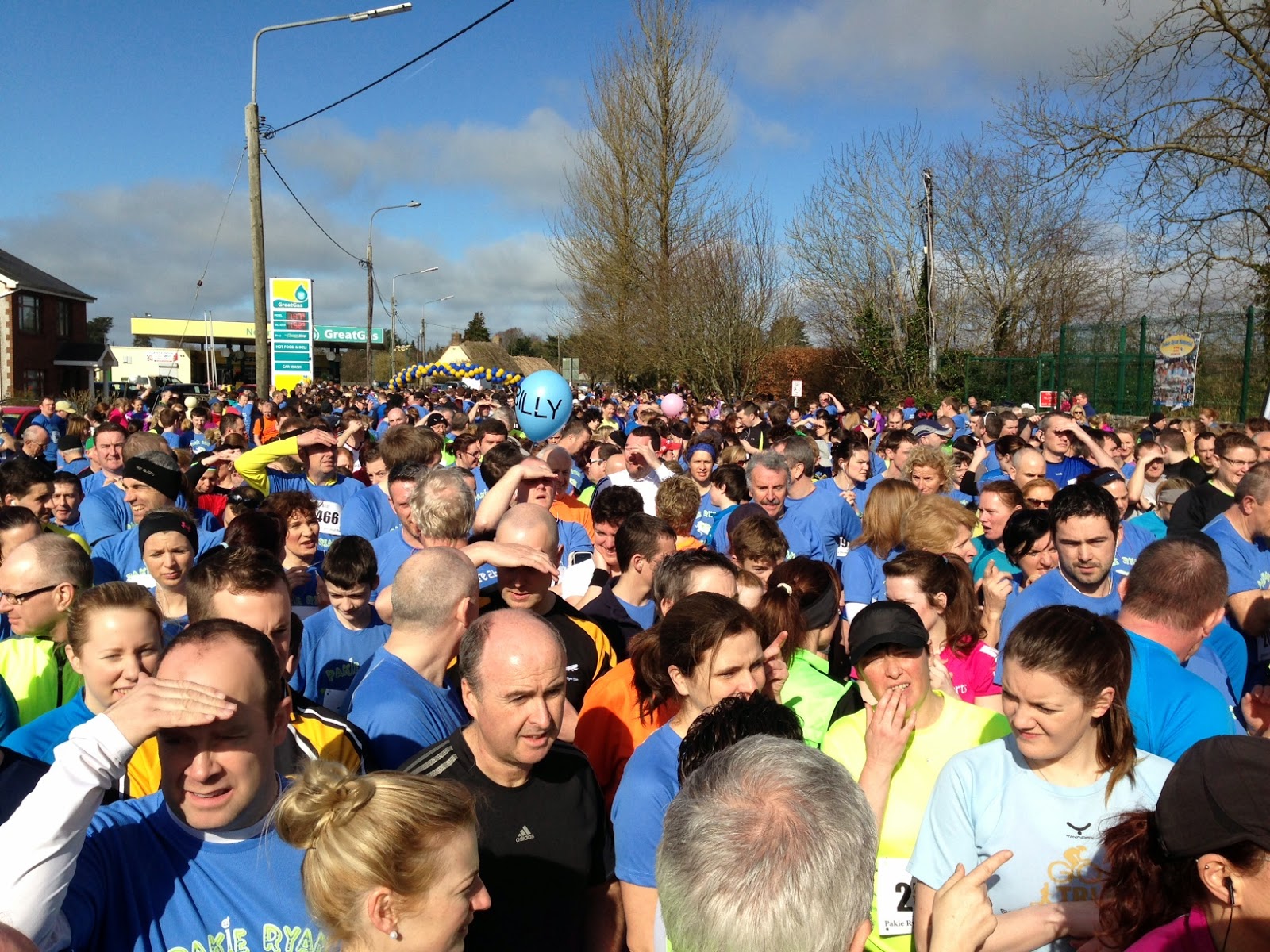 After scuttling around a few people as we ran through Newmarket on Fergus heading out the old road towards Shannon/Limerick, I found a steady pace and just kept on going. I had forgotten to pack my earphones so unfortunately had to run this race sans-music. It's been so long since I have run without music in a race, I found the sound of my own breathing quite unnerving. I felt like I was in the middle of tense horror movie. If anyone has Wes Craven's phone number, will ye let him know I am available to voice overs?!

At the 3KM mark, the 10 mile runners split from us and the route became more interspersed which made for easier running. The sun was out in force and my eyes started to sting with the salty swear falling from my forehead. It's been so long since I've run in proper sun, I felt a bit like a bear post hibernation. Running without headphones gave me an appreciation for the support runners give to other runners as you trek around a course. People were nudging each other on and would ask if others were ok as the passed them out. It was really nice to see.

I kept going, head focused on breaking my 45 minute barrier. I hadn't seen the 40 minute pacer since the beginning and seen as the 45 minute pacer hadn't passed me, I was hopeful... that was until we reached the 8KM marker and the road in front just seems to endlessly incline. I'm kind of glad I didn't know there was a hill at 8KM - I'm also glad I didn't know once I got to the top of it, there was another one as I think it would have killed my 45 minute dream.

As I approached the village, I heard someone shout "Go ON 500m left" and it really nudged me on in the right direction. With great gusto, I plowed straight for the finish line. About 200m from the finish line I could see the clock edge close to 44 minutes. I crossed the line after 44 minutes but before the 45 minute pacer meaning I'd smashed the Sub 45 Barrier and given myself a new PB on what was quite a hilly tough course.

My official time is 44:27 (although I suspect if the event had been chipped, I could knock another 20s off that!). Either way, I'm delighted. I've raised the bar slightly and set myself a new time to beat when I run in the Eamon Maloney 10K in Ennis in two weeks time. Overall I finished 57th out of the 716 who crossed the finish line. 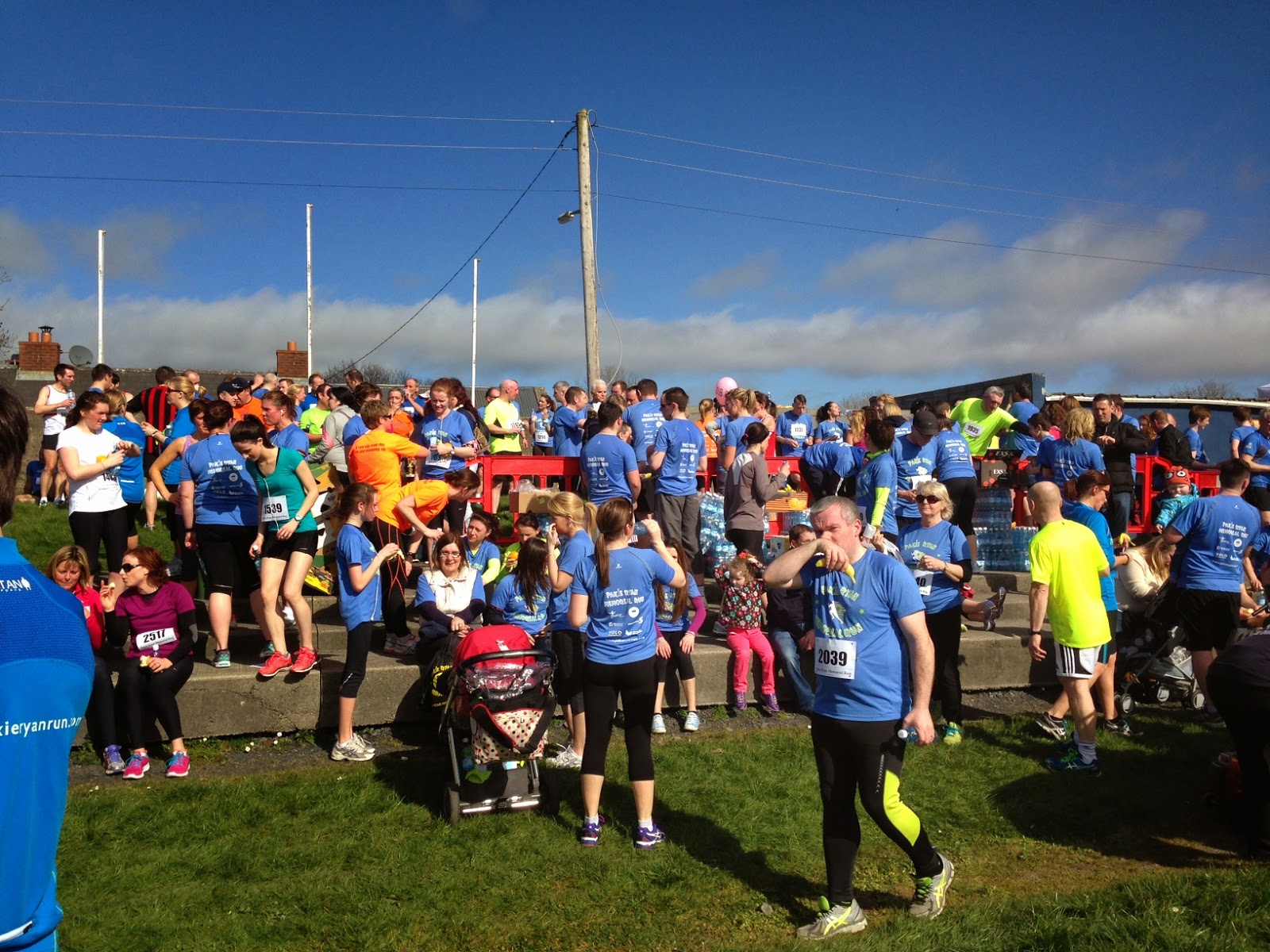 After the race, we were funnelled into the Sports Ground where there was a huge marquee filled with fruit, water, sandwiches, tea etc. I had a few minutes to recover before I spotted Sean from Amphibian King (who was the 50 min pacer) and we had a great chat before Aisling sauntered in cool as a breeze. For one who was sick the past few days, she certainly knocked out her second ever 10K without bother.

All in all, it was a great event around a tough hill-ridden course with the sun shining down on us but I really enjoyed it! 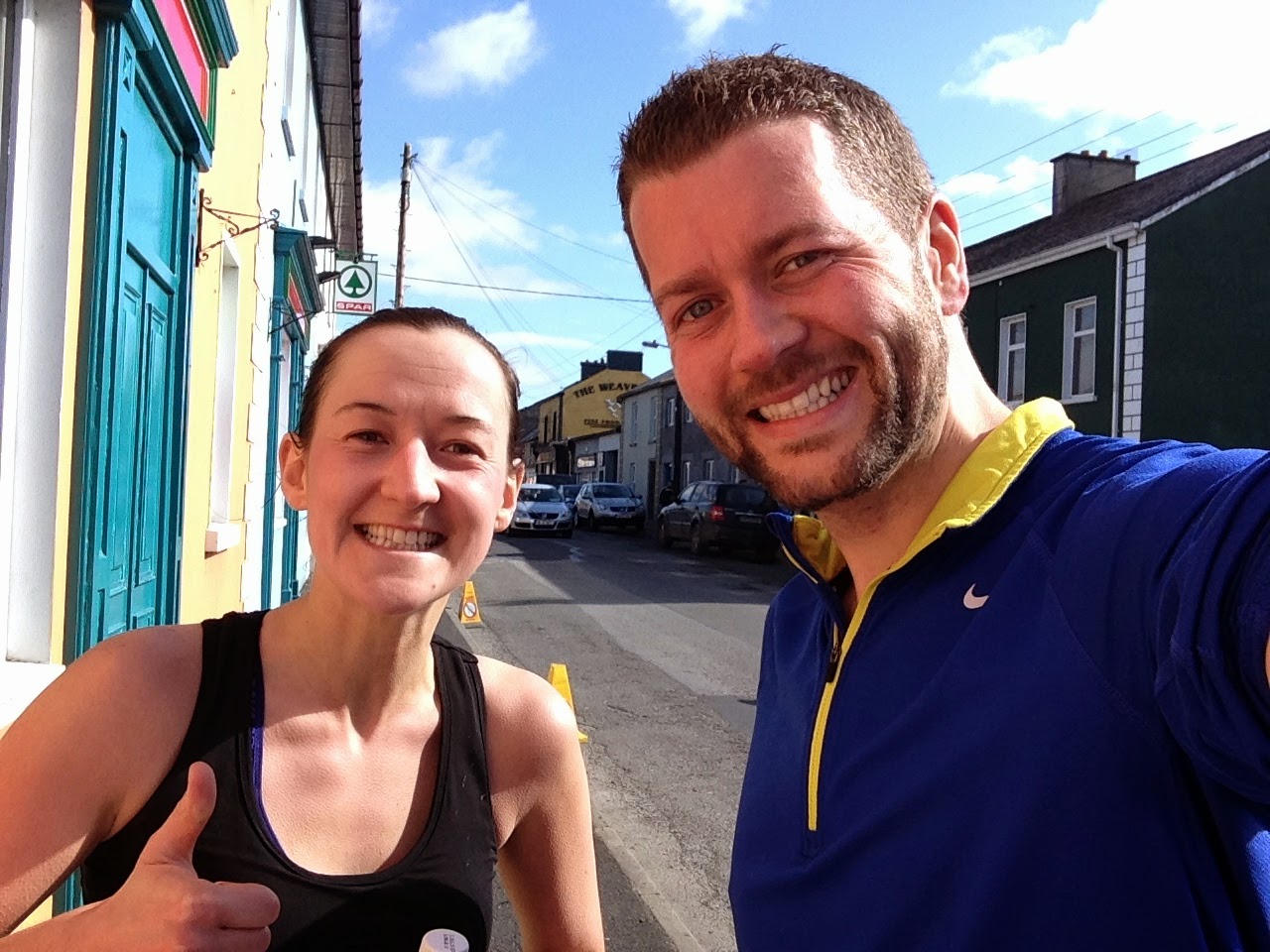