on May 06, 2014
This was the unexpected Half Marathon, one I hadn't planned on even entering but last weekend, Sean from Amphibian King contacted me to offer me a place. How could I resist? Running (especially races) have become like a juicy dangling chocolate dipped carrot! I jumped at the offer and signed up on Monday for entry in the Half Marathon. It has been 4 weeks since the Connemarathon and while I've still been running, I haven't run further than 6K in the past 4 weeks. I've changed focus to cycling but can't seem to shift the running bug. 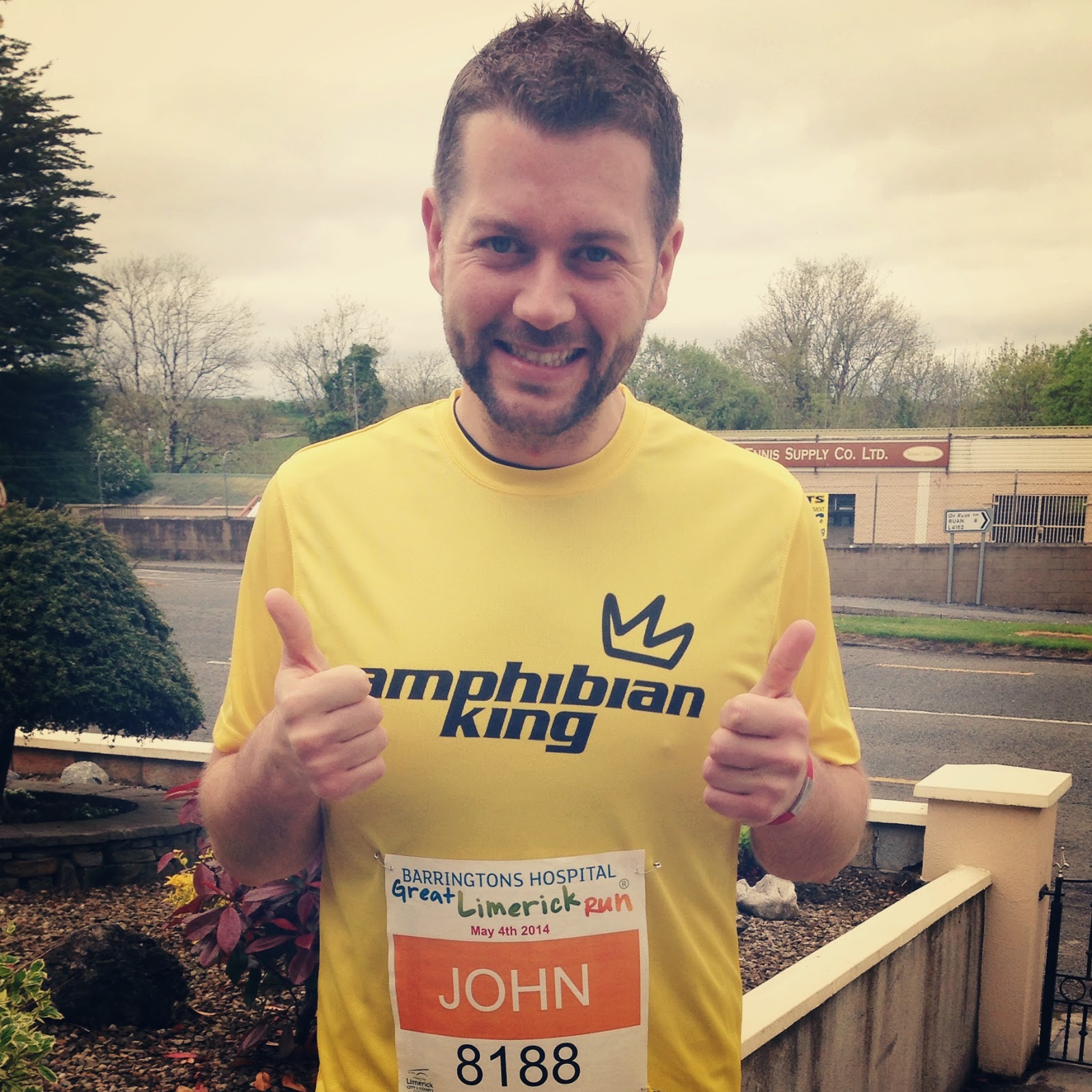 I spent Saturday in Limerick, but it was late (5pm) by the time I got out to UL to the GLR Expo. It was quite disappointing leave with no t-shirt though, as after I had collected my race bib we found out there was only XL T-shirts left so I didn't take one (what was the point?). On Sunday morning, I got ready and my Mam kindly offered to drop me in to Limerick which just removed the 'Where the hell am I going to park?' gout I normally go though before a race. 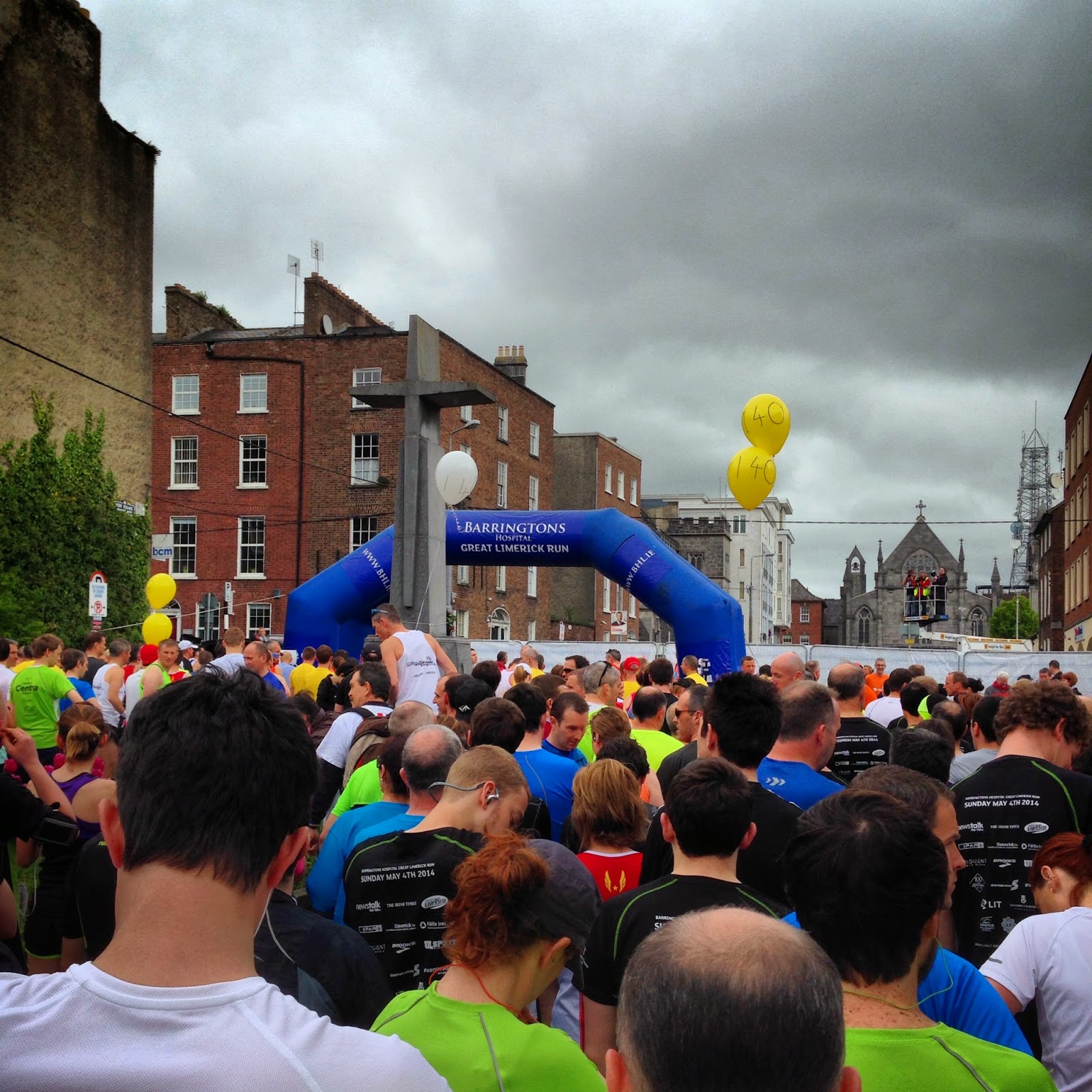 I made my way to the start line near Peoples Park with over half an hour to spare. I used the time to warm up with a couple of laps around the park incorporating a few stretches. As soon as the pacers appeared, I made my way up near the start line along with the 1800 other runners taking part in the half marathon which was scheduled to start at 11:45. The sky was ominously grey all morning and looked like it was planning on bucketing on us as soon as the race started. At 11:45 on the nose, the gun fired and we were off... 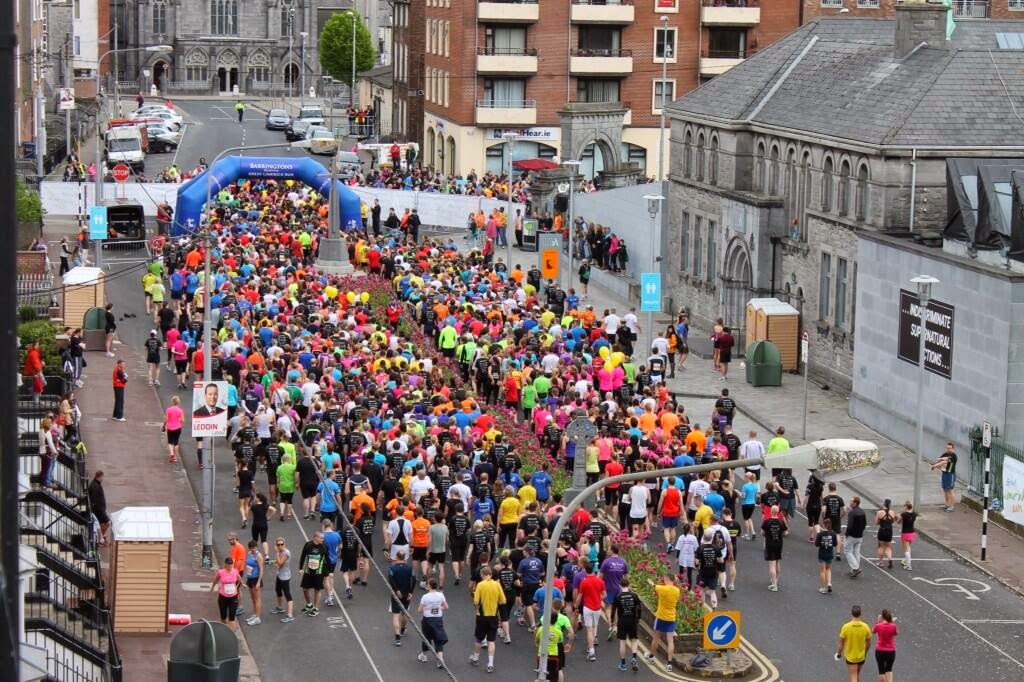 It took the first 2km's for me to find my 'personal space' in the crowd. The route was littered with cones which made navigation in the crowd difficult but once I had found my own pace and space, the crowd carried me for the first part of the race. I always find running large races on my own strange as I never have a landmark to anchor myself against when imagining where friends are in the same race (e.g. Philip would have passed here 10 minutes ago).

The first half passed without much incident. I maintained a steady 4:45/km pace and had the 1:40 pacers in my sights the whole time. My previous HM best was 1:41 in Kinvara and for this race, I didn't feel as prepared so wasn't ready mentally to put myself ahead of them. I do believe this actually worked to my advantage for this race as I always had their balloons within my sights.

The run brought me around all the landmarks from Limerick I am so used to but had never connected the paths between. From Peoples Park to the Hospital, passed The Crescent Shopping Centre and back into the City Centre. It was weird to be so close to the finish line (on O'Connell St) and yet only half way around the course. That being said, it was such a boost to run with crowds cheering you on from the sides! As I passed the 12K mark, I was papped by one of the Amphibian King photographers (she must have recognised my shirt!) 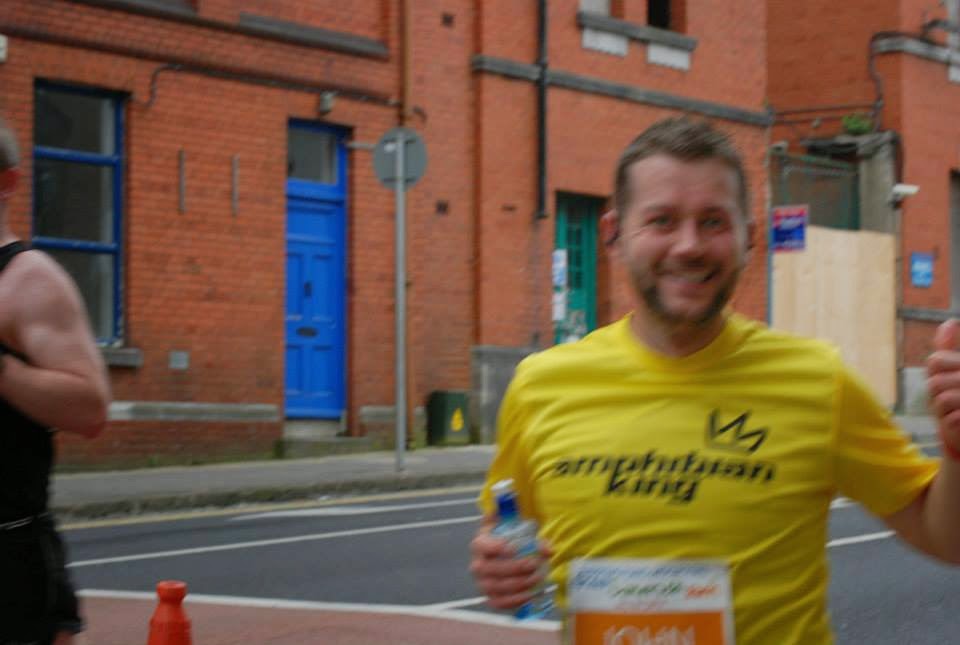 The course continued down by the river before circling back over the main bridge and away from the city (Ennis Rd). I think this was my favourite part of the entire race because of the barrier separating you heading outbound with runners coming in to finish the race. We (Half Marathoners) were wearing Orange Bibs while the Full Marathoners had Blue. The Full Marathon started at 9am. My Nike App informed me I had crossed 13K at the 1 hour mark, so I knew these guys heading in towards the finish were about to cross the finish line at 3:45-3:50 which I would hope would be my time had I run it.

The half route brought us around in sight of King John's Castle before we headed up towards Thomond Park before we turned left into housing estates near St. Camillus's. It was around here (15K), I passed John L who was running the Marathon. I gave him a quick few words of encouragement as I've been there. That was another interesting part of this run. In Connemara, the Marathon runners met the Half runners and I found it so tough to keep on running while lots of Halfers were overtaking me. Its hard to know if you are better off with everyone in the same boat or having some new fresher blood come along to motivate you along.

The route continued along the Ennis Rd back towards the city before turning right in and around some more estates. The footpaths were lined with kids, parents and friends of runners holding signs and bowls of jellies. It was really fantastic to see and a huge motivator when all you want to do is stop or slow down. As I passed the 20K mark, I realised how important a crowd is for the experience of any race. I don't know if they really know how much their presence on the side of the street means but sometimes even just making eye contact with someone clapping makes it feel like its for you and pushes you on that little bit more.

I had 1K to go and my clock was reading 1:35 so I knew if I dug deep, I could pass the finish line with a new Personal Best. The last kilometre brought me back up over the bridge we passed at 13K. The 6 mile hadn't started yet so the bridge was pretty empty as I ran towards O'Connell St. I could feel my legs ramp up for a strong finish as I turned onto the final stretch and could see the clock read 1:40 in the distance.

I crossed the line at 1:41:02 - giving me an official chip time of 1:40:32, knocking over a minute off my Kinvara Half time! For a race I started not feeling too prepared for, it was my new Half best. Delighted with myself, I made my way through the banana & water stands and out the other side where I got to watch the 10,000 6-milers start their run. 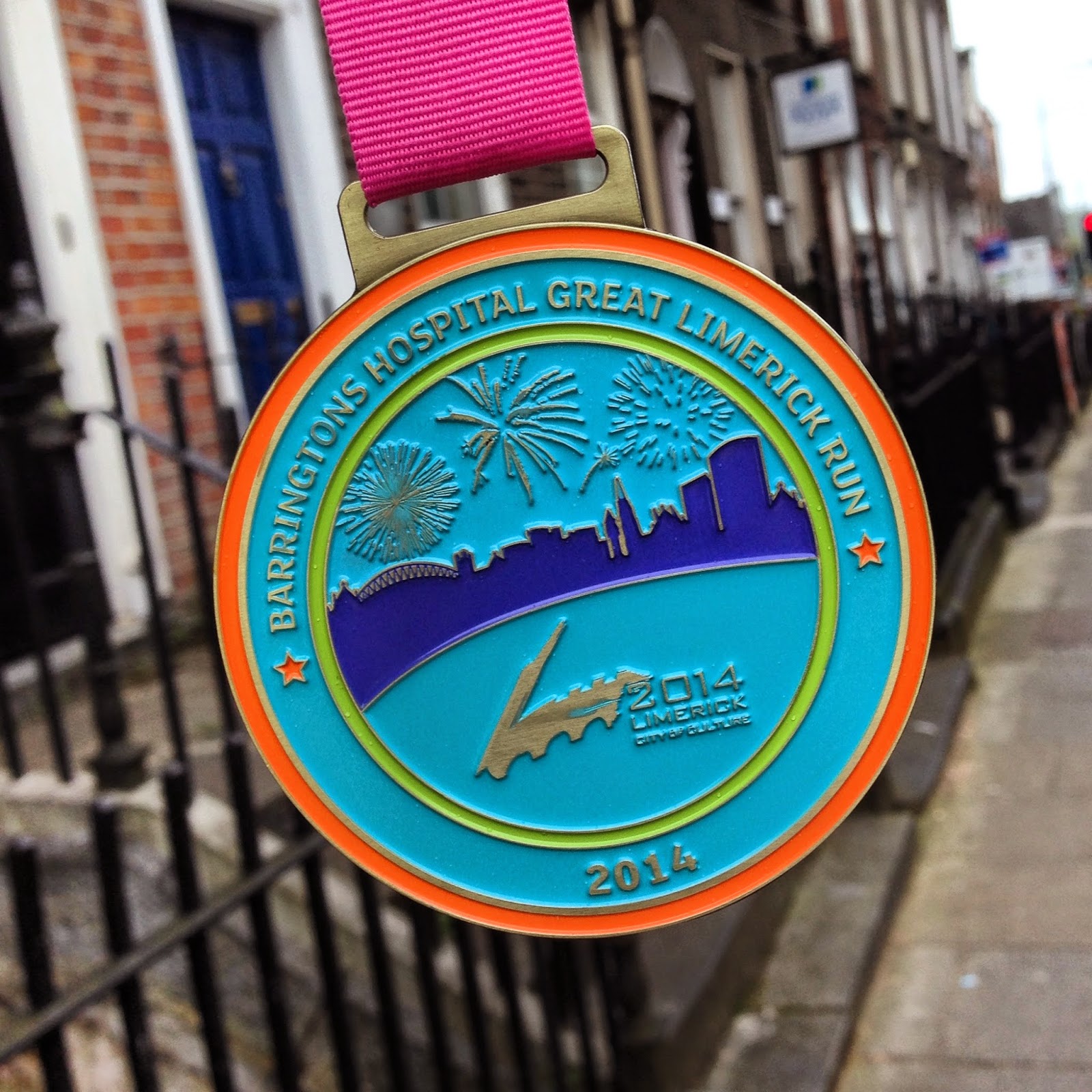 All in all, what a run! The Great Limerick Run really surprised me! I went into it with an extremely neutral attitude, not too bothered with the outcome of the race. This is what I have learned from this race: Don't surrender your accomplishments to your inner beliefs. What I mean by that is: If I had finished this in 2:00 hours, I'd have put it down to the fact I hadn't been training for the past month. What I do find incredible is the fact I could just turn up WITHOUT proper planning and not only run a half marathon, but PB it!

I feel like I really want to shift up a gear and actually start doing speed work and interval sessions to work on my speed however I have already committed myself to giving cycling the next twelve week block to focus on for the Ring of Kerry so I'll stick with that like I promised myself. Limerick, you were awesome!