on May 25, 2014
Friday, the day before my first cycle actually turned out to be quite the learning experience. I realised how truly underprepared I was. I didn't know how to change a flat tyre, I didn't have a water bottle or a water bottle cage on my bike. I didn't own proper racing stuff. Following a quick panic attack, two of my cyclist buddies (Thanks Marty & Ger) came to the rescue and gave me loads of advice. I ended up dropping a small fortune in Halfords but left with a mini-pump, 5 tubes, a saddle bag, tyre levers and a puncture repair kit. A guy from work had an unused cycle kit in my size so I got myself some free proper cycle clothes too.

My alarm went off at 7am Saturday morning and I loaded up the car and headed for Clifden. I had my bananas, energy bars, water, phone case, water bottle, pump, helmet, gloves and most importantly my bike packed in the car. This cycling malark really is a lot of work. I arrived just before 9am and got parked in the mart on the outskirts of the town. This turned out to be one of the best moves of the day as I met Caitriona (a girl from work) who gave my bike a quick look over before I headed up to the start line. 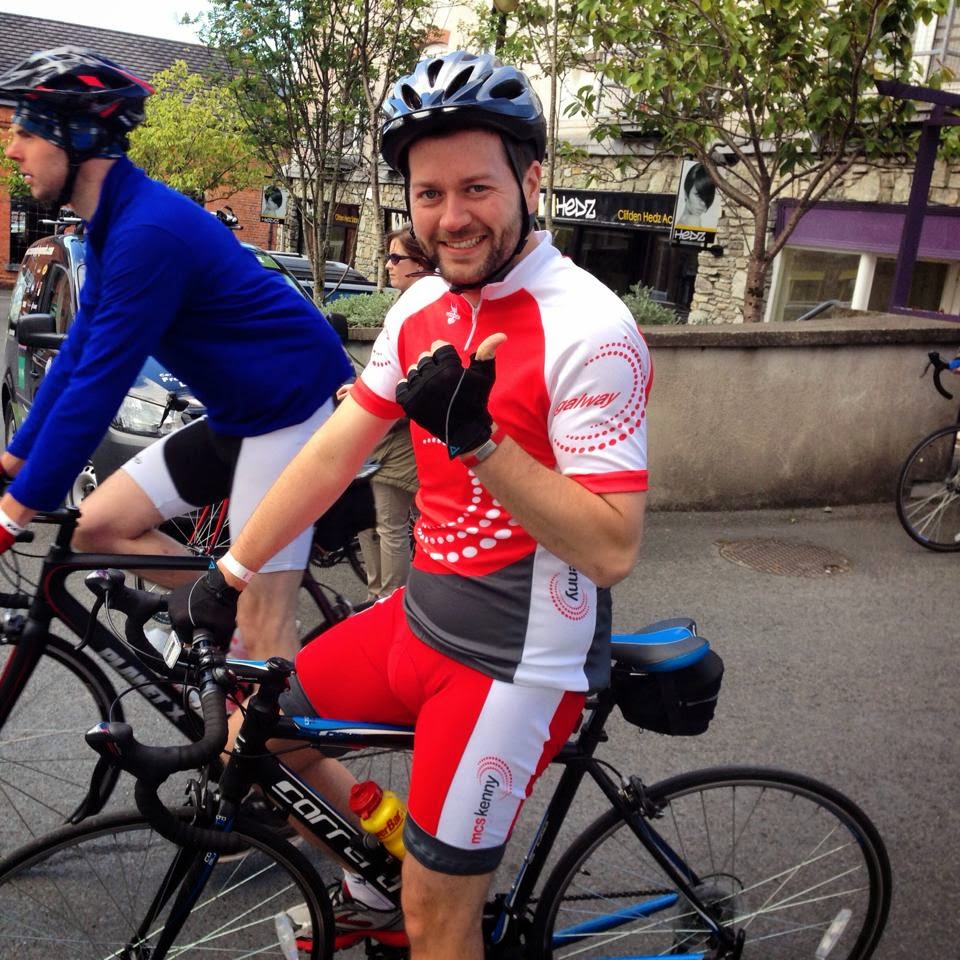 Ready to kick some ass!

The 140KM guys headed off at 9:30am leaving a much smaller crowd behind for the 10am 80K route. I took the half an hour to pee (I always get pre-race fake full bladder) and double check everything was ready for the race. I met Caitriona again at the start line but lost her as soon as the whistle blew and we were off. The first few km were quite slow as the sheer volume of bikes on the road. I had lost Caitriona at the beginning and thought I might catch up with her but its so hard to pick out cyclists from behind so I just keep trucking soaking everything in. 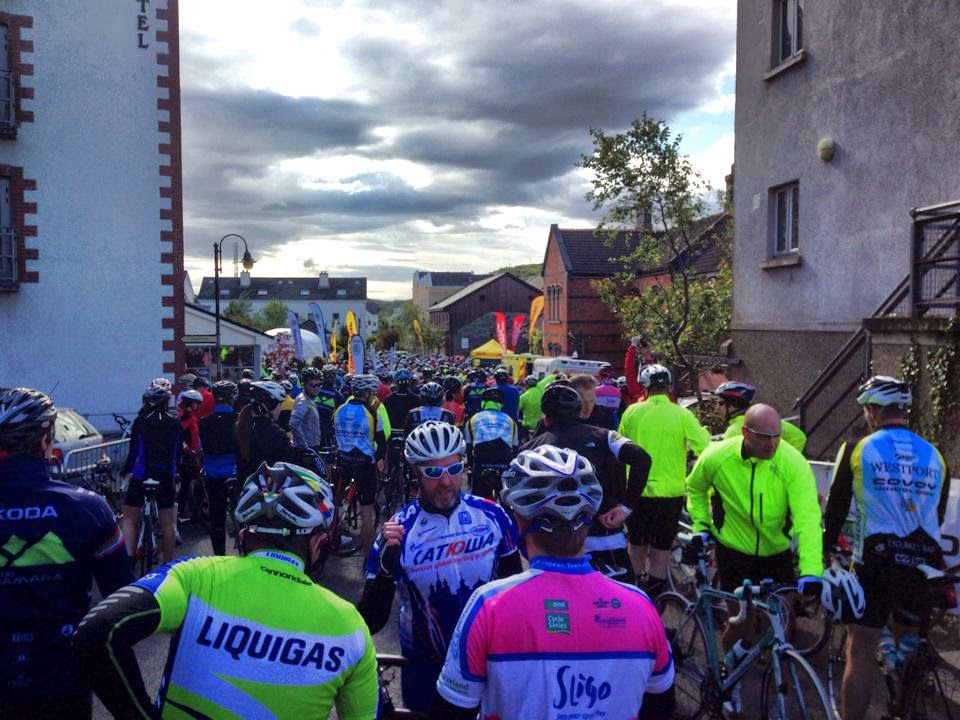 The route took us out of Clifden, through Ballyconneely and Roundstone before hitting the Food Stop 35km in at Cashel. The whole thing was completely unlike anything I had expected. There was no rush or panic in anyone. This was the hardest part of the whole day to get my head around. I kept having to tell myself 'This isn't a race, its a cycle'. As I hit the stop, I bumped into Caitriona which was brilliant. We joined the food queue and once inside, got sandwiches, cake, tea/coffee and water. It was exactly what the doctor ordered. 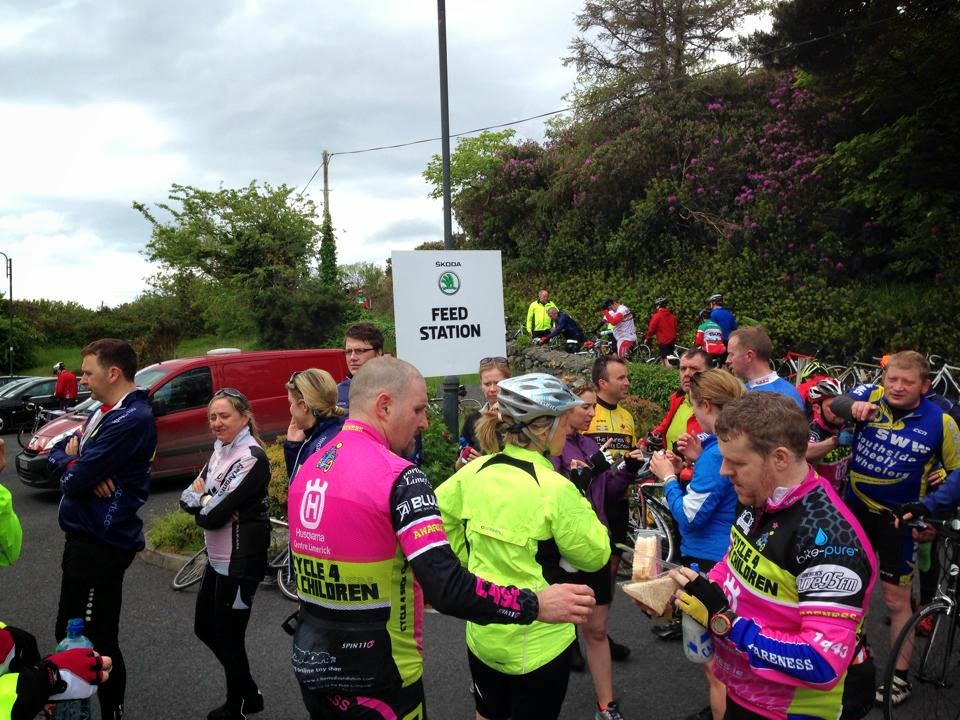 Outside people were chatting, checking their tyres, taking photos. It was such a different experience to what I had in mind of a water station mid run. We were back on our bikes and myself and Caitriona cycled the remaining distance either beside or in front/behind eachother. The route continued back onto the main Galway - Clifden road before we turned left onto the Lough Inagh road through Connemara. 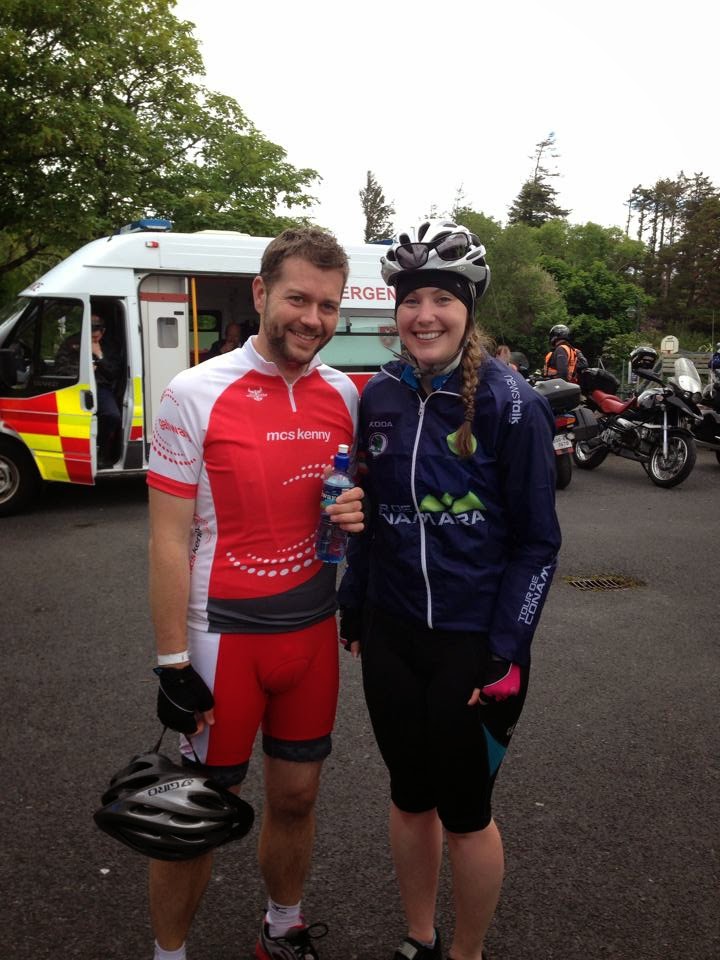 Myself & Caitriona having a pit stop

This is the road the Connemarathon started on so it brought back a mix of emotions cycling along the road this time. It was funny passing the spray painted signs on the side of the road making each mile out and it was at this point I realised the main difference between cycling and running. Now, this may sound trivial to everyone reading this but it was only at this moment did it strike me... You cannot progress a single step forward in a race without spending energy. Each footstep doesn't just happen - on a bike its so different. You can adjust speed according to your energy levels, change gears to reduce exerting effort, you can coast when going downhill. Running is simple: One foot in front of the other repeated.

What was incredible about cycling is that I felt I could take in more. I could appreciate the wonderful countryside we were cycling through. I could see the sun breaking through the clouds casting different colours across the roaming hills and mountains as we sped through Connemara. When we got to the top of the road (10K into the Marathon route, 60K into the cycle), we took a left towards Letterfrack. There was a nice PowerBar refresh tent 65KM. We stopped for a quick drink before hopping back on our bikes to tackle the remainder of the journey. 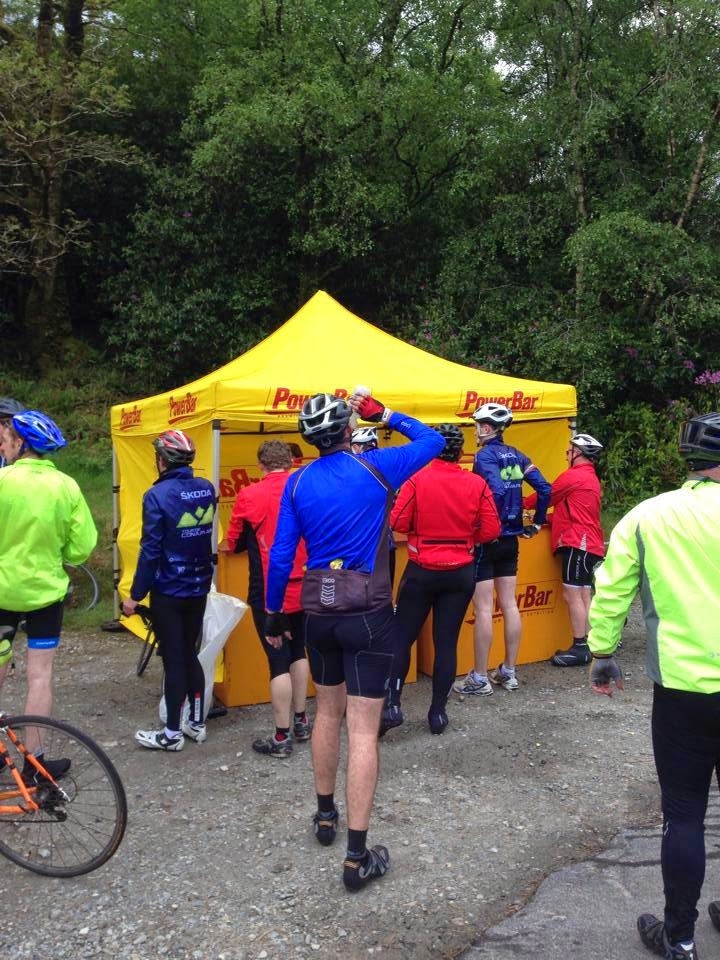 I had known there were two large hills near the end of the cycle but had completely forgotten about them until we were pulling out from the PowerBar tent when Caitriona said 'Just these hills now and we'll be home'. I didn't know what to expect as I'd only ever driven this road once before and couldn't remember any hills. As we cycled towards Letterfrack, one of the motorbike marshals pulled up alongside me and we chatted for a few minutes before he scooted off to help two people at the side of the road.

The first hill was tough but short... and the downhill ride afterwards made it so worth the climb in the first place. This is what I mean about the main difference between running and cycling. Once we had the effort put in going uphill, I reckon I travelled over a km downhill without peddling once. In fact, looking at my Strava, I sped downhill at 56.9km/h - that is insane!

Once I passed the 5KM to go sign, I knew it was plain sailing back in Clifden. People chatted while they cycled towards the finish line, I could hear people clap and laugh on their bikes behind me and in front of me for the last few kilometres which was lovely. There was a real sense of collective achievement/experience - this is another huge difference between cycling and running. Its rare that I've finish a race and felt like collectively all of us had achieved something (the Dublin Marathon being the only exception). 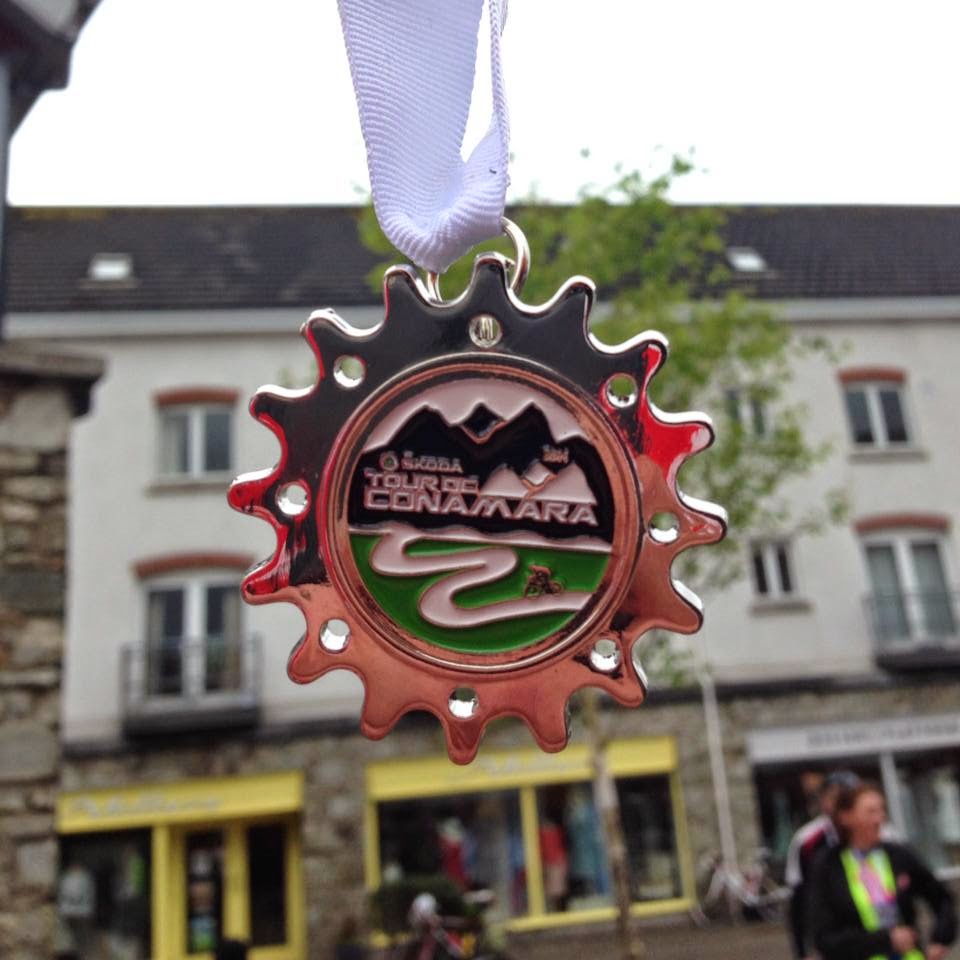 I crossed the line and my Strava was stopped at 3 hours 50 minutes. (There was no clock). We collected our medals and I watched for a while as people applauded others crossing the finish line, people hugged and cheered, people had their photos taken on the podium all while music blared from speakers into the post race finish area. Luckily Caitriona had brought some money with her (I have a list of things to do for the next cycle which I'll publish later in the week, but not having money when you finish really was stupid!). We went around to the BBQ area and Caitriona bought me a burger which certainly helped my recovery! 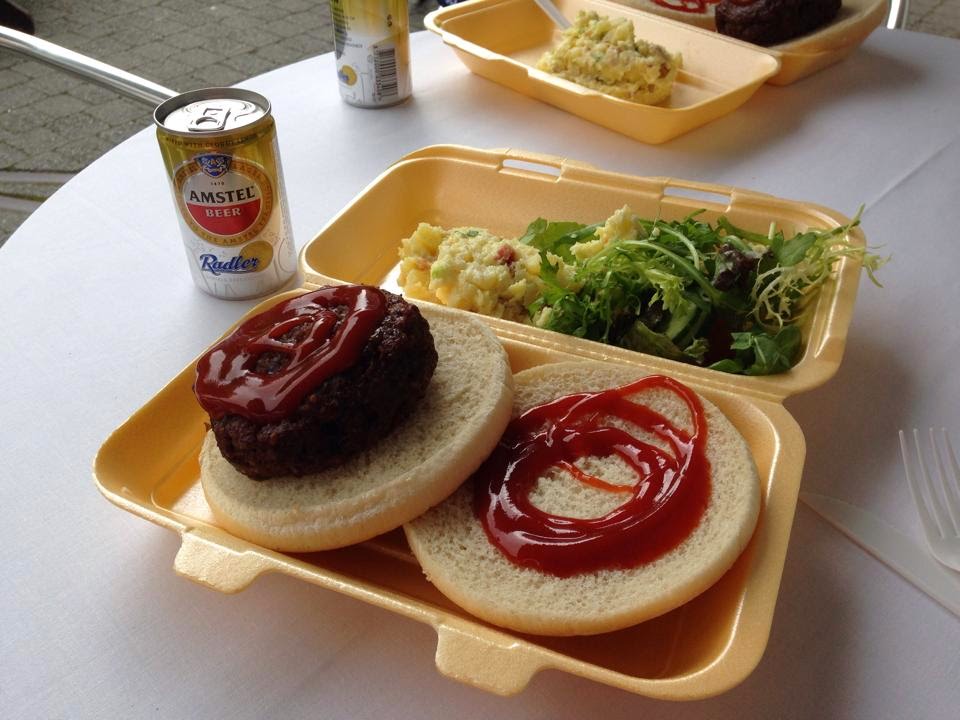 First cycle done and dusted. I've learned loads, was thankful I didn't get a flat and really enjoyed the day. Getting into my car to drive home I had a big smile on my face, I'd surprised myself again. Today I cycled the furthest I'd ever cycled in my entire life, it was awesome and I'm actually looking forward to pushing myself further. The Ring of Kerry is only 6 weeks away. 180km is a hell of a jump from 80km so I really need to get out on the road more and get more hours practice in. Having experienced my first cycle though has made me even more confident that I can do the Ring of Kerry as the cyclists of Connemara have shown me... cycling is more about the entire journey to the finish line than just crossing it, more about the the people and the camaraderie than the competition.
Bike Caitriona Cashel Clifden Connemara Cycle Cycling Finish Food Stop Hills Letterfrack Mountains PowerBar Roundstone Running Tour de Connemara