on May 16, 2014
This is a Galway 5K race report from the other side of the race line! It was Maree's debut as part of the Galway 5K series so I offered my services to volunteer at the race. (Now while that may sound really honourable, it wasn't really... each week, the host club is responsible for their race and I've had such a super time at other races without paying the helpers much heed so fair dues - it was my turn to pay back). 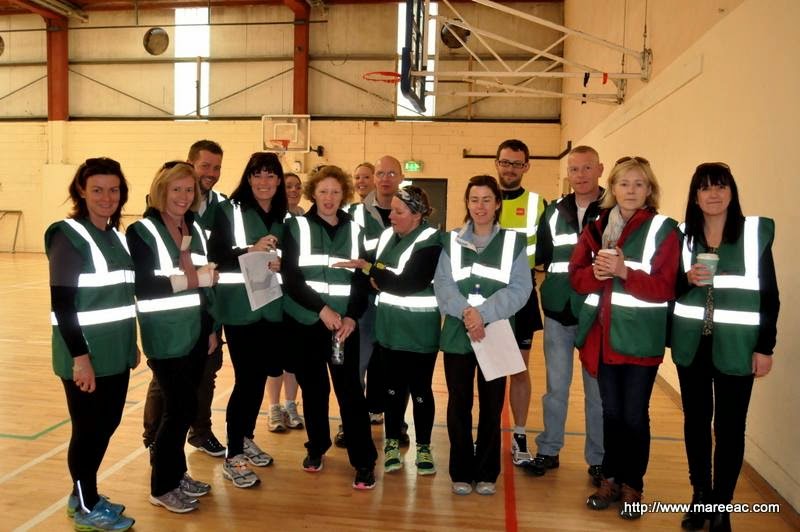 
At our pre-race meeting, Catherine (The Club Chair) was looking for someone to kick off the race. Before I knew it, I ended up with the megaphone in my hand taking notes on what I had to say. The 23 marshals had all been given their posts and responsibilities. Phil was cycling, leading the race which is also a pretty awesome job while Sharon was stuck behind her camera as Maree are only club out there taking photos at each race, so I actually think her job was the most important :) 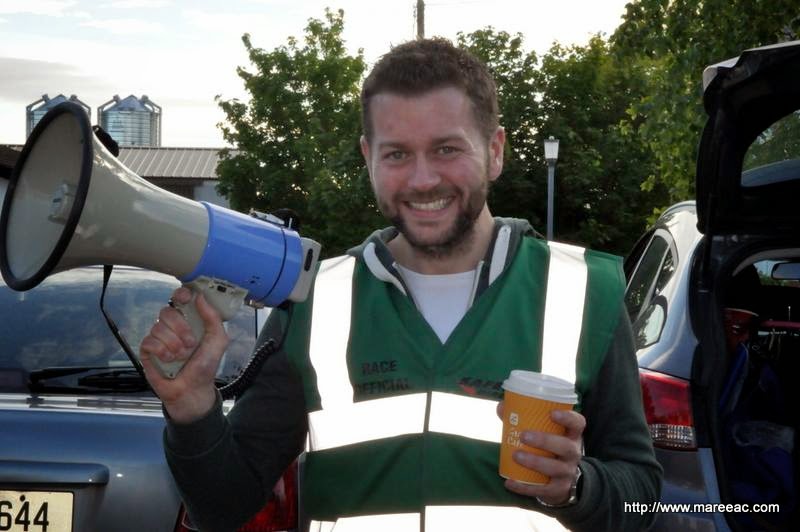 As I was just waiting around for the start, I got to do lots of different things like talk to other runners prepping for the start. The most interesting conversation I had was with the guy who is responsible for the chip times. He told me the advantages of each different chip along with how they work. I'm such a numpty, I had no idea... Well, I'd never given it much thought!

I have to admit, the least pleasant part of the whole experience is watching and directing traffic. I only know because I helped distribute leaflets in the local area but sweet jesus some people are really ignorant when it comes to their cars. First off, about 90s before the start of the race, all 650 runners were lined up at the start line and this woman in her car just wouldn't take 'Wait 5 minutes PLEASE' and just plowed through the start line. It was her poor son in the back I felt more sorry for hanging his head in shame as the drove through like a bull in a crowded china shop.

I'd never started a race before so was quite excited to get the chance. Part of me wondered how my rendition of Beyonce's "End of Time" would have gone down but I decided to stick with tradition. The timing guy gave me the nod so I started counting down... 10, 9, 8... A few of the runners at the front pointed out two girls further down the road with their bibs on running towards us (clearly late for the start). I asked 'Should I wait?' and the general consensus from the front of the crew was 'Wait'. As the girls approached, they got a huge round of applause. I counted 3... 2... 1...

I couldn't believe how long it took for everyone to take off. Standing at the start line, I watched everyone cross over the line and then... nothing! I had my hard work done for the day so now we just waited. It was around 10 minutes later when a car approached we realised we had no traffic marshal BEHIND the start line.

I was free so jumped into action and manned the junction behind the start line. In all fairness, most of the cars we fine with the fact they were either going to have to wait about 30 minutes to pass though or else they'd have to drive around the long way (which takes at least 15 minutes). One guy in a van was bull thick (like it was my fault or something). To be honest, I understand. I can imagine how frustrating it is to come on to a road closure when you least expect it but honestly, at 8pm on a Tuesday evening down a country road! That's considerate if you ask me.

Maybe I'm siding with the runners as I am one. I remember running in Athlone before and the last 500m to the finish line was spent dodging cars leaving the car park. No-one wants that. It's irritating enough when you see someone already finished running back along the race route (especially if they have a medal) but cars leaving, especially with runners inside is essentially like a kick in the teeth.

As I stood at the junction, I got to watch (and chat) with all the runners coming back across the line heading back towards the water station. People seemed to really enjoy the course which was fantastic as I really love that route down around Middle Third. I've done it more times than I'd like to think so it was great to know loads of other people will know I'm not talking about Lord of the Rings when I say it again :)

All in all, it was an enjoyable evening but a hell of a lot of work and organisation goes into it. I got off light, I just turned up for 2 and a half hours and held a megaphone. I did miss running last Tuesday but I cant wait to get back behind the start line next week. The one thing I did leave with this week is a new found appreciation for anyone who organises a race. Its tough, and it must only be for the love of running (or the profit) people do it!

(Big shout out though in fairness to all the Maree marshals and organisers who made the experience all the more enjoyable for me, and hopefully the runners taking part!)
Galway 5K Series Maree Maree AC Megaphone Phil Race Running Start