Looking back at February...

on March 01, 2015
I know February is the shortest month but bloody hell, that was blink and you'll miss it. This was probably helped by both being in the thick of Marathon training and our trip to New York in the middle of it. New York was amazing, it was everything I had thought it would be and more - We had Afternoon Tea in the Ritz, Walked through Central Park, Ate Street Pizza, Visited museums, sipped many Cocktails, had a Cupcake from an ATM and more! 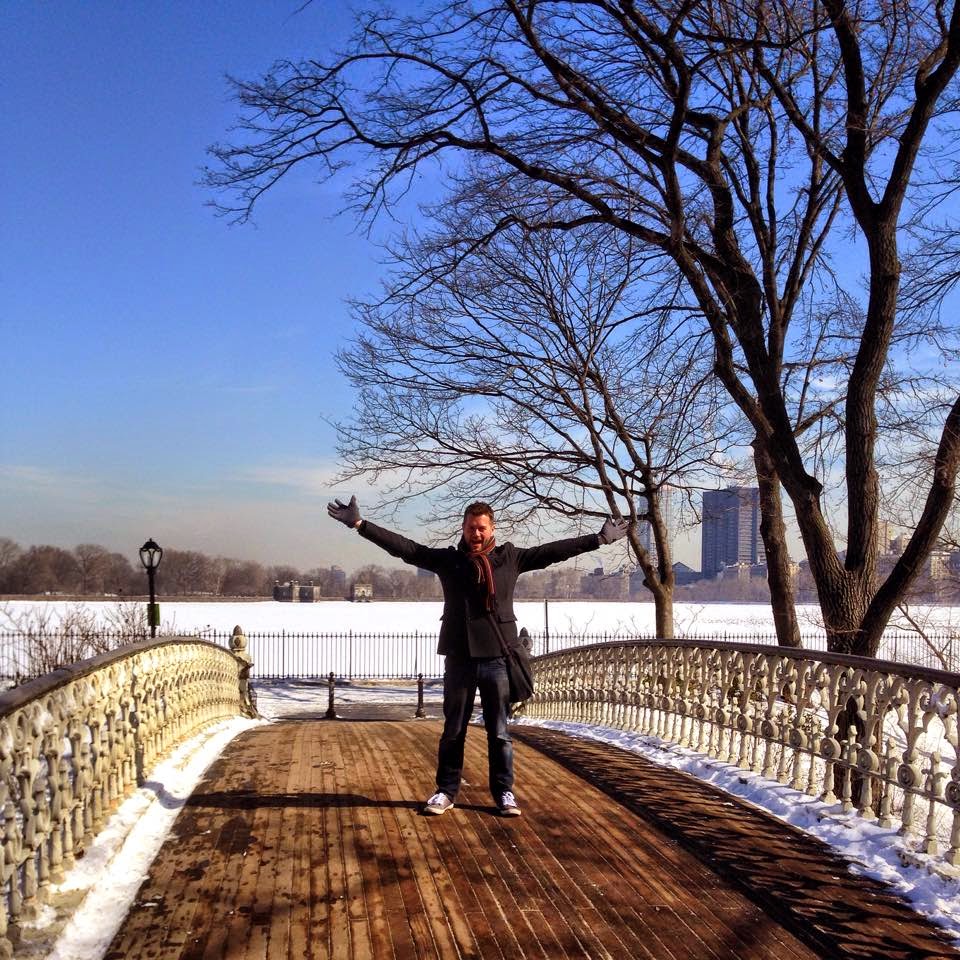 As for the marathon training, that hasn't been going so well. About half way through the month, I noticed a niggle in around my hip/glute. It just didn't feel 100% but I went on regardless. I'd asked Tom at Bootcamp if he had any recommendations and he showed me some stretches and told me to roll it out on a tennis ball as often as possible. It was like a dull throb but I wasn't too concerned about it until it forced me to stop a run half way through.

I was out for my long run on the Friday before NY and about 6K in, my hip started to really hurt. The pain was moving towards downwards my knee and was starting to affect my gait. This was a different kind of pain to my IT band which I had before. I stopped at 10K as I was afraid continuing running would cause more damage. My left glute was rock hard, it was like the muscle was in complete spasm. So I waited in the rain on a wall in the back arse of nowhere (excuse the pun) for my sister in law to come rescue me.

I had planned on running in NY but with the niggly hip/glute, I think the week off the road actually helped it more as since I've been home, I've been running without problem. The only problem with this however is I have missed two long runs! I did however go out yesterday and clocked up 21k in the rain. I felt fine afterwards so at least have the reassurance that I can get through Tralee in one piece regardless of time. I've the work put in, I'd hate to have to have deferred my entry at this late stage. 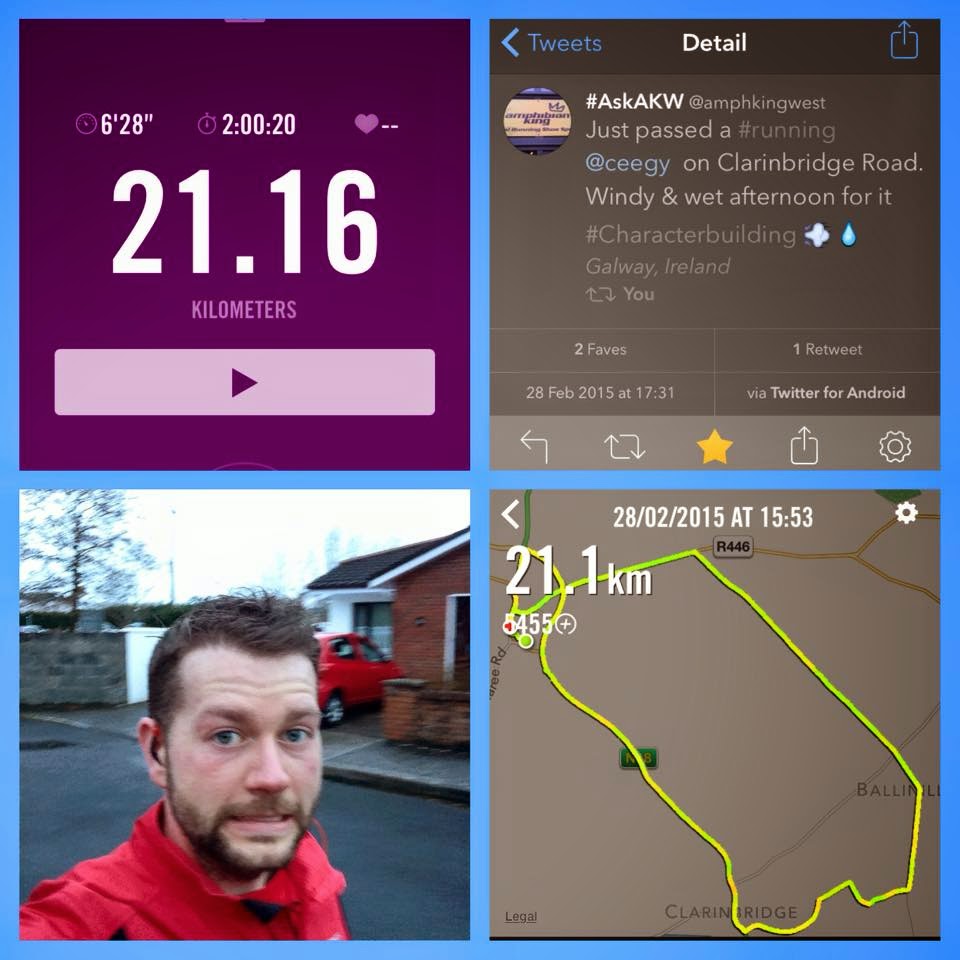 So, back my 2015 goals, lets see how they are looking two months into the year:

A 1lb loss a week will have me at goal (12st 7lbs) by June. I've been tracking towards goal by trying to keep south of the Target line and as you can see below, I'm half a pound over it but I am oh so happy NY didn't do any damage considering. I'm psyched and ready for a good March now and to bring the green line well under the blue. My current weight is 13st 7.5lbs which is a half a stone loss since January. I'm happy. 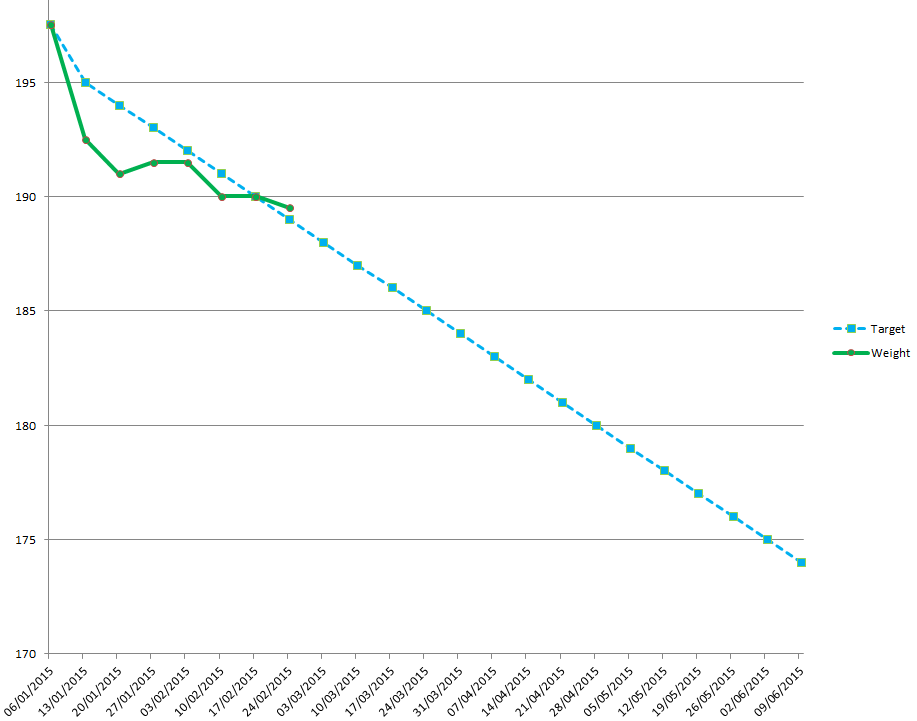 This month I clocked up 118km which is pretty poor considering my target is 170km/month if I am going to hit my 2015km in 2015 goal. That being said, the noticeable gap mid month may just have saved me from injury so I won't be too hard on myself. I have been going to Bootcamp three times a week to keep my fitness levels up. Besides, I have an 8K, 2 x 10Ks and a Marathon in March so my running schedule should be back on track this coming month.

Total Fail. My hardly ambitious goal of reading two books a month has seen me read a total of ZERO so far this year.

This weekly goal of eating fish twice a week was no problem when I was at home but I completely skipped over fish in every menu while on holidays.

Overall this month, I have no greens (oops), three yellows and one red but I'm happy. I feel getting three of these back on track is 100% doable this coming month. I'm looking forward to the evenings getting longer and starting back running with other people (Aisling I'm looking at you!). I also hope to have an extra few medals in my possession by the end of the month *fingers crossed for Tralee*
Eating february Fish Goals Green January Lights Marathon New York Reading Red Running Setting Goals Tracking Training weight Yellow