on October 07, 2013
Its not really comforting when the first thing you see arriving at a race site are the words 'Eyeball The Wall' - but that's exactly what the Athlone 3/4 Marathon had on offer today. With a race distance of 31.646 km / 19.664 miles, I was looking forward to pushing myself in conditions as close to the Marathon race day as possible. 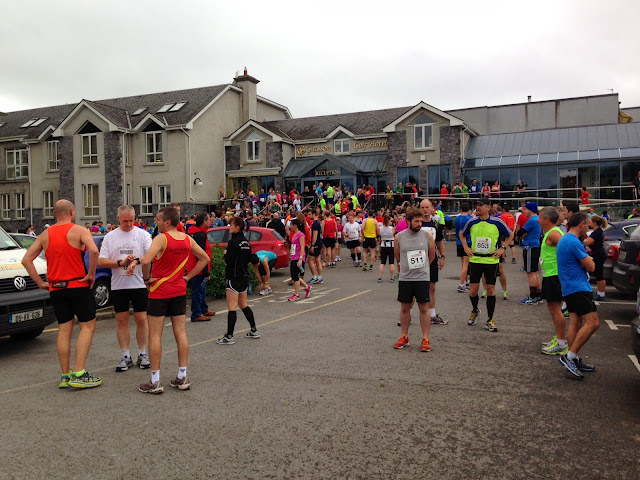 Runners outside the hotel

The race registration took place at the Glassan Golf Hotel just outside Athlone and the place was wedged. I couldn't believe how busy the place was considering I had arrived before 10am (which I thought was plenty of time). I was directed to the overflow race parking which was in a field around the back of the hotel. This meant a 10 min walk to Registration to pick up my race number before heading back to the car to ditch surplus items like the big bunch of keys I had brought with me & my hoody.

Following a brief but informative pre-race announcement about water stations, pacers etc, we made our way around the golf course to the start line behind the hotel. It was on this walk up to the start line I got chatting to a guy about his running past. He told me how he had run his first Marathon in Dublin in 1980 and hadn't run since. Next year, he wants to go for an Iron Man... so to see if its worth all the training, he is training for this years Marathon. Pretty cool eh? 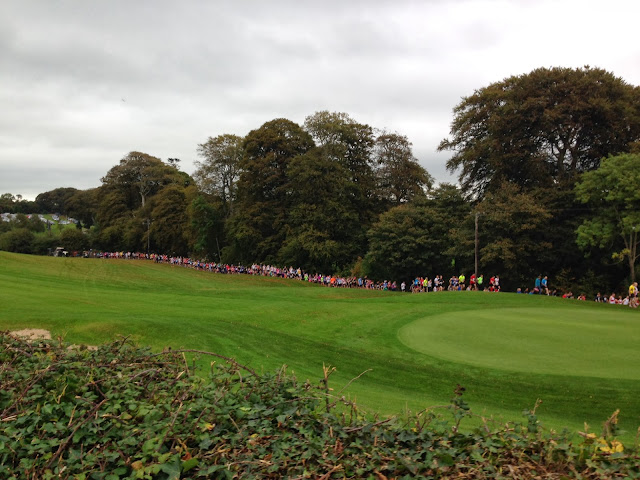 Making our way to the Start Line

The start line was a bit of a confusing mess - the race just started around me. I couldn't find the 4:00 hour marathon pacer (who I was planning on following) and people just started running - no countdown, no whistle. I figured 'Hey what the hell' and kept on trucking. I wanted to push myself to see if I could keep a 5:25/km pace for as long as I could (thats a 4:00 marathon pace). I ran the Athlone Half at a 5:00/km pace which I found fine a few weeks ago, but doubling that distance while keeping that pace up is something I am not confident in pushing for just yet... I keep having to remind myself that my goal for the Marathon is simply to finish.

The first few km were pretty leisurely but I found I couldn't seem to get past a sizeable block of people who were occupying the breath of the road in front of me. They all seemed to know each other as they were chatting away good-o to each other. Turns out, I was running with the 3:30 Marathon pacers - hence the gathering of people around them and also I had bolted from the trap faster than the 4:00 pacer I was planning on following. I am a dose! 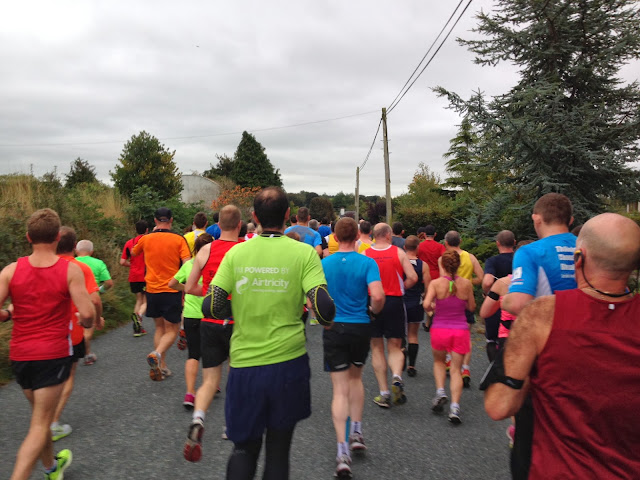 Anyway, once I realised my situation I pulled back a little. Not that I felt I couldn't keep up but rather I didn't want to push myself really hard so close to the Marathon. I've said over and over again, my main goal is to get to the Start Line injury free - and from what I have been reading online, pushing myself three weeks before the Marathon might not give me enough time to recover before the big race itself.

I've said in other blog posts before too that I learn something new every race. This race was no exception - The first water stop (4 miles) was a disaster - I hit the water stop just behind the pacers (and the massive group running with them) so the table was cleared and I had to wait for the person manning the water station to get under the table, lift up a case of water, open the water and then hand it out. I know it sounds really trivial but I had read somewhere before to bring water with you so you can skip the first station as it tends to be the most crowded at the beginning of the race.

The brilliant thing about yesterdays race was the weather - it rained for the entire thing. I imagine its as close to actual race day conditions as possible. I had never done a long run in the rain so I was curious as to how my levels of chaffing, blisters etc would be come the end of the race but much to my joy - no chaffing or blisters interfered with my race so I now know what underwear & socks I'll be wearing in a few weeks time (sorry for that visual!). Another thing I learned yesterday is that jelly babies & rain do not mix well. In fact, I had a jelly baby orgy going on in my pocket which was starting to leak white powder through my shorts (sexy I know). I am going to have to bring them in a plastic bag next time to stop them sticking together - anyway,  as I have said before... lesson learned!

The race progressed much as any other race - I performed some of my usual Carol Vorderman type calculations in my head constantly working out what % of the race I had completed every time I passed a road marker to keep my brain busy. I accidentally told myself as I passed the 10K sign "Only a Half Marathon to go"... LOL, imagine... Imagine me telling myself as some form of comfort that I only have a half marathon distance to go to the finish line. Mental.

At around the 27K mark, I came down funny mid-stride and immediately felt my right knee twinge. Shit! At that moment I had to make a decision to either keep going at my pace seen as I was so close to the end or to slow up as I was starting to hobble. I decided (hope this doesn't come back to bite me) to keep on trucking. Luckily (well maybe not for some), a lot of the rest of the journey was up-hill which offered some relief as I was naturally slowed down running up-hill.

The '1km to Finish' sign couldn't have come at a better time - It gave me enough of a boost in my step to push me down around the field I had originally parked in so I knew my bearings and knew where the hotel/finish line was. My only criticism of the race would be despite the brilliant work of the marshals, the traffic turning in to the hotel was a disaster. We were running towards the finish line around cars coming in and out of the hotel (probably other runners but still, it was handled very poorly). 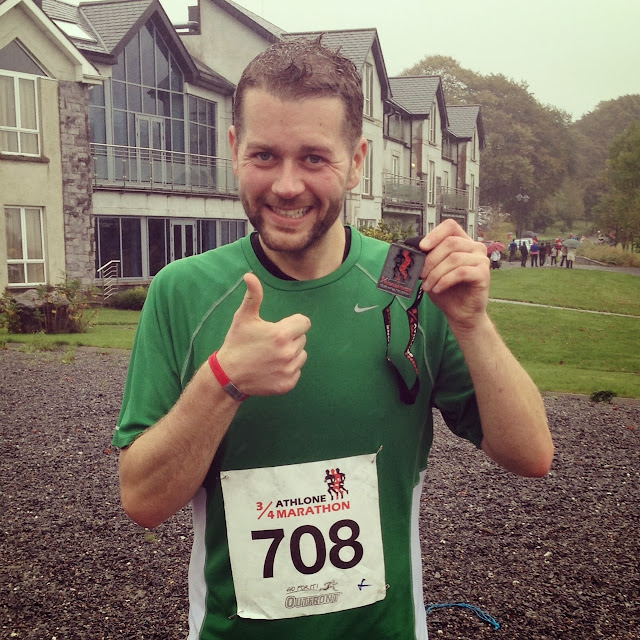 I made my way back to the car where I spare dry clothes that I had packed this morning. A quick towel off and I was in nice dry clothes (and shoes) heading back to Galway. I had also bought coke and chocolate on my way to the race - I actually think it was the thoughts of tucking in to these when I got back to the car that maybe motivated me close to the end. Either way, they were flipping delicious! I love guilt-free boldness like this. (Hey, I was replacing sugars and salts and stuff) 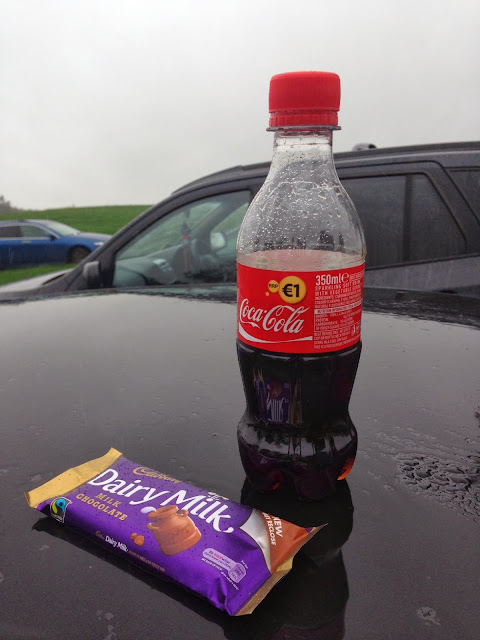 Post-race indulgence (on the roof of my car)

Last night as I lay at home on the couch watching X Factor, I got my official time through via text:

Im delighted! Now I just have to figure out where I'll pull the energy from for the final quarter in three weeks time. Either way, this was my last longest run before the Marathon, so what an epic way to end my training. I now go into taper mode for the next three weeks which I am actually looking forward to. 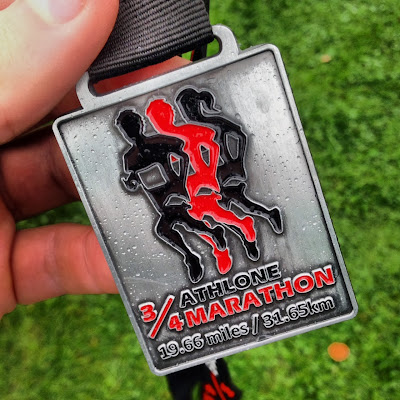 New Silverwear for my Collection