The Day Before - Marathon Diaries - Part 1

on October 30, 2013
I feel a bit like a 9 year old writing their report on their summer holidays on the first day back at school. "Hello my name is John and I found out that I like to run this year and since I saw you last I ran a marathon. It was super, it didn't rain and I loved it" would be the condensed 2 line version. If you want the full in-depth version of events, then stay reading. (Note: I had written one big massive blog post but then decided to break it up into chunks as it bored me while I re-read through it. So here is Part 1 - The Day Before.)

On Sunday afternoon, Brad and Rob picked us up and we headed for Dublin. Myself and Brad sat in the back and giggled the whole way up the motorway like two bold schoolgirls on a school tour. I think it was a mixture of apprehensive nerves and excitement mixed together but between the laughs, the slow-mo dancing and the juvenile drawings on the condensation on the windows, we made it to the RDS in Dublin for about 3pm where myself and Brad heading off to the Expo to pick up our race packs. 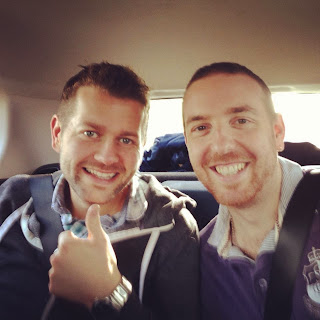 Like two hyper kids in the back of the car

The RDS was wedged - I've never seen anything like it. I've always assumed they made people go to Expos as a marketing ploy to get a captive audience to buy stuff (which is partly true), but also seeing the queues of people waiting for collect their race packs, it all made sense. I think over 18,000 people had registered to take part so they needed some system (unlike the single table manned by a single person in a school hall that I'm used to) to handle the crowds. 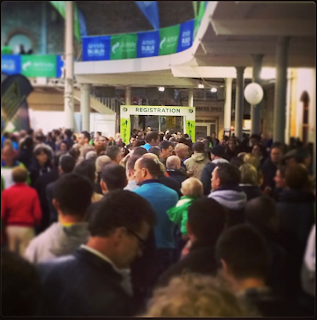 Inside the RDS (Pic courtesy of Brad)

Once we had collected our race packs, we bumped into Phil which was great as I wanted to see him before the race and was afraid I wouldn't on the day. After wishing each other all the very best and as we made our way around the stalls in the RDS, it all became very real that the marathon was about to happen. I still find myself checking other people out and comparing myself to them thinking 'Christ I bet this is yer man's 527th marathon' or 'Look how muscular she is, bet she'll fly it' - which I really need to stop doing. I shouldn't care how fast or slow someone else runs, I should only care about myself and my own performance. 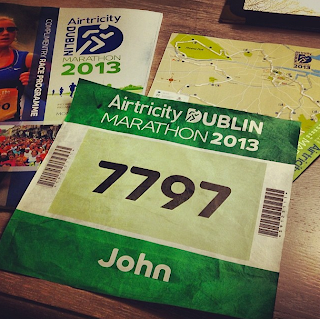 Inside the Race Pack

We also discovered the different colour bibs. Phil's was Yellow, mine was Green and Brad's was Blue. This meant that we were all starting in different waves so wouldn't be with each other at the start line. After we left the RDS, we headed for the hotel (The Westin) and checked in. The place was so swish - a total treat but feic it. I figured I deserved something lush as I was going to be putting myself through a lot on Monday. The hotel is located close to the start/finish line, is 5*, the rooms have a bath, the place is fancy and they serve cocktails - whats not to love about it!

The four of us headed out for what felt like the Last Supper at about 7pm. A friend on Twitter had recommended Skinflint as myself and Brad fancied something carb-y like Pizza or Pasta and we didn't want to venture too far from the hotel. Boy we weren't disappointed. Following a feast of pizza, mozzarella sticks and hummus, we headed back to the hotel where I found myself treble checking my gear for the morning. I don't know why I had packed two pairs of shorts but deciding which pair I was going to wear in the morning stressed me out more than it should have so I retired to bed before 10pm. Lame I know, but I figured I needed as much sleep as possible. 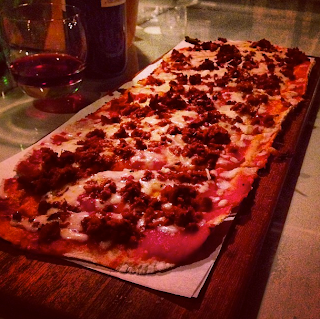