on October 02, 2013
Hello October, you crept up on me awful quick didn't you...? I can't actually believe how quickly the year has flown by. The one thing I think I'll really lament this year is daylight. When I started running back in January I didn't know any better than wind/rain and darkness, but I have been spoiled for the past six months with good weather, long evenings and nice temperatures. I've noticed its dark in the mornings when I get up, and dark before 8pm in the evening which shortens my window of time to get a proper run in after work.

But enough about daylight hours - I'm starting to sound like my grandfather!

September (like August) has been an awesome month on the fitness front but totally lame on the weight front. I have lost ONE lb. One. In a month. That being said, I have never worked as hard in my life. I run 244km... I can't even fully comprehend that distance in my head but I am quite impressed. As you can see from the tally below, I spent 22 hours running last month (that's nearly a full day). 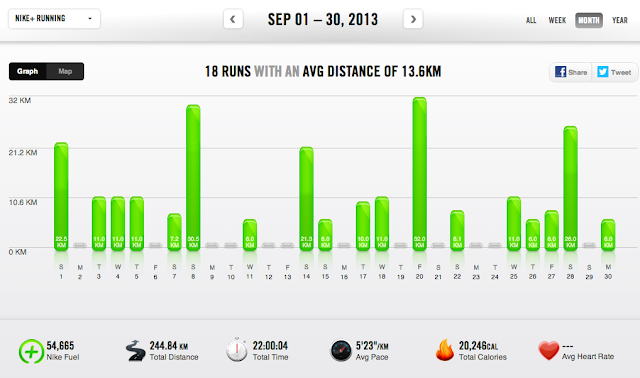 I knew that training for a Marathon wouldn't be any easy feat - but seeing the time and distance there in front of me like that is kind of scary. No more than my weight loss, I think actually knowing exactly how far you have to go at the starting point might be more offputting than helpful. Again with my training plan, I just took it week by week. I knew the ground I had to cover, I knew how long I had to set aside each week (e.g. One hour on a Wednesday evening, Three hours on a Saturday etc) so it was easy to handle on a week by week basis. 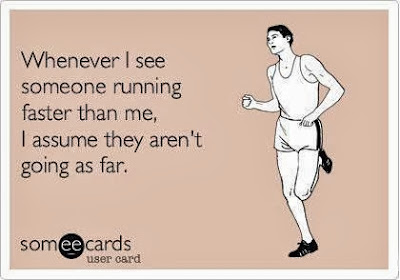 This has become my new mantra

September has also been an awesome month for the NSV's from the Weight Watchers Photoshoot (and appearing in the magazine), to being a finalist in the Blog Awards 2013. September has been my first entire month smoke free (7 weeks and counting now...) since I was a teenager so that's pretty damn awesome.

Looking forward to this month, I have the Athlone 3/4 Marathon this coming weekend (that's 31.5km) and then I am on taper (woooo!) which means I will still be running the same amount of times - just not as long/far. I'm both excited and nervous at the same time as the marathon is THIS MONTH! As I said in a previous blog post, my most important goal is to get to the start line in a fit state of the marathon. I know I have put in the time & work and I am looking forward to hitting the streets on Dublin on October 28th.

But back to right now... I am heading off to Dublin today for the #RaboTweeties tonight. I'll report back before the weekend with some quality Glenda Gilson Xpose style coverage of the event. As I'm in Dublin tonight, I'll miss my sisters birthday (how sound am I?), so I just want to wish you the happiest of birthdays Sis! 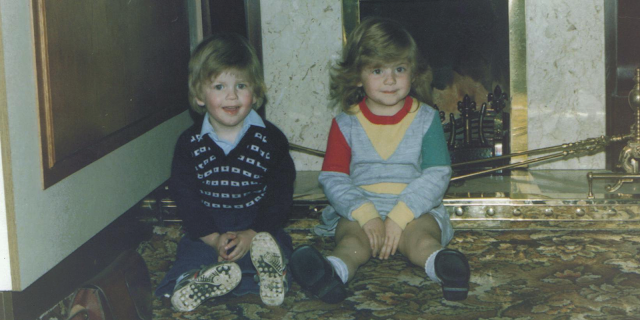 Did our parents have a buy one get one free voucher for our haircuts?