on March 01, 2013
I had set myself the target for February to beat my January score of 90.46km. Considering February is 3 whole days shorter than January, I am delighted to see my final tally for the month... 125.4km! That's a whopping 38% increase on the previous month.

I'm still in shock at the distance I covered... 125.4km is like, from my house in Galway to Charleville! Amazing :) I am a firm believer in setting yourself SMART goals! I read a quote somewhere before which stuck with me: A goal without a plan is just a wish. That has stuck with me the past few months. Instead of just wanting something, you have to realise that it is possible if you have the correct plan in place. Without trying to make you gloss over in the eyes, a SMART goal is any goal that is:


Reviewing my goal for February, was it SMART?

Even looking at the stats from the month, I spent just under 19 hours out on the road. My days haven't gotten shorter as a result, nor have I lost out on anything else by spending that time outside hitting the concrete. 19 hours averages out at 40/mins a day - and I know I wasn't out every day. For arguments sake, I'll say I spent 19 days on the road at 1 hour a day. Where did I 'find' that hour to contribute to my overall goal? 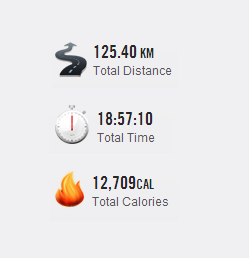 I'll tell you where the hours came from! Monday to Friday, I get up at 7.15am. This has always been the case, it's not a new development. But instead of spending 30 minutes on FarmVille before work (true story - please don't judge). I now bring the dog for a walk. I used think I never had any time for exercise but when you really look at how you spend your time, I bet there are one or two things in your life that are time-wasters. FarmVille... Hello like?!

Also seeing that I have burned up 12,709cals has been a massive motivator. Considering a man is allowed approx 2500cals a day, I have given myself a 5 day pass! 5 days worth of food just burned up and gone like that! That's pretty amazing and I'm sure has contributed massively to my continued weight loss. I am now down 61lbs since September (20lbs of which I have lost since I started running in the past two months).

To put that into perspective for myself, I just googled a Large Domino's Texas BBQ pizza (which is my favourite). An entire large pizza is a whopping 2020cals (50 WW Propoints). I have worked off 5 pizzas! Wow! I'm paying back for the past few years of neglect but slowly I'll get there :)


Now... How do I make my goal for March SMARTER than February... Simple... With Evaluation & Reward. Here is my March aim: Clock up 100km by only tracking running activities!