I had my 'Zero To 5K' running group session this morning at 8am so of course I woke at 8.15am. Not a great start to the day - especially considering today was meant to be my first run since Monday as I was taking it easy on my leg since I pulled/hurt my hamstring.

As I lay in bed staring at my the time on the phone, I had two choices... Roll over and return to slumberland... or get up and do something! The 'Zero To 5K' group meet at 8am and a second group meet at 8.40. I decided to get up and join the 8.40am crew who are a week behind us as they started later in January than we did (The 8am Group).

As 'punishment'... I walked to the starting point (1.5km) as a warm up before my run to make sure I didn't hurt my leg again. The run was fantastic! Sean (the guy who runs the group from Amphibian King in Oranmore) was great and gave me loads of tips in preparation for next Saturday's run.

At the 4K mark, Sean told me my pace was steady for the entire run, and my 'resting' run was at the same pace as my 'pushing it' run. He parted some advice which I feel may be extremely beneficial to me next week, saying how if I run at the same pace I'll be more tired on the day of the race whereas in training, if I push myself between harder and easier intervals, I'll find the race much easier.

He also made me follow his pace for the last kilometer of the run this morning and this happened: 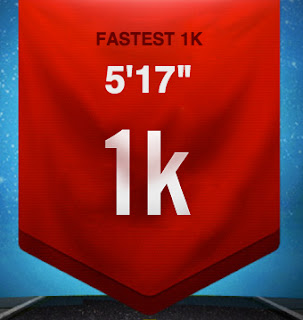 Whaaaaaaaat!? That knocks over 40s off my best 1K time. The key: Slowing down for a few seconds before going for it...

Here is what the run looked like time wise:

The first K was slower as we had to cross roads to get out of the village before we hit the main Coast Road (where we run) so ignore the 7:13 for the first K but I'm quite impressed with my times. The -7% on the 4th K was from Sean telling me to slow back a little before going for it. I don't think I've ever seen the Fastest marker anywhere in the 2nd half of my stats before.

Anyway, tomorrow is another day and myself & two of my friends are meeting up to hit the tarmac again - BRING IT ON!