And the base keeps running running...

on February 08, 2013
This day five weeks ago I had never run before in my life. I saw a friend had liked the Amphibian King page on Facebook so I went over and had a look. That was when I saw this: 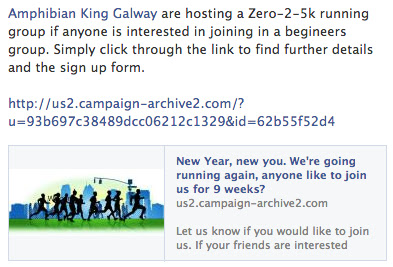 Why not - new year new me and all that - so I signed up. The first week (12th of January) had a huge turnout, so much so they ran a second group from the following Saturday. So 55 of us turned up outside Amphibian King at 8am on that cold Saturday morning and that was the very first time I ran... 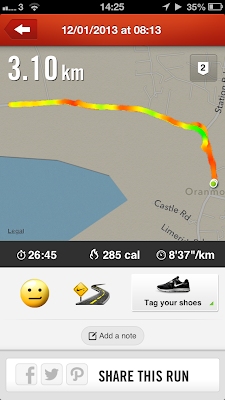 The red bits are where we walked

Our homework was simple... Repeat what we had done on the Saturdays twice during the week. Fast forward to last Saturday (2nd of February) and this is what my run looked like: 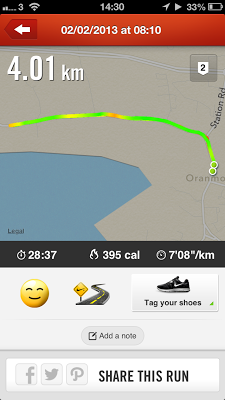 Yes there are a few yellow-y/orangey bits on the route but I couldn't believe that I was able to run properly (without walking/stopping). I did slow down just to catch my breath for a bit but I was so happy with myself last Saturday morning.

Since then, I have contracted in a very good friend Brad, who went from not running to running his first half marathon in six months. He gave me the courage & self belief to know that it is possible to get to where I want to me.

Myself and Brad have been out running twice this week and it's been brilliant! So brilliant in fact, my Nike Running app awarded me this :) 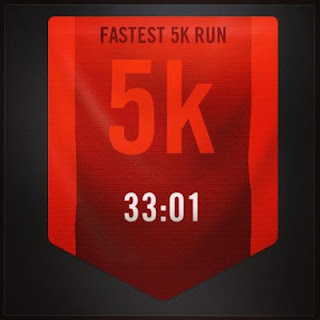 FYI: Amphibian King are a sports & running shop with stores in Bray, Oranmore and Ballymount. Check them out on Facebook here: www.facebook.com/Amphkingwest