I met up with two friends of mine Clair & Yvonne who are also running the 10K on Saturday. It will be their first 10K too so we decided to meet up today and just get some training in. Yvonne started running two weeks ago and has gone as far as 5K. As I said, my furthest distance up until today was 7.5K and Clair ran 10K over the weekend in SIXTY FIVE minutes - we were seething with envy!

As myself and Yvonne drove out to Clair's house, we were busy chain smoking and talking about how brilliant Clair was getting on with her training and how we'd be eating her dirt next Saturday. Clair has run some 5K's before so in my eyes, she's a pro! Anyway, I'm digressing... The three of us hit the road for today's session each with the understanding that it was ok to be 'left behind' - as in, we weren't going to hold the others back.

What actually happened on todays session was magical: 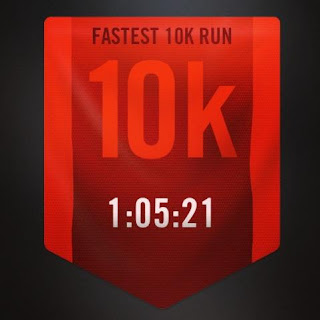 BOOM! We crossed the 10K mark in... SIXTY FIVE MINUTES! Myself and Yvonne stopped at the 10K marker and from what I can only imagine an onlooker would have though... had a fit. Oh my God! We had done it - we had ran 10K!

My target for today starting off was to run 8K and then walk the remaining 2K. I learned a hugely important life lesson today in the power of your mind. You often hear the phrase: Mind over Matter - and today delivered a massive kick in the boy-bits in terms of this. I had told myself I was going to run 8K but what happened as I approached the 8K mark... I wanted to keep going - so I did!

If I had told myself I was running 10K at the start of the run, I think I would have stopped/needed a walking break but without knowing it, my body carried me further than my mind had thought possible! I have found time after time again, once I know I can do something, I work on it! The first day I ran the 4K without stopping a few weeks ago was like a key being unlocked. I knew I could do it as I had done it once, so I done it again and again. 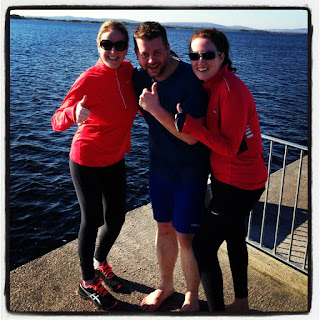 Yvonne, Myself & Clair at Annaghdown Pier 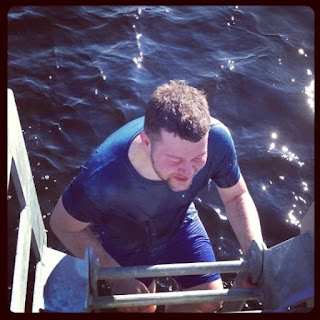