on April 07, 2014
My alarm went off at 7am Sunday morning and after a quick shower and breakfast, I was heading in to the bus collection point before I knew it (Thanks for the pre-8am-on-a-Sunday-morning lift Kieran). In the car on the way in to the bus, I wrote a little message on my hand that my other half had said to me earlier that morning. I put it there to remind me if the going got tough out on the course today that a lot of the time its just putting one food in front of the other and keep trudging onward. 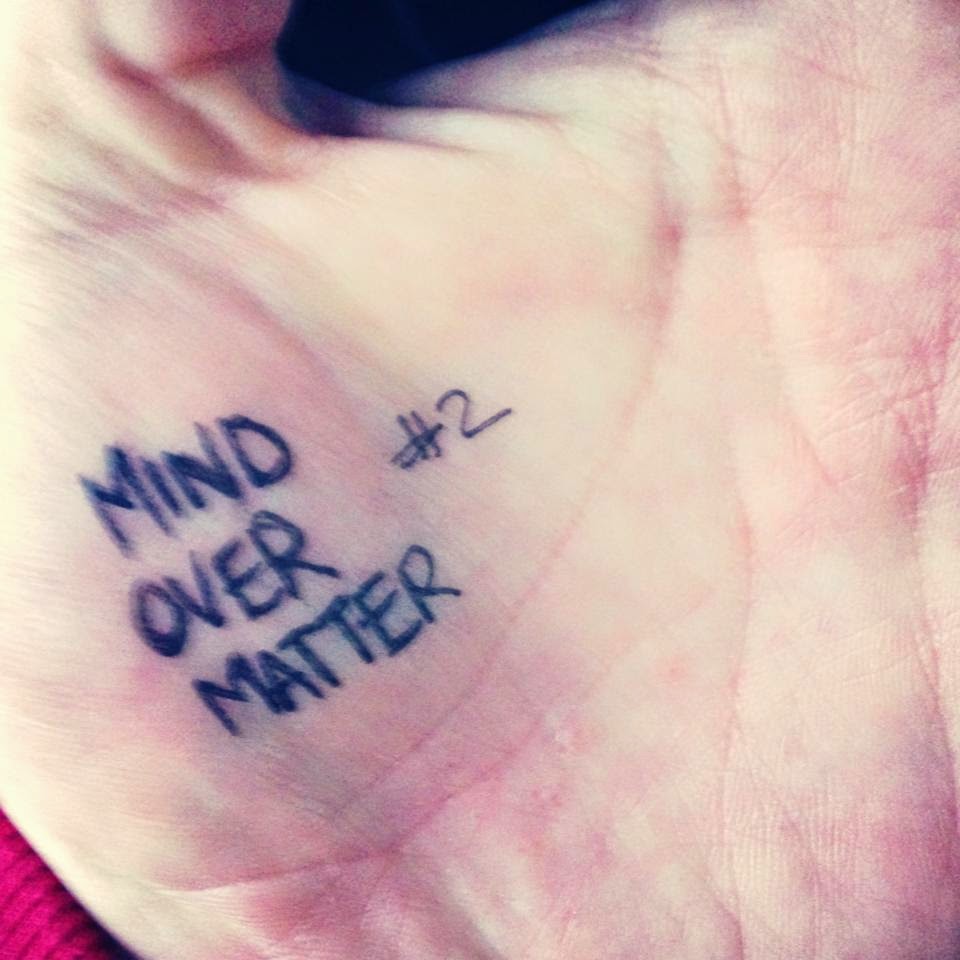 The cathedral car park was overflowing with buses and runners all making their way on board the buses to the start line. The atmosphere on the bus was one of eager excitement mixed with nervousness. I got talking to the guy beside me. This was his first marathon but from listening to him, his preparation was much more rigid than mine. We chatted about work, running and Connemara as the bus made it's way to the start point for the full marathon.

There, at the side of the road somewhere along Lough Inagh in Connamara, the bus pulled over and off we got. We were the first bus to arrive which was great as everyone had time to use the port-a-loos and find a spot on the side of the road before about 10 more buses pulled up. There was about 600+ people waiting at the Start Line for the Marathon. 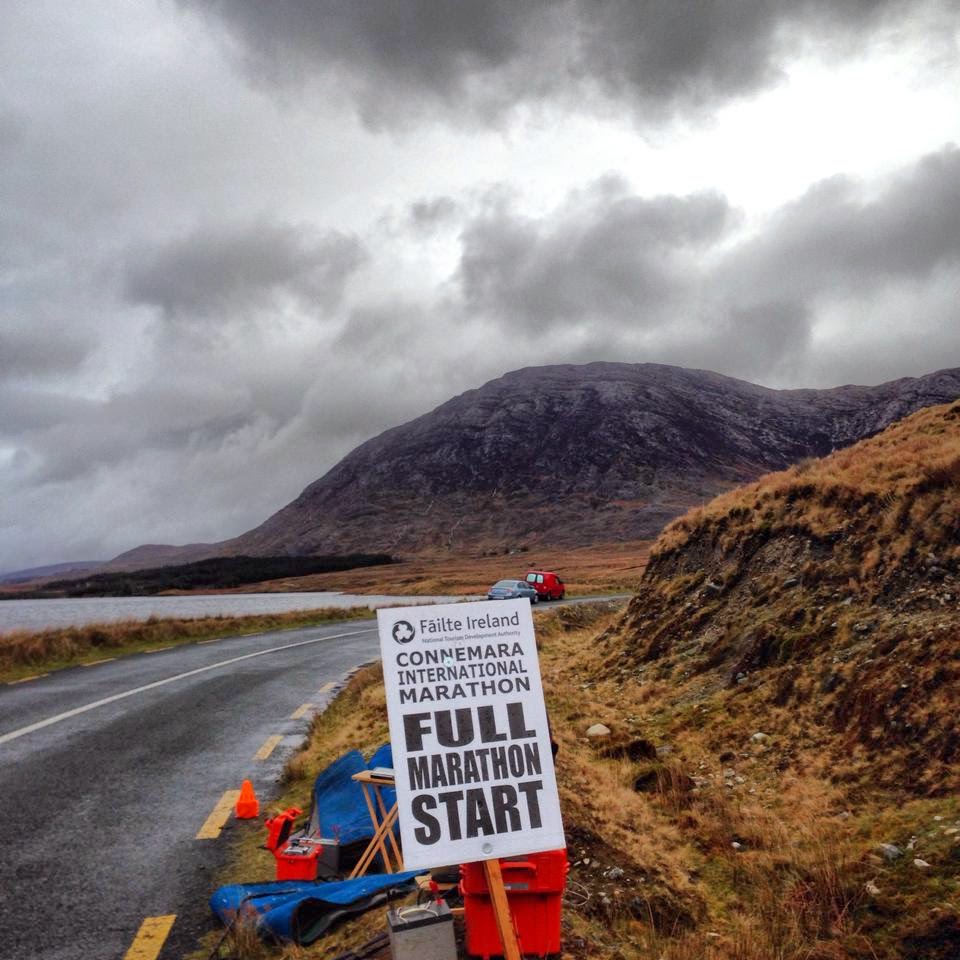 Just before 10:30am we were all gathered at the start line as the first of the Ultra Marathon runners passed us. Jay-sis! I was talking to a few people in the crowd about how mental it must be for the Ultra guys having to run 39 miles when I said 'I'm sure all the people at the start of the Half Marathon are saying the same about us'. That's what I love so much about running. Every race, any distance is a challenge for the person running it. You can push yourself beyond your own limits and thats the real beauty of running. 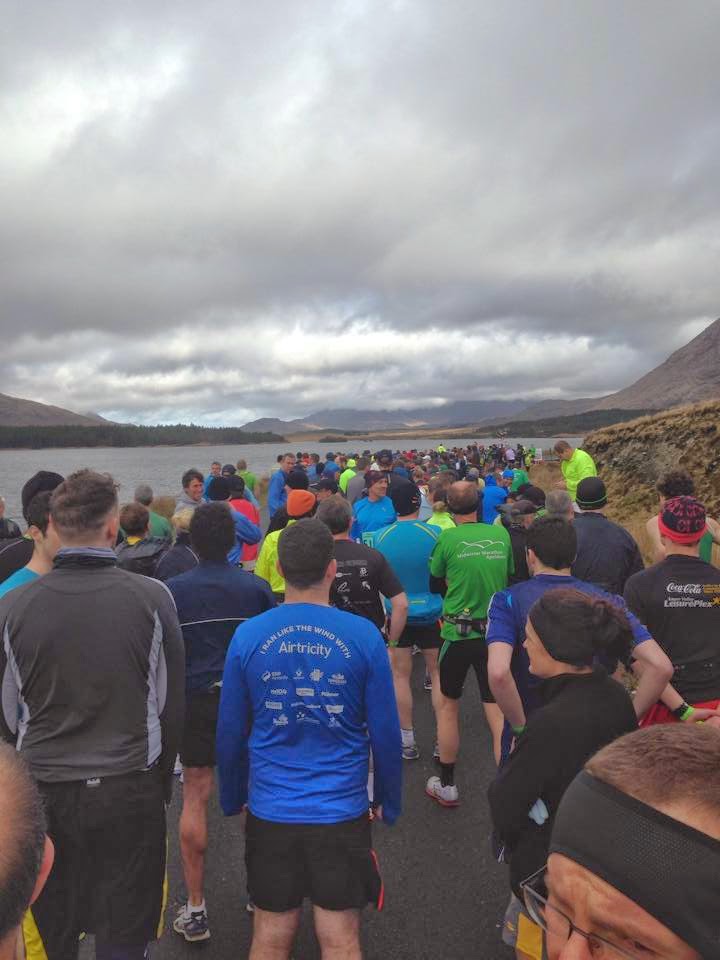 Waiting at the start

At 10:30am on the button we were off. The first 10K flew - I was in the zone, I was in my stride and I was happy out. Despite the overcast morning, we were waved on by a beautiful rainbow which came across the mountains as we ran along what has to be one of the most beautiful roads in Ireland. At 10K we turned on to the N59 which is part of the Connemara Loop. I happily plodded along maintaining a consistent pace as we ran alongside Killary Harbour.

I hit Leenaun (Half Way) with 1:45 on the clock. I was delighted with myself. I had maintained a 5 min/km pace for the first half of the race (which is only 4 mins slower than my best half marathon time). Maybe I should have read this as a potential warning but instead I got carried away with myself and started to think that a 3:30 marathon was on the cards... Big mistake! 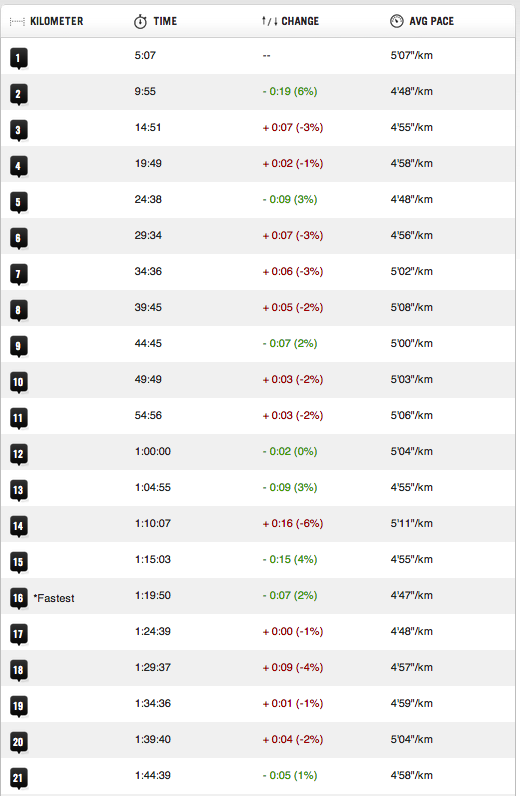 Something that I have been in denial about since the first day I ever signed up for this marathon was the course profile. I have heard many people (even as recent as during the bleedin race) say that the second half is a much tougher course than the first. I knew there was a incline as soon as we got outside Leenaun so I wasn't surprised to see it - I just wasn't expecting it to be so... incline'y.

From about Mile 14 on, it was a completely different run. I found myself mentally having to push myself onwards. It was nice to catch up with the Half Marathoners which started at 12pm as it meant there were more people around. Interestingly, I found the pace of the crowd extremely off putting. As glad and all as I was to see lots more people, when you are trying to motivate yourself to keep running and everyone else is walking, its extremely difficult.

I bundled on past each mile marker, recalculating the % of the race I had completed once I passed each one. Up and down up and down. I stopped and walked through each water station, partly for the break, partly because my legs were starting to burn. You can see from my times, I knew about about 30K that my short lived dreams of a 3:30 marathon were starting to wash further and further away.

At about 37K I reached the dreaded HILL! This was the one everyone had been talking about on forums, on Twitter and in person. This was the most horrific thing I've ever experienced for so many reasons. It was raining. It was extremely windy and you were completely exposed on top of the hills of Connemara. The worst part was that you could see for miles. You knew exactly how much further you had to go.

I walked a lot of this part of the course. Mainly because my calfs were starting to scream at me, partly because I was resigned to the fact I didn't think I'd be able to beat my Dublin time (3:52) by this point. At the top of the hill (Mile 24), this wonderful man coached me and gave me the spark to keep on going... He was like 'Cmon, we are so close and so nearly there. Get in under 4 hours!' and with that he was gone ahead and I fired on after him.

Around Mile 25 when everything started to hurt, a girl with a Marathon bib beside me gave me a pained look. I paid the kindness that was shown to me on and I caught her arm and said 'Come on, we can do this... I can see the roof of the hotel at Maam Cross, thats the finish line!'. The two of us ran together for the rest of the race.

As I passed the sign for Mile 26 I started to well up when I saw the clock, it was 3:50. I was going to come in under my Dublin time! Despite this being one hell of a challenging course, I was going to beat my 1st marathon time. That was when I saw my other half, my mum and my dad cheering from the crowd around the Finish Line. 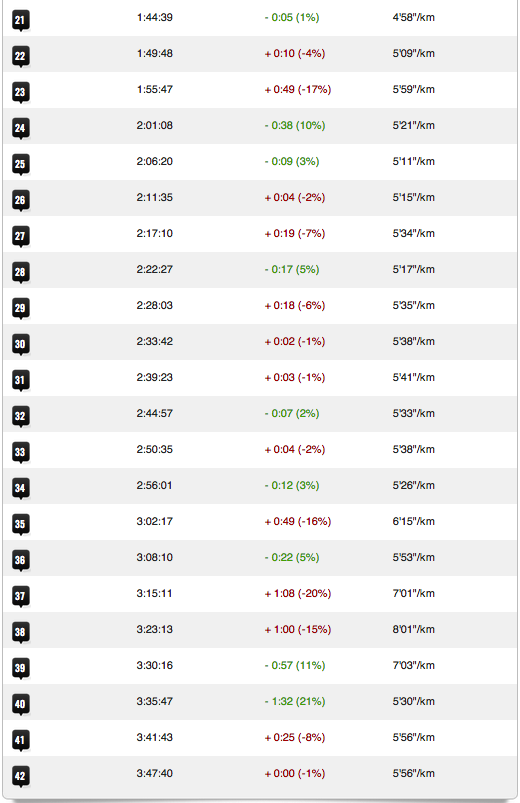 Broken, in pain but oh so happy I got the biggest hug from my other half. It felt like it took away so much of the pain that was flowing through my body. I remember being sore after my first marathon but not this sore. I collected my bag from the baggage area and hobbled along to car. Praise be to the Running Gods that I didn't have to get on the bus back to Galway as I think that would have killed me! After celebrating for a few minutes with my parents, we headed back to their car which was loaded with sandwiches, a flask of tea and muffins :) 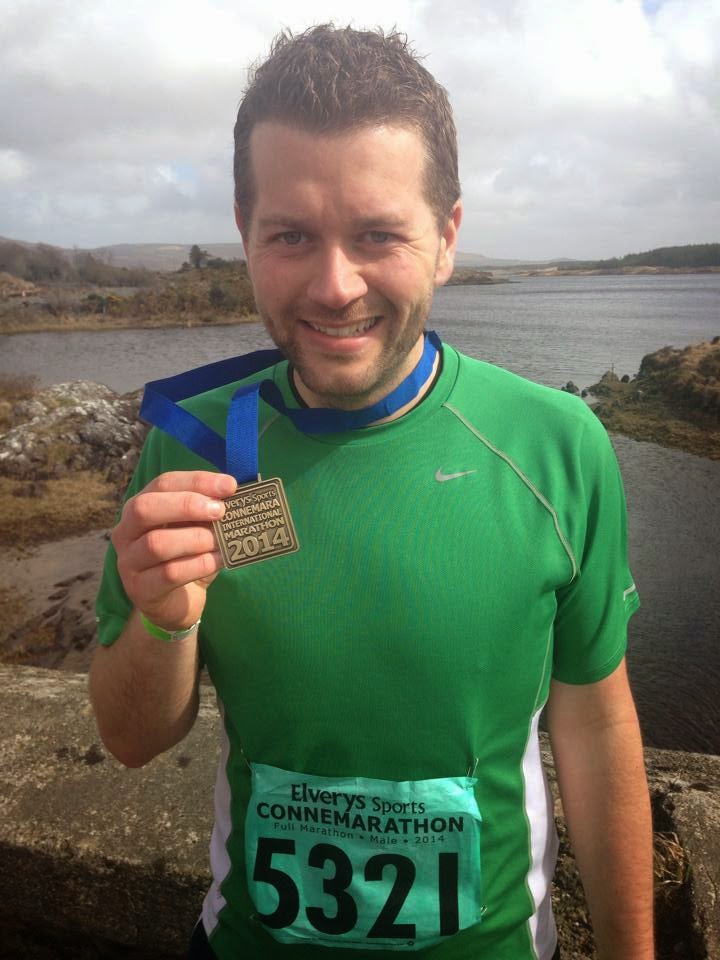 I came, I saw, I beat Connemarathon

Standing at the side of the road at Maam Cross about 10 minutes after I finished - my legs went into complete spasm. I had to lie on the ditch at the side of the road and hold back the tears as I could see the calf muscles in my legs spasm and contract. I think it was more horrific than the last few miles put together. When I eventually climbed into my mum's car (this was due to the embarrassment of everyone stopping to see if I was ok), I has thankful - thankful that I get to run, yes a consequence of this may be painful leg cramps but to experience both extreme joy and pain at the same time is rare I'd imagine.

Marathon #2 was without doubt 'My Marathon'. I ran it alone, for me. I knew no one else doing it. I trained on my own. I knew I wouldn't meet anyone at the finish line who experience it the same as I had. It was a completely different experience to Marathon #1. I reckon across the 26 miles there was about 50 spectators unlike Dublin where the streets were lined. The profile was completely different, my energy and self belief were completely different. I always knew I was going to finish Dublin regardless of what happened. I knew I'd finish Connemara too but I didn't know how much I was going to have to dig deep and pull myself together to do so.

Overall I'm delighted. Considering 18 months ago I was a 19st smoker who had never ran more than 20 seconds in his life before, here I am nearly 8 months off cigarettes and with 2 marathons in the last 5 months under my belt. I'm excited for my next challenge... Stay tuned :)