Review of May & Goals for June

So... I ran the Burren Half Marathon on May 25th (Blog Post Here) in 2 hours 1 minute. That is pretty bang on my goal. Still raging about that minute at the end but do you know what - it's motivated me so much that I've already signed up for my next Half Marathon - The Rock n Roll in Dublin on the August Bank Holiday weekend. I'm really looking forward to it actually.

My 2nd Goal was to Top Aprils Figures 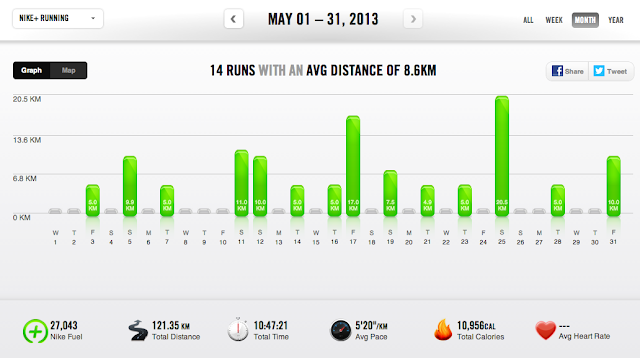 My reward for May was going to be a new pair of running shoes - but seen as I have two pairs already I have decided my money would be better spent elsewhere as a reward. So I have booked flights to London to see Viva Forever in the West End before the show closes at the end of June. I'm so excited. It's such a treat but I can't wait! Feic it - I deserve it :)

June is going to be a funny month as I have nothing really planned for this month unlike last month. Bootcamp has finished and I didn't sign up again for the next round of it. The 5K Series is nearly over and I have yet to sign up for a race so I'm finding it quite difficult to pin down goals for the month. I was at the Physio during the week thanks to my sore knee following the half marathon and get gave me a load of tips and advice. With that in mind, my first goal for this month will be:

My second goal is more to keep me in check - I plan on matching what I have done in May. While matching my previous months work is not really pushing myself, I feel it is a high enough bar to aim for. Excluding the Half Marathon, I ran 100K - the first time I've managed to do that in a month despite it being a goal since April.

When you add in the Cross-Training session (not running), I think it is a sufficient enough challenge to keep me focused throughout June before I head off on holidays in July and then have the Half at the beginning of August.

Using my SMARTER rules from the previous month, everything will stay the same except for my reward which will be something holiday related. New clothes perhaps?