on June 05, 2013
Yesterday was Race 6 of 6 in the Galway 5K Series so there was a huge sense of achievement in the air as we arrived in Tuam for the last race of the 2013 Series. The sun had been shining all day so I was really looking forward to getting out of work and out to Tuam to get started. I met with Clair, Brad & Sinead in Claregalway and we drove out to the Ard Ri Hotel in Tuam to the starting line where we met up with Yvonne and Gordon. 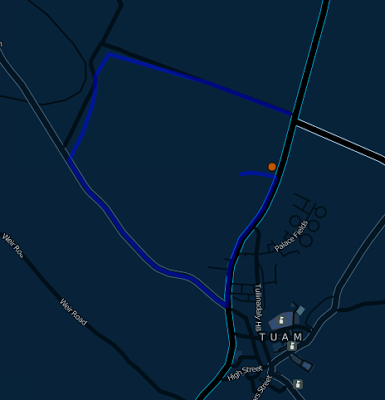 It was so great to have all 6 of us back together for the last race following the two weeks of injuries between us. I think each of us should be really proud of what we have accomplished over the past 6 weeks. I think the benefit of running chipped over 6 weeks has stood to all of us. Our times (good bad or indifferent) are a great thing to have as while any of us can go out and run a 5K in the evening as part of training, there is something a little extra about running in a race. You push yourself that little bit harder than you would on your own so the benefits of running in a race are larger than running solo.

The race started bang on 8pm with a crowd that seemed larger than any of the previous weeks. I took off at speed semi conscious of my knee which actually didn't act up at all so I was grateful for that. The course itself was nice, a few ups and downs but nothing too hectic like some of the other races. 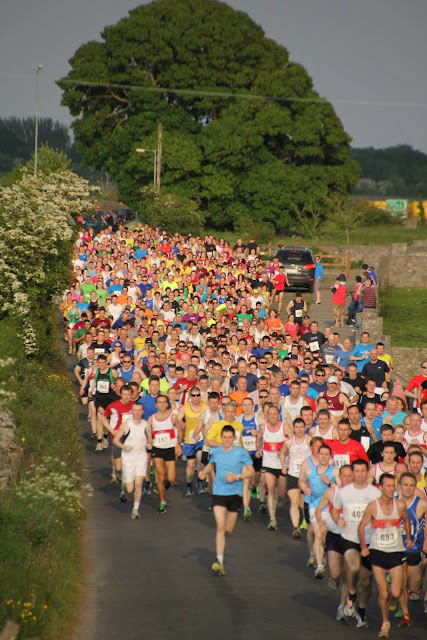 And they're off (Pic taken from George Reid's Facebook)

I don't know whether it was the heat, my base layer or the my overall energy level, but as we turned the corner at the 4K mark and headed back uphill towards the Ard Ri Hotel, I started to feel a bit light headed. I knew by my times I was pushing myself and my brain was telling me to chill the hell out and take and easy. I did struggle with the last kilometre worse than I have with any of the other races. My body was tired - possibly due to the fact this was my 3rd day running in a row (Blame the Bank Holiday) or perhaps since my knee hasn't been at me, I've been out on the road a bit more in the past few days.

Something that annoys me is the signs indicating how close you are to the finish line. I don't want to know. I prefer running in ignorance as to how far I have to the finish line. Seeing the 500m sign really put me off. In my head the finish line is always just around the corner once you hit the last K, so seeing that spraypainted on the ground really threw me off.

As I turned the corner at the Ard Ri Hotel I was expecting to see the finish line right there at the entrance to the hotel... Oh how wrong was I. It was about 250m further past the hotel down into an estate. What was different about this race is the whole course and especially the finish line had a load of spectators (probably brought out by the good weather), so seeing the finish line with a crowd of people around it really pushed me on the last few meters and over the finish line in what I knew was a good time (despite not seeing out to break any PBs yesterday). 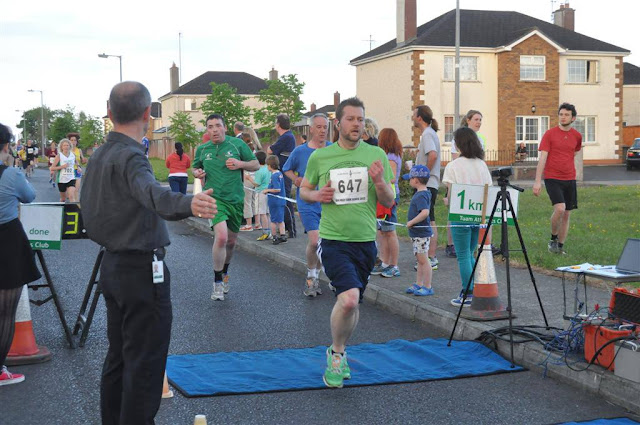 My Official Chip Time: 23m 13s - knocking 9s off my previous Personal Best in Craughwell two weeks ago. I'm absolutely thrilled. Not to be a Pessimistic Paula about it but I kind of wish I had had that extra little bit of oomph in my yesterday to get me across the line in under 23 minutes. That being said, what better way to finish the 5K Series than on a Personal Best. I also clocked up my fastest ever kilometre of 4m 14s. Even I'm impressed with myself for that one.

After the race finished, we all headed up to the hotel to collect our coveted Galway 5K Series T-Shirts which they give out to people who complete in 4 of the 6 races. The hotel had tea, coffee, biscuits and hot finger food for everyone - it was actually a lovely way to finish the Series off. Thank you Tuam, Galway, Craughwell, Loughrea, Claregalway & Athenry. You have made me experience a massive flavour of running in different conditions (rain, sun etc), with different courses (hills, flats etc) over the past few weeks. It's been fun! 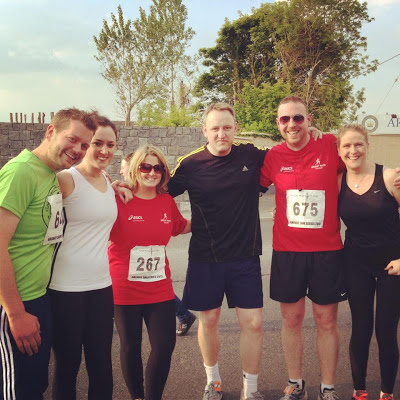