on June 22, 2013
I went to Ennis after work yesterday evening to get my race pack before today's Clare 10K race. I queued up in the Clare People Newspaper office to collect my chip, bib and get my t-shirt which was available to the first 1000 people who registered. They only had small t-shirts left. I'm optimistic and everything but not THAT optimistic. I still took one anyway. 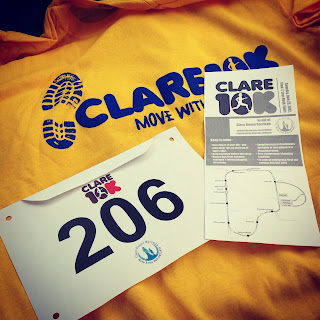 After I collected my race pack, I went for dinner with my parents and sister and even witnessed a Guinness World Record attempt of 'Most Tin-Whistlers in the playing the same song'. 500 tin-whistles going off at the same time has probably resulted in me never being able to hear anything over 15,000 Hz again but it was kinda cool to see it.

Anyway, I got home and chilled out for a bit before hitting bed around 11.30pm to get my rest in before the race. The alarm clock going off at 7am nearly caused the dog to shit himself but it was hilarious at the same time. I had my porridge and tea while chatting with my Mom & Nana while the rain belted down outside. At 9.30am, Mam dropped me up to Lee's Rd - where the race was starting at 10am. 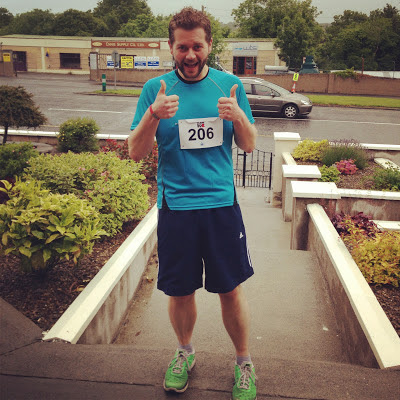 I had half an hour to get in some stretches but I always feel like a pleb beside seasoned runners who are doing all these odd looking lunges and ankle rotations while I'm there touching my toes. We all gathered behind the start-line at about 9.55am when they announced the race would be starting shortly. The one thing I learned from the Galway 5K Series is the importance of where you are placed at the start of a race.

I'd never given it much consideration before I started running but I do think having pacers is great as it gives people a space to position themselves with at the start of the race as opposed to having everyone in one big mix. I took my place about half-way along the start line as thats mentally where I have placed myself. I do admit I am quite envious of the runners right up the front who are poised and ready to go - one hand on their watch ready to hit Start. 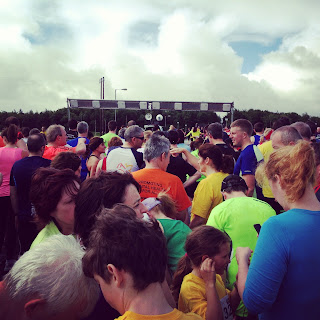 The race started and off we went! The road out from Lee's Road is quite windy and it took me the first kilometre to find my pace and space in the crowd as we headed towards the Lahinch Rd. My pacing was good and I found my rhythm early on. The race continued past the Tech School and up to the Club Bridge.

I have read online numerous times that the #1 rule for all runners is: Nothing new on Race Day. So what did I do... Something new! I read online during the week about this 3/2 breathing technique which basically is to breathe in for 3 strides, out for 2. The reason apparently is to ensure you alternate feet for the start of each in-breath. I have to say, I found it really really amazing. It would calm me right back down if I felt my heart was going too fast. It's definitely something I'll be doing again. It also helps keep your mind on counting rather than the road.

I passed the 4KM and 5KM markers in what felt like no time - and I was looking forward to the 6KM mark as I knew it was right outside my parents house. Sure enough as I passed, there was my Nana standing at the door waving across at me :) Nothing like a bit of family encouragement to put a pep-in-your-step.

The 7KM marker felt like it would never come soon enough as we ran down the back roads from Ballyalla to Drumcliff. It's a narrow country road with cows and brambles either side of you. The smell was... country-ish to say the least. I hit the 8KM marker at 38 minutes and I knew my Sub-50m goal was achievable. I didn't want to count my chickens before that point but once the little man living in my Nike App told me of my time, I gathered speed.

There was a bit of a hill just before the 9KM mark but I managed it pretty well. As I passed the 9KM sign, that was when I saw him... 'Him' being the randomer in front of me I picked as my marker to pass. I was running side-by-side with him as we passed the 500m to go sign and that was when I took off. Whatever energy I had in me I pushed it all out and upped my pace. Upon seeing the finishing clock, I couldn't believe it as it approached 47 minutes. I nearly bust my gut but crossed the line just before it turned into the 47th minute. 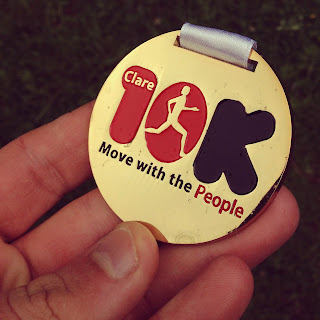 Across the line, I got my medal and a rehydration pack with water, a banana and a chunky kit-kat! (nyom!). Just now as I finish typing this blog post I got my official time via text...

I've just knocked 5 whole minutes off my Personal Best for a 10K!