on June 19, 2013
The last few weeks have been a series of up's and down's in terms of weigh-ins, but this week's brings me dangerously close to my red line. The red line is my projected target weight and as long as the blue line (actual weight) has been below that line, I've been happy. This week I'm half a pound off crossing that line which would be the first time since I started Weight Watchers nearly 10 months ago. 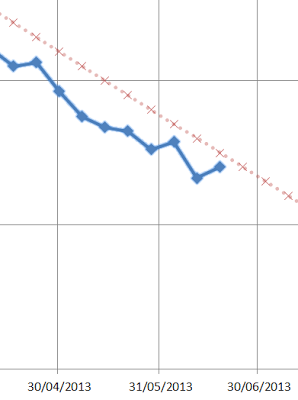 I got my 13th Silver 7 at Weight Watchers last week and that came as a shock to me. I really wasn't expecting it last week, but with a 4lb loss last week, it pushed me even closer to my goal weight (8lbs off goal). This week I was up 2lbs bringing me back to 10lbs away from goal. Looking back at my week, I had been for a number of runs covering just under 40KM in the week.

I think I've been hit with that over-confident/lack of self-restraint bug which comes along once in a while. I think because I was still on Cloud 9 from my 13th Silver 7 along with the feelings of 'I've worked out I deserve it', I let my guard down and slipped up a little on the food front. I didn't make wise choices and it showed this week on the scale.

Just so you know, I'm totally ok with the fact I was up this week, and I am not being negative or down on myself because of it... I just want to learn from this experience to continue to improve. Having off/down weeks is absolutely fine - the kick in the teeth comes when you think you've done well and you haven't. Thinking back on my week now, I see I fell victim to probably the biggest weight-loss/fitness trap going - this one: On Friday evening we had friends over and with that we had a big roast chicken dinner with the works. Stuffing, Potatoes, Roast Potatoes, Maple Roasted Veg served with mounds of Gravy. For dessert of course we had to have cupcakes (which were delicious). 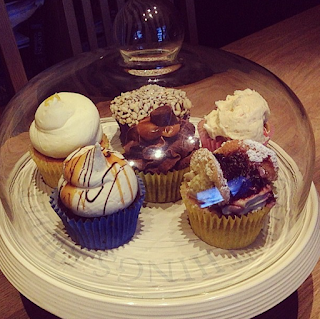 
It was my grandfather's birthday on Saturday and I knew I'd be around a load of temptation - so by going for a 10K run earlier in the day, I felt I had earned my party entry come Saturday evening. The party was great but I overgrazed on everything from cake to pringles, jellies to marshmallows. I stayed nibbling on the jellies and marshmallows as they "aren't as bad as chocolate". Likewise the cake was Lemon Curd so wasn't "as bad" as something chocolate-y.

Sunday was Fathers Day so of course I had the big fry-up at home my mum had made - Beans, Rashers, Sausages, Toast. Again the works. When I got back home, I was still tired from the party the night before so went to bed in the afternoon. When I woke I was hungry and went straight for the press where instead of making myself something proper to eat, I continually grazed for the evening - grabbing things that I knew weren't good for me but would curb the craving for half an hour.

I knew this week's weigh-in wasn't going to be pretty - and I know I have slipped up before and been up. But seeing the gain that I had put on over the weekend despite a pretty active week on the exercise front just proved to me something I had read online before but never really paid much attention to:


You can't out-run a bad diet

This brings me back to other quotes I have seen which I know to be true but am posting them here so I can remind myself from time to time if I ever need to look back:

These quotes make so much more sense to me now than they ever have before. Running and exercise is great, but if the mindset isn't on the same level - you can run as much as you like, you won't counteract a bad diet. As I said at the beginning of this post, this isn't a self pity or woe is me post, more so I'm just transcribing what I am thinking right now. A friend recently said to me (in jest) "Is it true... Does nothing taste as good as skinny feels?" to which I replied "No, Everything 'bad for you' still tastes flippin amazing".

I had a great week last week celebrating my grandfathers 80th with my family, having friends over for dinner and doing various other bits and pieces but I made a series of poor choices. If I could change anything - would I? No. I can only move on from last week looking forward. I've even gained little bit of knowledge about myself after this week - You can't outrun a bad diet. I've said it before and I still stand by it - I thank my weigh-loss success on the changes I made to diet & eating habits. The running came later and sure it is fantastic, without getting the foundations correct, I'd never have been in the position I am in now to be able to run & enjoy it.